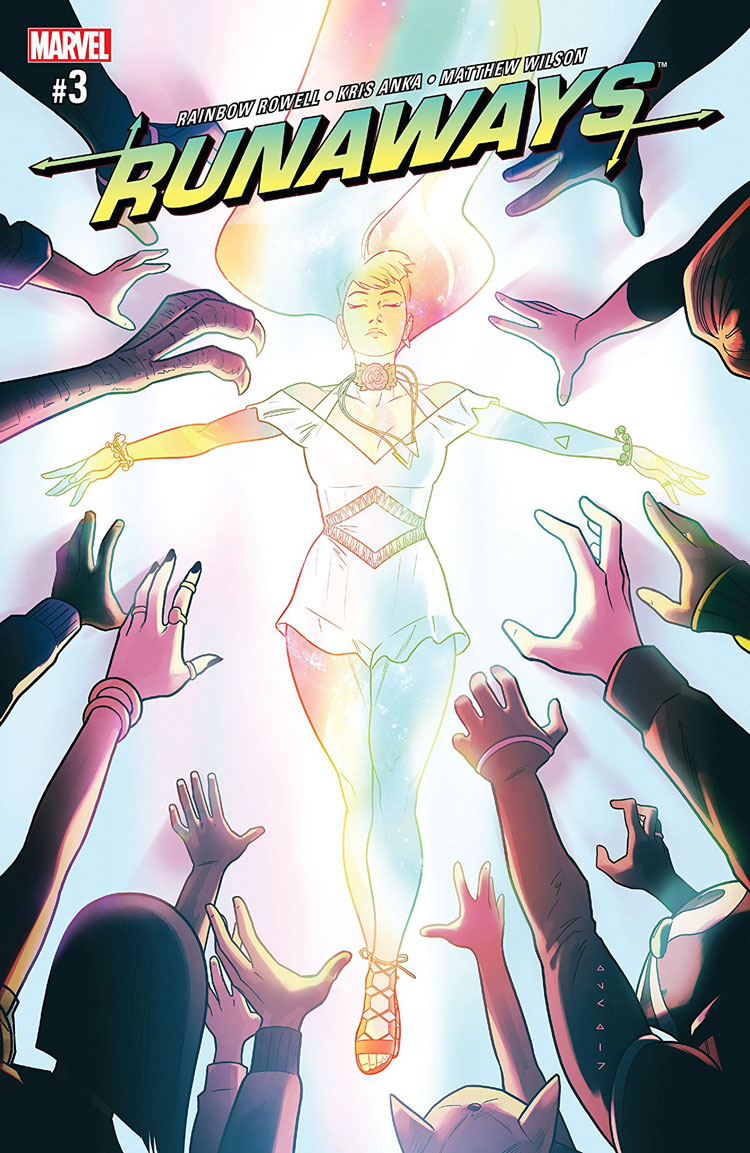 The Runaways was a group that formed more by happenstance than intent. Like the recap page says in this current series, the six teens who comprised the original group were escaping their evil parents. In this latest issue, we see the classic story of friends reuniting after a long time apart.

Karolina Dean was the most Hollywood of the group—her parents worked in entertainment—but she was never aloof towards the other Runaways. Especially with Nico, Molly, and Chase, Karolina was a loyal sister, best friend, and sometimes love interest.

It’s thrilling to see Karolina back in the pages of comics. I don’t know if she’s appeared since Avengers Arena #13 in 2013. Karolina was happily dating Julie Power at the time and was still tight with Molly.

In this current issue, Karolina is now a student at Pomona College, she has a girlfriend, and she’s actively pursuing self-care. We see her in her dorm room with her light-emitting appearance uninhibited by the bracelet she usually wears. She’s repeating affirmations to herself, including “I am my own person. My parents’ decisions don’t define me.” She’s listening to music and dancing.

It’s no wonder then that Karolina is reluctant to give up her positive status quo to rejoin her old friends. The dialogue between Karolina, Nico, Gert, and Chase is wordier than necessary, but Rainbow Rowell lets each character’s feelings shine through. Gert is the most unhappy, and I love her conversation with Chase.

While to others she’s been dead for two years, to her it was just days ago that she and Chase were unquestionably in love. All of the uncomfortable emotions are drawn to perfection by Kris Anka, most notably Nico’s partial frown as she leans against the windows.

Matthew Wilson deserves acclaim for Karolina’s brilliant, multi-colored look in the first two pages. The details all add to the immersion, from the different colors on the flower petals on Karolina’s shorts to her mismatched colored socks. Anka and Wilson add some comedic beats that land perfectly, like when Karolina’s next door neighbor opens the door to find Old Lace in the hallway. One panel that mesmerizes with quiet emotion is a wordless panel where Nico is looking out the window while Karolina is looking down, at a loss.

Rowell, Anka, Wilson, and Caramagna are creating a true thing of beauty with this series. Despite the verbose and possibly cluttered dialogue, Nico’s uncertainty about her ability to move on rings true, as does her willingness to go along with Gert’s reunion desires. It’s heavily teased that Victor is alive. Meanwhile, Molly is in danger, and I can’t wait to see Molly reunited with Gert, Chase, and Nico.

It’s a bummer that there’s no clear indication how Karolina will fit into this series’ future, but I’m sure the creative team will weave her in, especially with Molly’s imminent return. There aren’t many prominent lesbian characters in Marvel comics, and Karolina is one of the most beloved by fans.

Rowell and the creators write a compelling story about friends reacting to each others’ growth and new chapters in life. Runaways packs an emotional punch on every page in the best way.