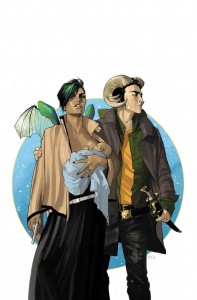 Saga….what an appropriate name for what could be the most epic comic of 2012. I don’t mean that in the bastardized form of the word as is used in ‘epic fail’ – I mean it for what it truly is: epic. This is a grandiose tale from the first page, told in an amazingly personal and unique way. The narration of the first issue is a brilliant stroke of writing from Brian K. Vaughan and this issue reads as part memoir, part space-saga. There is a great amount of action and tension in this first issue as Vaughan drops us right into the middle of an inter-stellar war following deserters from both sides of the battle in a race to save themselves and their child. Doesn’t get much more intense than that, does it? Vaughan pulls no punches with this first issue: there is all kinds of controversy including breastfeeding, the birth of a child, all kinds of profanity and some very…odd moments for lack of a better term. This series isn’t for the easily offended: it’s not by any means the wildest book on the shelf, but it is pretty wild to say the least and the raw writing style employed by Vaughan is part of what makes this book what it is. Vaughan does an excellent job with this double sized issue of giving readers just enough information about the series to stay reading but also leaving so much to be discovered. There are so many questions to be answered, Vaughan….so many questions….

And the grand writing is paired with a fantastic artistic talent in Fiona Staples. Staples’ art has the same raw feeling to it as Vaughan’s script and the images are both crisp and frantic at the same time. Staples is building a world here, and it is very easy on the eyes. There are fantastic fantasy elements to her art and some great sci-fi stylings throughout the issue that make it a truly unique experience. The art is no ripoff of any other sci-fi epic – this is all new territory that is visually astounding.

Saga #1 is yet another example from Image Comics of what the world of creator owned can be. This tale could not be told in any other medium in the same way and you will be doing yourself a favour if you give this one a shot.