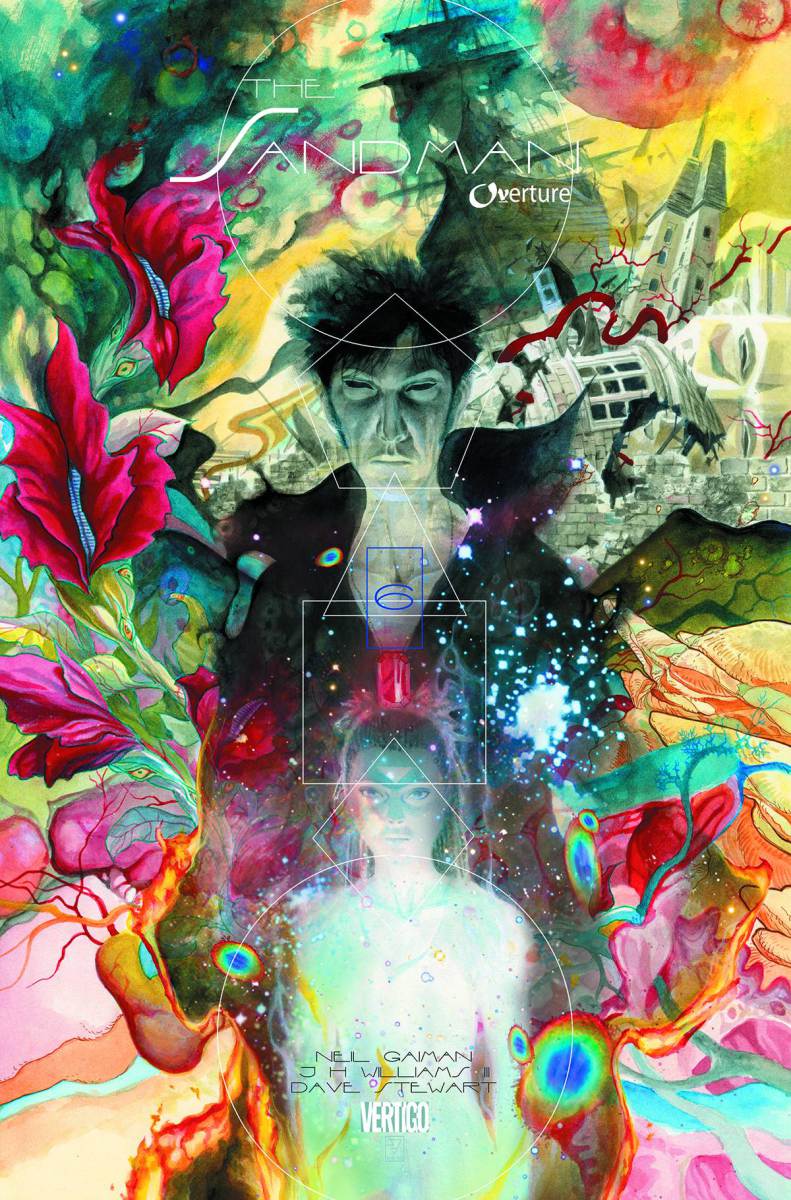 The overture reaches its end and Morpheus is left with a challenge — one that will result in his capture and imprisonment by human forces. This is the beginning of The Sandman. But there’s one last surprise left…

It’s always a risk to go back to the well, especially if the water you drew long ago — by nearly all accounts — was the legendarily sweet. This year, we saw Marv Wolfman return to the New Teen Titans in an all-too-brief two issue Convergence mini-series. We saw Keith Giffen and J.M. DeMatteis (literally) resurrect the JLI in Justice League 3000. And we’ll be watching as Frank Miller soon returns to the Dark Knight as well. How each of these moments are received by fans of the original series (as well as new fans along the way) is always challenging to gauge, but one thing is nearly universally true about the return to nostalgic love. It is never as fulfilling as you wish it could be.

Sandman: Overture is complete, and far from unfulfilled, I stand here ready to make a bold statement. This comic not only lives up to the original premise and experience of the beloved series. It exceeds it. By far.

Yes, the work put in by original writer Neil Gaiman, and artists J.H. Williams III and Dave Stewart is so breathtaking in its lush quality that I wonder what my impending re-read of the 80-issue series (because, yeah, I have to now) will feel like. Will it be as rich and packed with such luminous detail? Will it feel as deep without treading on obtuse literary pathologies? Will it be this lush?

Because Sandman: Overture, and in particular issue #6, is a lush experience of great magnitude, without ignoring the careful psychology Morpheus exhibits throughout his lifetime. To be clear, Gaiman’s man in black is not a hero, and he never has been, often being relegated to background in his own title. He is selfish without appearing so in obvious ways. Deeply wounded without appearing to care. So wrong without ever admitting so. And that is part of what makes the dreams that swirl around him and remain attentive at his fingertips so bright and charming by contrast.

There is a light that dances around Morpheus that Williams has captured so masterfully that it’s a wonder I never caught on to the series’ great reveal at its end. Could it have been any clearer all along? I’d kick myself, but I got so much delight out of it. He and Gaiman have taken one of the least sympathetic characters in the mythos, and made her stunningly heartfelt, and that alone elevates this story, this chapter, beyond my wildest expectations.

And meanwhile, the issue starts with panels radiating out of Death herself. It should be somber. It should be frightening. It’s exhilarating to count all the references to characters I’ve known in other contexts, in other universes… in my (and your) dreams. Every page is an engagement with time and beauty and an extrapolation of dreams in physical form that you can’t help but marvel over for moments on end. Williams has created the ultimate dream trap you never want to wake up from, and it exhibits itself, like a true dream, differently on every single spread.

Overall, this series has answered the unanswered questions. It has even answered questions I never knew I had, but are now retroactively burned into my young brain like a bullet through time. But it also does one other thing. It infuses shades of meaning to work that was done over twenty years ago that wasn’t there before this moment. Meaning that’s now waiting for me anew when I return to the original series.

THAT is something else indeed.

So, I wonder, as I close Sandman: Overture #6 and open Sandman #1 anew: will I feel differently when I reach this moment again? Will there be even waiting for me when I return? It’s possible. It’s definitely possible. Because Gaiman has added to the world he created with such fervor and warmth that I think this series makes the original much more of an infinite loop than it could have been without. Sandman #80 was once an ending. Now it’s simply the place we pause before starting all over again. And thank the Endless for that.