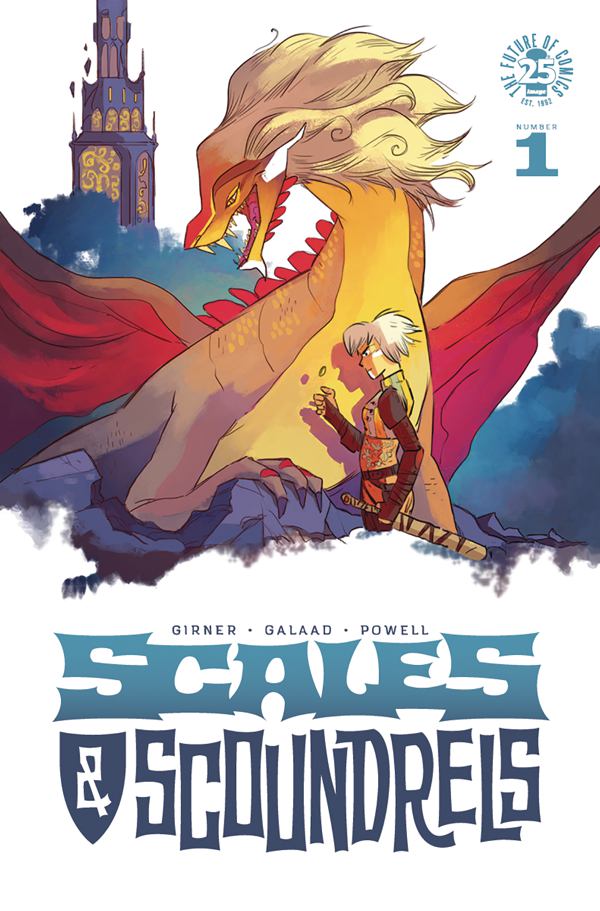 In a world of magics and wonders, Luvander is a scoundrel, only looking for her next big score. But is Luvander only a greedy woman searching for her fortune, or is there more to her than meets the eye? Find out in this exciting first issue of Scales & Scoundrels!

Girner has created a compelling and intriguing first issue. I love the western-influenced “You cheated!” saloon scene at the cavern in the beginning with the DnD card game. It sets the mood, creating the juxtaposed atmospheres of the chaotic cities and the mostly tranquil wilderness.

While I do love Luvander and all her awesomeness, I will have to say that the adorable Prince Akisbjorne of the Scarlet Sands Empire is my favorite character so far. He definitely can’t live on his own. He’s simply precious. I’m excited to see his character growth, see if he can actually come to fight some of his own battles or be of some use.

The art is beautiful. Galaad creates this intricate yet stylistically rough creations. Each of Galaad’s characters are wonderful. Galaad takes the time to give characters unique traits, whether they are just in the background or are vital to the plot. All of them have different heights, body types, skin colors, heck, even different noses! I like that dedication. I like that Galaad takes the time to make sure not all of the characters have the same face or body build. I appreciate that work.

My favorite art by Galaad, however, is the dream sequence – this spun tale of memories meshed in phantasmagorical collaging on a two-page splash.

Tinted Pink to Orange, it tells stories in fragments. A town haunted by a dragon. A street urchin willing to steal from the dragon, but is caught red-handed. A decrepit church where a chained and locked stain glass mosaic of a woman flanked with mysterious symbols lies. The urchin with a halo around her head standing on a sun and moon symbol, her face unsure. A man looking down with no face, a skull of an animal resting on his shoulder like an accessory, dastardly eyes appearing in the dark of his cloak. A pitchforked mob with someone screaming “HELP! HELP! WATCH OUT”.

It’s a trippy yet captivating scene, alluding to the past and perhaps what is to come in later issues.

Definitely read Scales & Scoundrels. It reminds me a lot of Nimona or Fairy Tail, though, it feels like it’s less of a comedic series. If you like some good fantasy with some well-written characters, then I highly recommend this to you.