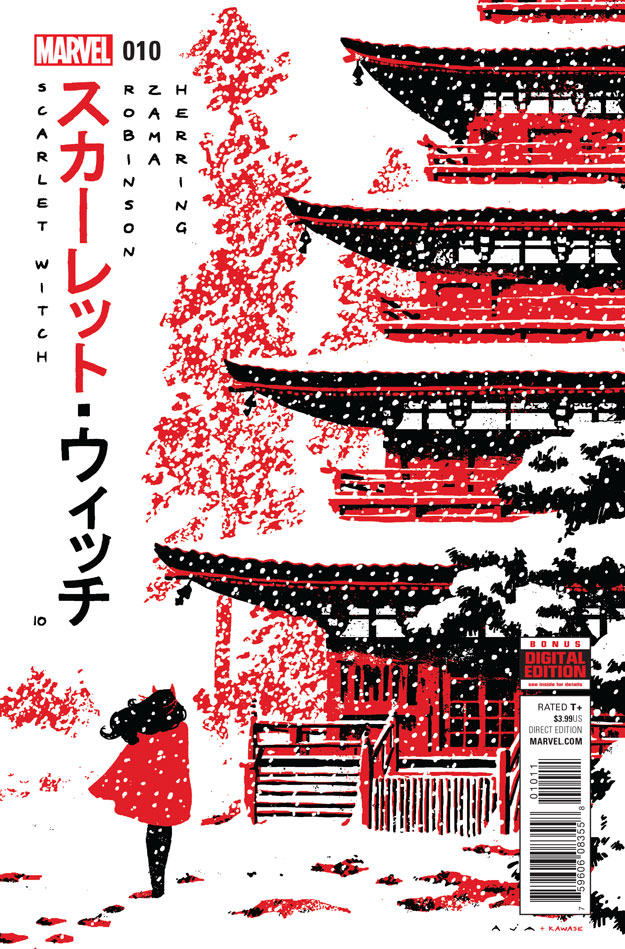 Sometimes our own story is held within the others that only see one of its chapters.

Wanda is off to solve another mystery before tackling her own, traveling to Kyoto, Japan in order to lay rest the spirit of Hiroshi Tanaka, the Aoi Master. Her efforts guide her to important people in his life, before she faces a special demon who has kept itself hidden from her, Hiroshi, and the world itself.

While the issue is great, it is one example of a series having a core thesis but moving away from that. Wanda’s previous jetsetting ventures make a bit more sense than her random trip to Japan. I love the story, but I wonder if it would have better served at a different place in the arc. The apparent synthesis of East Asian and western comics offers a dual effect within the story. On one hand, it almost felt forced at times, while on the other hand the combination of these styles presented a new way to tell a story where the main draw was nuance in dialogue and in character detail.

James Robinson’s strength in this story is in dialogue. The text heavy scenes are dense, packed full of complicated emotions. These scenes highlight the guest characters and their importance to the story compared to Wanda as its protagonist, emphasizing their importance in solving the mystery of the Aoi Master’s death. Robinson continues a tradition within the series of further exploring the magical world of Marvel from different corners of the globe, enhancing Wanda’s ties to the mystical arts within the universe. My issue with Scarlet Witch #10 is that the glimpse into Japanese culture felt less genuine than in previous issues. This attempt to imbue cultural relevance almost seemed hamfisted, and I feel that the best ways Japanese culture emerges is in other places besides the text. This is the double-edged sword of cultural research, as sometimes it comes across as forced, though I appreciate that Robinson tried, even as I understand that, as someone who is not Japanese, I am likely missing important aspects of this narrative.

As always, I’m a fan of Scarlet Witch’s rotation of artists, and Kei Zama’s art is further evidence of the impact of such a decision. The manga-influences are in characters’ faces, their eyes, and the drama of how they are oriented in each panel. Zama’s work is where I feel the cultural elements of Japan emerge, as it reminds me of the important distinctions that differentiate manga and Japanese art from western visual work. Ian Herring’s colors evoke a somber and dismal Kyoto as snow falls surrounded by shades of blue, the landscape nearly void of life, and characters’ homes feel illuminated by the dank orange and brown hues reflecting loss and regret. Despite the narrow range of colors, Herring brings forth striking comparisons between Wanda, the fox, and everything else around them, even in Wanda’s visually warm fight with the oni.

While not the strongest entry, Scarlet Witch #10 is definitely not bad. Zama’s presence is felt through similar culturally artistic nuances seen in previous issues, infusing a Japanese artistic vibe within the context of an American comic, with the addition of Herring’s mysterious color work. This issue conjures odd and nearly wordless feelings within me between the story, the characters, and the art, and I value these things because they give me an opportunity to digest a comic in ways beyond what is physically represented. I have my points of contention, but they pale in comparison to the experience of absorbing this issue in the many facets of its presentation.