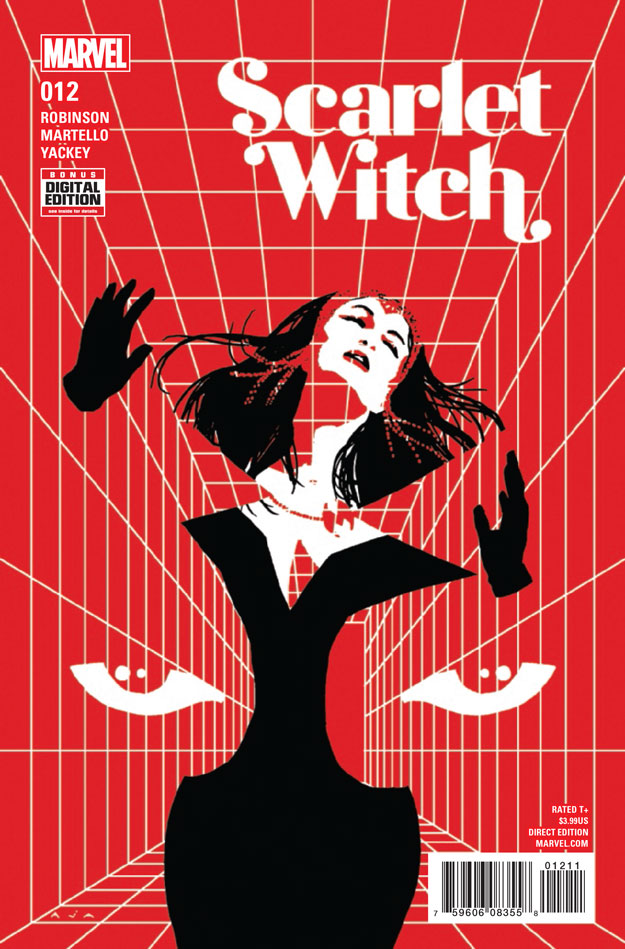 Everything leads to this.

Wanda finally gets the chance to talk with Marya, the woman who raised her, in order to uncover information about Natalya. As she gets closer to understanding the former Scarlet Witch, she has to wrestle with opportunistic demons. Through this battle, she communes with two important spirits and finds out that her truth lies in her former path.

This is what I’ve been waiting for. Scarlet Witch #12 shows us exactly why staying with a series for the long haul means that its building climax reflects earlier plot points. I’m happy that the series didn’t have to rely on shock factor or problematic turns of face to tell a beautiful story, and that the writing and art have been on point throughout the entire run.

I am beyond ecstatic to see that James Robinson had a purpose for each of the stories before. In the previous issue, there are inklings, but the story is much more purposeful about discussing not only the people that Wanda meets on her global journey, but the loved ones who were close to them. Things are beginning to come full circle, and Robinson is bringing together the threads from the first issues of Scarlet Witch, culminating in a story which explores the nature of magic and Wanda’s role at curing it.

Annapaola Martello’s art is close but distinct enough from the previous issue to provide a feel which evokes similar emotions. The use of form and detail is beautifully rendered throughout the issue, though there are problems in some instances. Facial expressions did not always seem to match the scenes within which they were portrayed, which deterred from important narrative elements. Overall, though, Martello is yet another great artist for Scarlet Witch and I like the subtle departure from the previous issue. Matt Yackey portrays dark scenes with striking clarity and bright colors. I feel this goes hand in hand with the major effect of the story, which relies on the unveiling of truth in order to move Wanda forward. There is not much obscurity, and through Yackey’s skills important details feel as though they are front and center. This story’s main setting is around a campfire, and that’s wonderfully reflected in the warm hues Yackey employs throughout the issue.

Scarlet Witch has been a risky series from it conception. A solo series about a Marvel hero with a mired past and with regularly rotating art teams is a choice you’d think the House of Ideas would shy away from. Yet, this comic has continued to excel, and its twelfth issue weaves together the tapestry that started with the first threads of the inaugural issue. With surprise and intrigue, Wanda makes her way back to some of her earliest steps in an effort to learn more about her mother. Whatever comes after this will be a mystical trek through the annals of history and the halls of magic.