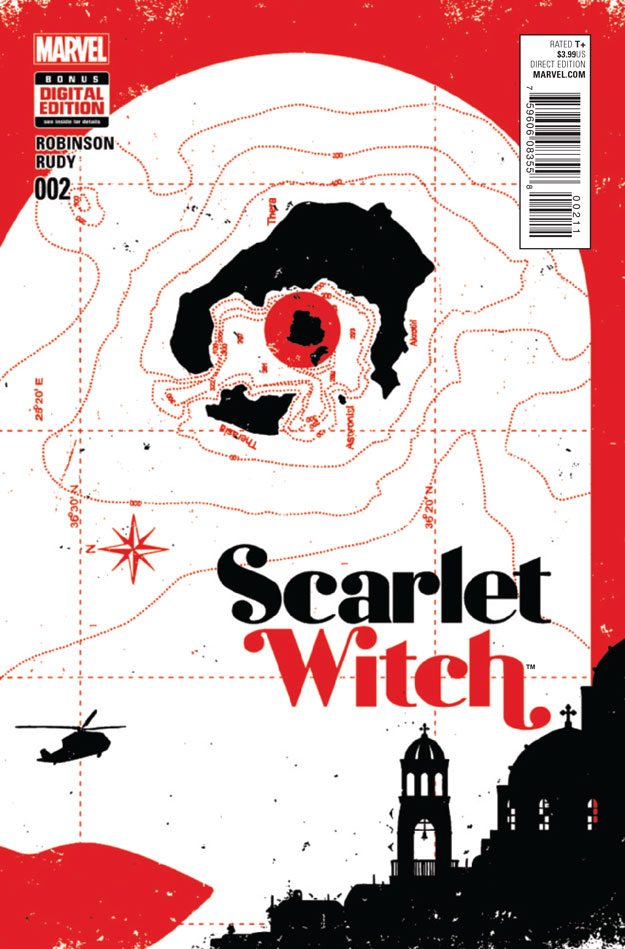 Even across oceans, the changes to Marvel’s magic are felt and manifested by powerful beings.

Wanda travels to the Greek isles to discuss matters of magic with the goddess, Hekate, who has sensed the same dangerous fluctuations in the world of magic. As Wanda comes face to face with a classic monster, she finds a way to under the spell that binds him while inching closer to the truth. In the final pages, a sinister face is revealed, pointing to the next direction in Wanda’s journey to remedy the changes to the magical world.

This issue was absolutely stellar. From the characters to the story and the art, Scarlet Witch #2 was definitely a thrilling ride. Wanda explains more about the nature of her magic, and her life in general, and we get just enough information to help illuminate the story. I love a good plot about magic and the arcane, and this issue delivers on many fronts. There are also some really great hints dropped about characters in the Marvel Universe, including one headlining his own title.

James Robinson is continually exploring a part of Wanda we rarely get. She is traversing the world, tapping into her magical connections, and coming into her own after years of chaos and dissonance. While Wanda is very much human, Robinson writes her as someone who recognizes her challenges but rises to meet them. She is more than capable and calculated, and this writer does amazing work at fleshing someone out who was at the mercy of events and global scale plotlines. Robinson is excelling at giving a larger story to a character who needed a new chance.

Holy shit the art in this issue was absolutely stunning. Marco Rudy has does extreme justice by Wanda, but helps to take our crimson caster to another realm. Scarlet Witch #2 isn’t quite a cape comic. The use of horror and darkness is absolutely stellar. Rudy plays with panels in a way that captures the order outside of Wanda but also the unorthodox shape and form of magic, especially as we come to know that it’s being corrupted. There are too many brilliant panels to name, but my favorites capture the fight between Wanda and the minotaur. The images are shadowy, nearly nondescript, capturing the ethereal feel of this series carrying from the first issue. There is such a great mix of styles, media, colors, and shapes throughout the issue that push comic art to explore novel methods of propelling a story.

Seriously. Buy this issue. If you’re a fan of art, especially that breaks away from the typical square panel and muscles world of cape comics, you’ll love this series. There’s much experimentation throughout each page, and it works well for a series that focuses on mysticism. This team was such an excellent choice for Wanda, and I am gladly keeping Scarlet Witch on my pull list after this issue.