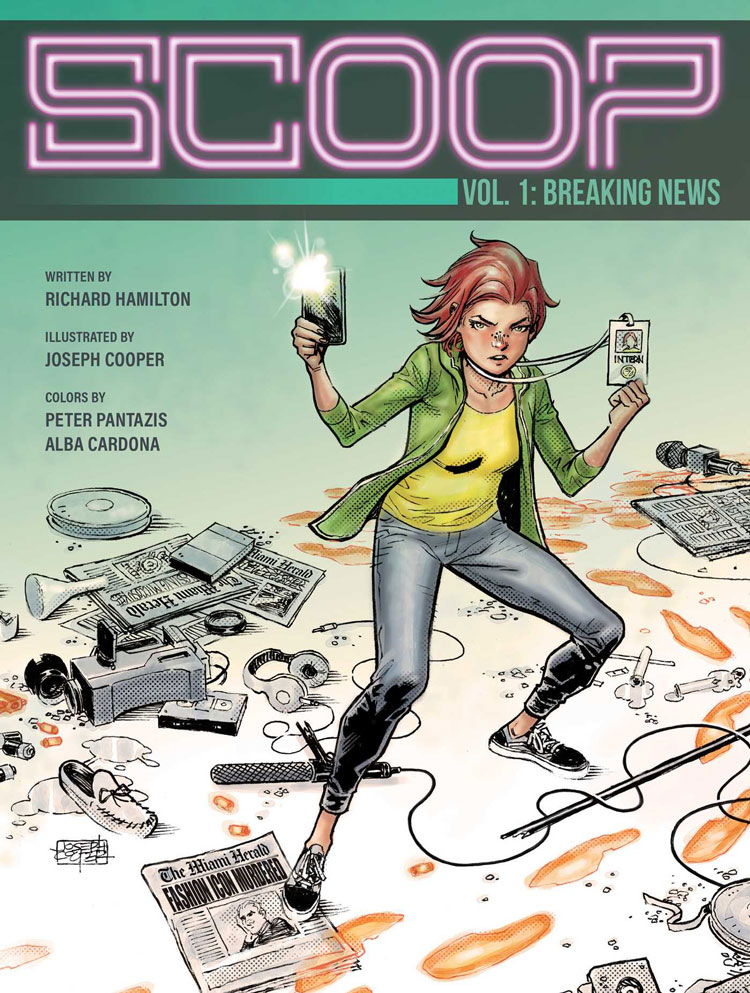 Scoop, Volume 1: Breaking News is an original graphic novel from Insight Comics written by Richard Hamilton, drawn by Joseph Cooper, and colored by the duo of Peter Pantazis. Presumably, Cooper also handles the lettering, as no one is credited as such on this book.

I wasn’t sure what to expect when I cracked the cover of Scoop, and midway through, I thought I was reading a teen drama story. That gets a bit shaken with some sci-fi curveballs. The teen drama part features Sophia Del Carmen Cooper, a plucky, red-haired, high-schooler who has had about enough of everyone else. As the story progresses, we learn more about why Sophie is the way she is – at least a little bit of that.

Compounding Sophie’s problems, Scoop Volume 1 opens with Sophie hanging from the landing strut of a helicopter and bounces back in time to bring readers up to speed on the event precipitating the perilous copter-cling. Hamilton and Cooper minimize caption boxes, preferring to have the characters live in the moments depicted in Scoop.

Sophie is likeable enough to keep the reader’s attention, and she manages to avoid being set up for clichéd comparisons. That said, she’s a bit Jimmy Olsen and a bit Nancy Drew, but only a bit. Hamilton tells the reader everything they need to know about Sophie and then some, giving the intern purpose and personality over the course of this graphic novel.

The cast, at first, is spread pretty wide, with news crew members, reporters, and random others peppered throughout the first half of this book. By the second half, however, the cast is lean, with three characters specifically being called out in the back matter of Scoop, Volume 1: Breaking News. I’m sure there’s a strong chance that some of the other characters may surface in eventual further volumes.

Cooper’s style is reminiscent of Tom Grummett, and the color palette boosts that comparison, with Pantazis and Cardona keeping things mostly bold. The art is solid throughout, but noticeably stronger in the front half of the book. By “stronger,” I mean there appears to be more detail and greater attention given to said detail. In the second portion of this graphic novel, Cooper appears to use fewer lines. Part of that is fueled by the pace of the story, which ascends throughout the book, part of it is a noticeable shift in setting and another part, I’m sure, is time of day for the story, as a shift in colors for the latter will overpower line work every time.

The story itself feels as though it underwent an overhaul at some point. The sci-fi elements appear early in the book, but become more prominent towards the end of Scoop, Volume 1. Also at that point, the explanation of the sci-fi is handled quickly and accepted even quicker. It’s all wrapped up and given a nice bow a little too quickly.

Scoop, Volume 1: Breaking News is a fun story, but jumps around a bit a little too late in the story to feel coherent. I’m probably only marginally in the target audience for this adventure, but, nonetheless, it held my attention with some unexpected twists and solid art. I’m interested to see where Hamilton and Cooper take Scoop from here. The lead character has some potential, and the world she lives in has even more possibility.