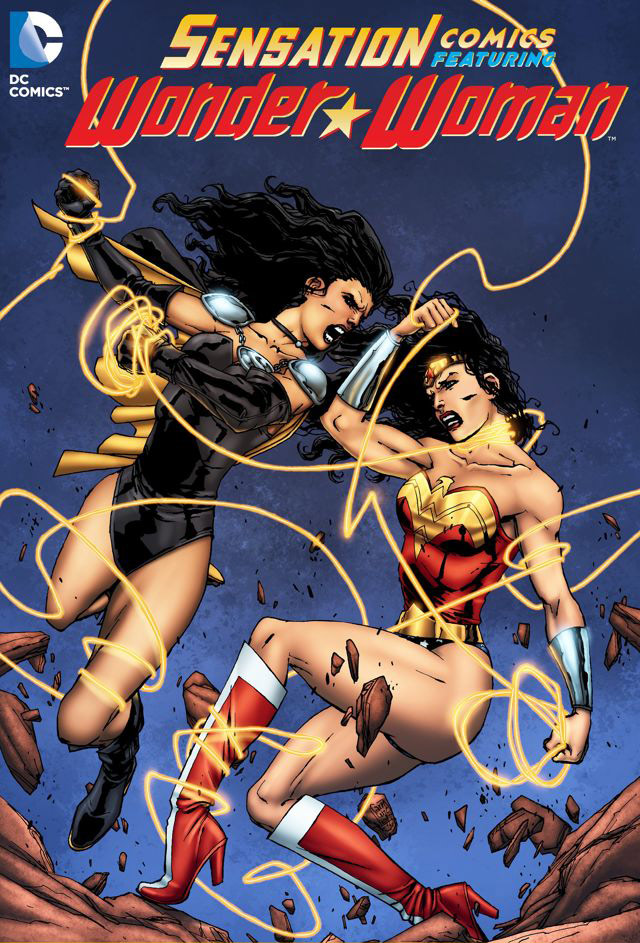 What starts out as a friendly run on the beach becomes a meta-human brawl as Wonder Woman battles Superwoman for all-out supremacy. Which Amazon will best the other, and will Diana’s three fans survive the experience?

This is a weird one for me, I gotta say. Sensation Comics has been, almost across the board, a superior Wonder Woman comic since its inception. What it has lacked in continuity and consistency, it has gained in moments of absolute delight and deep understanding of what it means to be the Amazon Princess.

Issue #13, featuring three chapters of the digital series that form a complete story, caught my eye immediately as an issue that might fall into the pack with my favorites so far. Written by Barbara Kesel (who, incidentally, wrote one of my favorite Batgirl stories ever), the book already had a leg up for me. Opening the first pages to see Irene Koh’s somewhat funky, but endearing illustrations buoyed my spirits immensely.

But once I got into the story, there seemed to be some very strange choices, both on the story level and in its construction. I’m honestly left a little baffled by it, and I’ll have to ask for forgiveness as I unpack it all while you wait.

I should be clear that no instance of the artwork in this comic is inferior in any way. Yes, I adore Irene Koh’s simplified linework and rounder figure on the two Amazons. Emma Vieceli’s character work has a few awkward perspective moments, but overall delivers a clean, beautiful representation of all the women in the tale. And Laura Braga’s action scenes are simply stunning. The battle is energetic and every character has the perfect physical reactions to what’s happening on panel.

The problem is, none of these artists look good together. They draw out the (perceived) flaws in each other’s work rather than reinforce each other’s strengths. The combination doesn’t make any sense, and it feels like the story is getting progressively more like a standard comic book fight, and away from these warm moments of connection between the women, and even between Diana and Lois themselves.

But that’s also because, for the most part, they are. Kesel’s story starts off being very much about how you as an individual can be your very best. And it ends with a standard super-hero fight, that honestly didn’t make a ton of sense.

I go back and forth on the message Wonder Woman has for the girls at the start of the story. I sort of get where Kesel was going with it. While it seems boastful and rude to stand in people, particularly those less endowed than you, and explain what it’s like to be THE BEST, I have to ask myself, why shouldn’t she? We don’t blink when men boost their own profiles, but frequently call out women for doing the same. We often see Wonder Woman taking a more tactful path, yes, but I don’t know. Maybe it’s time she show her example a little more literally.

So, on that token, I have to leave it up for others to debate. And it is an interesting debate. But on the whole, attitude aside, it felt like Diana’s delivery was not one familiar enough to me to feel like Kesel “got” the character. The remainder of the story takes a turn for the much clearer worse, however.

Diana claiming to not be about “war” after pummeling her enemy (not to mention, she’s the Goddess of War already in the world this story takes place in) is nonsensical. Diana starts the story by being offended by one of her fan’s implied slut-shaming, but then proceeds to mock Superwoman for sleeping with multiple men and suggests that she has a venereal disease. Even if that wasn’t hypocritical, it’s not something Diana would say to another woman. Ever.

All in all, Sensation Comics #13 is a strangely constructed tale that pieces together some beautiful artwork in strange ways, and leaves me very confused about the message that the writer’s version of the Amazon Princess is meant to impart. There’s some very good things working here, and some straight-up wrong things. But in either case, I can say with confidence that I’m not left indifferent.