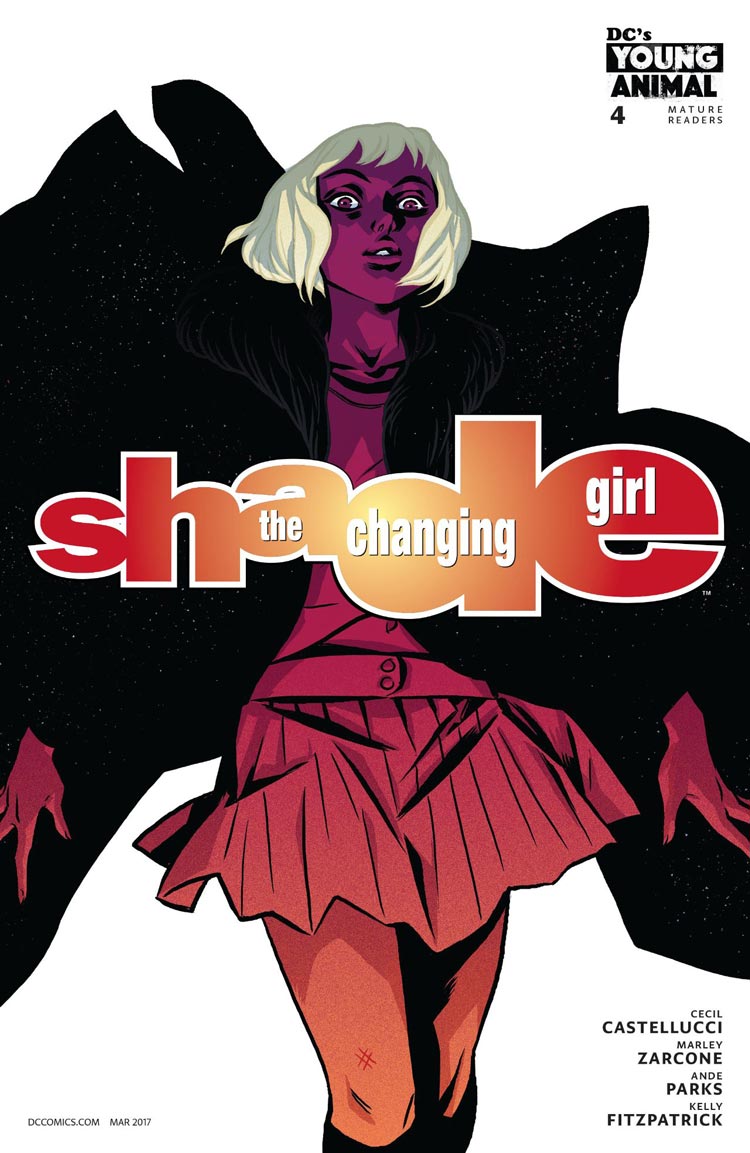 Shade grows more comfortable in her new skin, but the madness of the M-Vest continues to encroach, particularly as she recalls more of the night her host, Megan, went into the coma.

In this fourth issue of Shade, the Changing Girl, we see Shade try in earnest to make herself at home in her new body, after an abortive attempt to return home to Meta. She leans into the strange feelings and emotions of being a human and a teenaged girl and finds herself changing, feeling things for herself rather than the hand-me-down emotions forced on her by Megan’s body. She makes a concerted effort to be better than the person whose body she’s taken over, embarking on a peculiar apology tour. But just as she’s beginning to embrace her new self, a dream-state revelation promises to push things back out of balance in the next issue.

There’s a sense in which plot summary is a bit beside the point for a book like Shade. Certainly there are events that happen in order, but the book is more about poetry and emotion. The reader is guided by the arc of the character’s thoughts rather than by chronology. The story flows from one event to the next in a way that feels natural, without regard to linear time.

This issue tells the story of Shade’s journey from outright rejection of her human body to joyful acceptance. Shade learns that there is fulfillment in accepting not only who we are, but what we’ve done, and moving forward from there. It’s in this acceptance of responsibility for both her and Megan’s actions that she takes a big step toward learning what it is to be human.

Marley Zarcone’s art visually demonstrates the shift in Shade’s mental state. In the early pages, as Shade rejects her humanity and the M-Vest forces its madness upon her, the art has the abstract, non-representational style that has been the series’ hallmark heretofore. For example, early on Shade is depicted with five heads, each bearing a different one of the emotions she’s feeling all at once. As Shade comes to grips with her human self, though, the art grows less and less dreamlike. It still feels unique and stylish, though, and remains visually engaging throughout. Kelly Fitzpatrick’s colors strongly support the art, with well-chosen flat colors throughout and clashing gradients wherever the M-Vest asserts itself.

The issue ends with a second feature starring Element Girl, written by Magdalene Visaggio with art and colors by Paulina Ganucheau. In three pages, the creative team tells a deft story of a woman trying, and ultimately failing, to perfect the illusion of a dreamed-of ideal suburban life for herself. There’s a fascinating unreality to the situation from the start; Element Girl’s only audience is herself, and we know she knows the scenario is fake (she mentions how pleased she is with the verisimilitude of the eggs she generates, for example). It’s a story of her trying to convince herself that she’s convincing herself, and it all dissolves away as her inanimate family flops around and shatters her suspension of disbelief. It’s a compact and artfully told story.

Shade, the Changing Girl continues to impress with its fourth issue. The writing is poetic, the art evocative, and to top it off the second feature is fantastic.