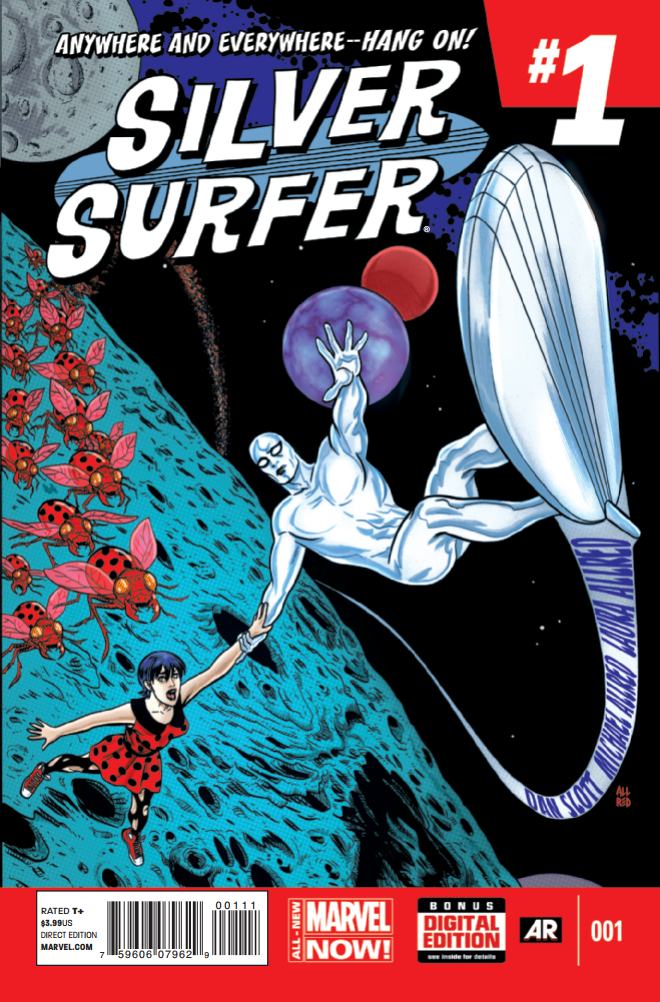 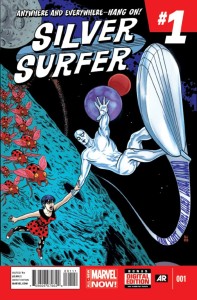 It’s taken me several days and several readings to sort out exactly where Silver Surfer falls on the spectrum of Marvel’s newest line of books. The art is flawless, the story has potential, but there are certain things that make me hesitate to say the book is perfect.

What matters most, of course, is that the book is incredibly fun to read and it’s completely unlike anything else in Marvel’s line up. It was a slow start that built to a pitch-perfect finish on the final page; it’s impossible to not want more. More of what, though, is the big question.

Visually, this is all a comic book should be. Mike & Laura Allred’s work is like Jack Kirby in 3D high def. There are panels that literally look like you could reach in and join the action. The Silver Surfer, as a character, lends himself to fantastical environments only limited by the imaginations of the writer and artist. This book is the product of people who did not let a single thing stand in their way.

I have never seen anything so colorful and bold and stunning – the art almost renders all of the dialogue irrelevant. It’s a rare comic that I can enjoy while divorcing the words from the pictures; if either falters, so does my experience. This whole title could be silent and I would still throw down money for it every month. Given the bar set by this first issue, I can only hope it gets bigger and weirder.

The fantastic pop art storytelling keeps the book interesting while the narrative takes its time getting moving. The story is good, don’t get me wrong – I’m enchanted with Dawn and I am completely on board with the Doctor Who “demigod and human girl travel the spaceways to self-discovery town” premise. I just wish the pace had been a hair quicker. If I hadn’t already read the preview story featured in All New Marvel Now Point One, I don’t know that I would have been sold by this one issue.

That last page is really where Dan Slott sticks the landing. I couldn’t contain my grin, and I was ready to pick up the next issue and GO. In that sense, the book obviously does its job. I just really wish I’d had 4 or 5 more pages to work with after that moment. The book also does a good job establishing the basics of who the Silver Surfer is and was – I know next to nothing about him other than ex-Herald of Galactus – dropping ample references to his continuity and emotional baggage.

I am left with some anxiety though, hopefully anxiety that will be resolved in issue #2 (which I am totally going to read and so should you). Slott has stated that this is a Doctor Who type of story, which is great because you can do so much with a guy like the Surfer who can basically go wherever he wants and throw down with the power cosmic on a whim. I love the idea of this ordinary homebody of a girl – which hit a little close to home, I’ll admit it – visiting SPACE before she even visits London.

I’m just worried that Dawn will end up being either a perpetual damsel in distress, or that she’ll fall into the trope of the Mysterious Girl who exists as a puzzle for the Surfer to figure out. Ideally she will have her own motivations and choices that are not solely in service to the Surfer or in support of furthering his character development. Basically, I don’t want Dawn to be a prop. There’s a difference between a character who exists AND falls in love with the lead, and a character who exists TO fall in love with the male lead. Assuming they fall in love at all. There is an implication of a stronger connection that makes me jump to that conclusion, but it’s not a certain thing yet. Hence I’m sticking around. And again, the gorgeous, amazing, holy crap did you see that splash page art.

This book has the potential to go places that other books can’t; the universe is big and as strange as the creative team wants to make it. It can be the Marvel book that totally ignores reality and focuses on possibility. I hope it is. I want that. I am on board for what Slott & Allred have to show me. It’s definitely a risk worth taking.

A preview of this comic can be found on Comicosity!