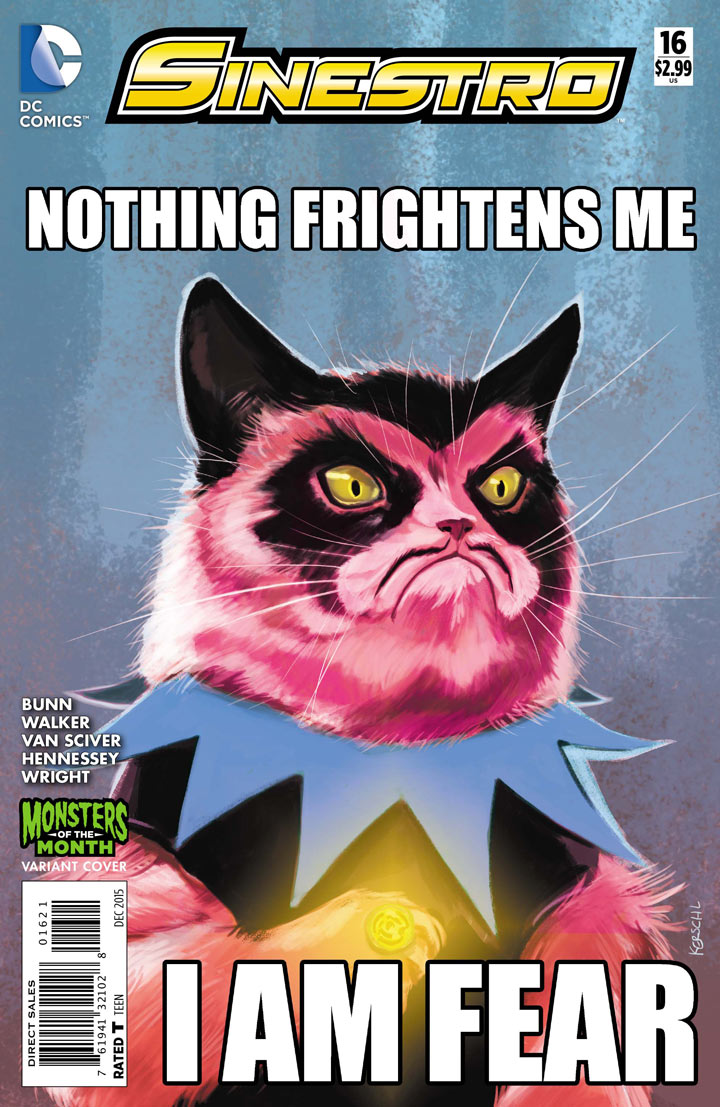 Let me just say this upfront: No one draws Sinestro like Ethan Van Sciver. No one.

As chief illustrator for 75% of Sinestro #16, Van Sciver takes me right back to some of my favorite Lantern stories in a matter of moments, giving us a Sinestro who looks as alien as he actually is. This is no standard humanoid, just with scarlet skin. With exaggerated facial structure, mega-arched eyebrows, and the beadiest of darkened eyes, the Yellow Lantern is so distinctive under Van Sciver’s pen — and thoroughly lives up to the fear he’s meant to inspire. It’s like seeing a cross between Hitler and a grey alien, mashed up in super-villain form, and it’s pretty damn perfect.

And that perfection carries through every single one of Van Sciver’s pages, overflowing into his representation of Black Adam, the other Sinestro Corps members, and mummified zombies. It’s a gaggle of threats, each more foreboding than the last, but each embedding something so elemental about their nature along the way. Particularly Black Adam, who is this dark mirror (but a mirror nonetheless) to the quintessential super-hero. His physicality and posture are precisely modeled to fit his key duality: he is a super-hero to his own people, but a villain to the world. And isn’t that Sinestro’s calling as well?

Brad Walker’s pencils and Drew Hennessey’s inks on the first five pages of issue #16 are nothing to shake a stick at, of course. They work out an introduction of each character like a royal entrance — precisely because they are — lending every figure a weighty presence that sets them apart from the watching crowd. Facial expressions are strong, but perspective on the scene just isn’t as grounded as Van Sciver’s, with angles of walk and flight that just feel a little offkilter. Environment overall takes a huge leap forward once Van Sciver’s pen hits paper, and characters, even in the air, feel much more stable.

But the issue’s glory isn’t just in artistic expression, no matter how profound. Cullen Bunn captures the Black Adam-Sinestro relationship, founded in the pages of Forever Evil, like it was always forever there. It is the buddy book we all never knew we wanted, which now I will demand until the end of time. Black Adam’s royal demeanor is still punctuated by ease and humor, and Bunn even gives me the sense that Sinestro lightens around his newfound colleague as well. They complement each other’s best attributes, discarding a certain amount of selfishness for nobility and mutual respect. And that’s something I believe we rarely get from either character when paired with a straight super-hero counterpart.

The mystery set up in this issue is easily understood for any reader ready to jump in, for this story alone, or to continue forward or backward with the series. As someone who unfortunately hasn’t been keeping up with the current threat, I didn’t find it difficult at all to grasp with the momentum of this issue. That’s a strong testament to Bunn’s pacing and laser focus on the character dynamic. And not just between the two regents. Lyssa Drakk’s role as Sinestro’s aide-de-camp, while not a large factor, is given just the right amount of detail to get me pondering, and ready to resurrect some Sinestro War issues to revisit its origin.

It’s clear that Bunn and Van Sciver in particular have Sinestro in their blood, and can channel his complicated bravado in a way that few creators can. Getting this gift of Black Adam — and what the two characters become when brought together — is genuinely something to savor. More of this in months to come, please. And heck, why not another series? Grave and the Gold, anyone?