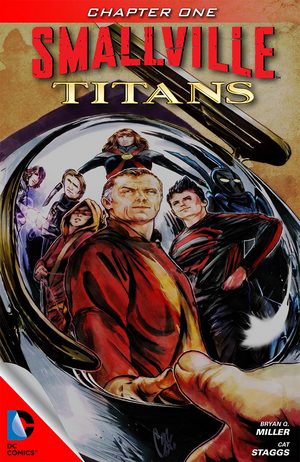 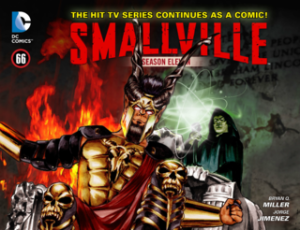 Two tones that were introduced in the previous two issues of Olympus were mythological and magical, which continues to expand as we only have three issues left of the Wonder Woman introduction.

Whenever you are getting closer to the end of a Smallville main story, the pacing has sometimes varied a lot depending on what events that are taking place: issue 66 has the right pacing that “Olympus” needs right now as we see the main characters getting down to business with the antagonists who are now starting to shake things up for our heroes.

Jimenez continues the great work that he has done throughout the whole story by keeping up with the huge steps that “Olympus” is now taking. Not only is he drawing the environment darker, he is also making everything feel bigger and that fits with the mythological as well as magical tones that I have talked about.

Because the pacing is getting faster, it makes sense to see that wherever we see our characters; their world is shaking, both literally and figuratively speaking. Another strong aspect of Jimenez’s art is his way of drawing scenes set during the evening or night and have this glow to it that makes it beautiful to look at when you are going through the panels.

Previously, I had commented that the first piece of dialogue that we got from our main antagonist was a bit cheesy but that has been quickly solved through issue 66 and I give his first dialogue a pass.

Since this is my first interaction with the DC Comics version of Hades, I have nothing to compare with but Miller’s way of writing him – along with Jimenez’s way of drawing him – is intriguing. While on the subject of dialogue; it can’t be stressed enough how much I enjoy Miller’s way of writing Diana and she has throughout the whole story been the character that I have enjoyed the most (aside from Superman obviously).

It’s a strong but still very human portrayal of the Amazon Princess that we have seen before and that’s how we want to see this character done.

The favorite panel that issue 66 has been a panel that I have personally waited for a long time and it’s the final page of the issue where we see Diana truly becomes Wonder Woman. Without going into details; all that should be said is that Miller and Jimenez’s design is extraordinary and something that fits into the world of Smallville.

Overall, “Olympus” has been so far one of Miller’s strongest stories as he is making each chapter strong, one after another and it will be interesting to see what these final three issues have in store for us. 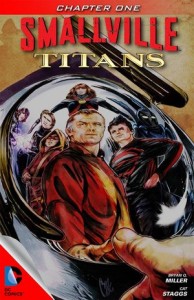 To begin with, it’s always a pleasure whenever Staggs gets to do artwork for the whole parallel story and not just the digital cover. This cover feels in certain ways iconic to things that I have previously seen in other versions of Teen Titans but mostly because it conveys the feeling of a new generation of superheroes being guided by older generations.

Traditionally, images that features reflection from a mirror or something similar isn’t something that I always enjoys but here I do because it works and strengthens that feeling – along with the coloring – that I was talking about.

Something that a lot of fans of the television show have been hoping to see in the digital series for a certain time has been the return of some DC characters that were introduced throughout the course of the TV show but some of them were never seen again (due to actor availability or story choices).

“Titans” is an entertaining storyline and definitely easy to get into because it takes the opportunity to expand the huge DC Universe that Smallville established during its run. We also get the opportunity to see how Miller write these characters since he never got to while the show was still on the air (for the records: whenever he did get to write for new DC characters, it was some of the strongest Smallville episodes).

What I have always loved with Staggs as an artist since her first cover (“Guardian”) is her ability to draw the characters – as well as their costumes – and make them look like the actors that we saw on TV; I enjoy seeing how real the costumes look like, especially the costumes.

Looking at how she draws the characters, the structure as well as the environment, she is doing the same thing as she does with the covers by making it look real; what I mean with that is, the way she uses the shadowing and the coloring makes it different from the other artists that have been drawing for Smallville.

It’s difficult to compare with previous writing of these characters (especially those who only appeared once) on the show to the way that they are interpreted here because most of them only appeared on the show once, meaning that the TV writers never got a chance again to continue writing for them.

But judging from this first issue, I prefer Miller’s style more since we as readers has now followed his strong treatment of Smallville as a comic book for over a year. I have to see more dialogue though before I can get a clearer opinion; so far it’s good and each character has its own way of expressing themselves but still, we need to see more.

The fun aspect of this particular issue and the story it contains is that if the show had been able to incorporate this at some point during its run, this type of story could have made a great backdoor pilot. This is also what makes Miller such a strong writer; he carries the ability of TV writing as well as comic writing and makes it into one combined feeling that makes this comic book so enjoyable.

Overall, “Titans” is off to a great start as this is a parallel story that I want to see more of because of its tone and its casts of characters that we can now explore more.