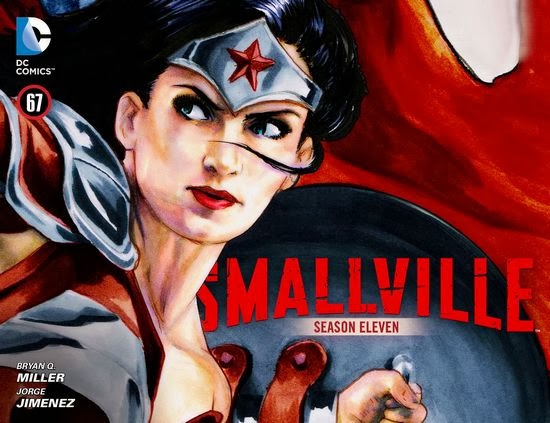 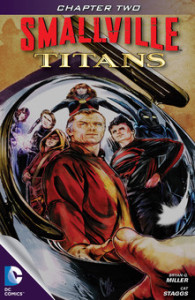 What this issue succeeded with was managing to really convey that this is the story about teen/young superheroes. With the first issue, I wasn’t able to give a full opinion on whether or not I was enjoying the way that Miller wrote the dialogues for these characters, but this week, since it was more of an exploration of each individual hero rather than an action-packed one, I could finally get a grasp on the way he writes them. While they do feel slightly different from the way that we saw them on the TV show, they feel much more unique with their own style.

We have the combination of sassy, sophisticated (although, it’s only one of them who talks like that) and realistic dialogues. Despite the fact that readers don’t get to spend a lot of time with several of these characters; the tone that this issue had was sort of a coming of age story. While it’s still a long way to go, Miller is showing growth in these characters and that is something that I appreciate.

Staggs is continuing the great artwork for this story and in this issue, taking place during the night which gave some beautiful panels. I can’t stress enough that the biggest strength in Staggs’s artwork is her ability to make everything almost look real.

It may be the shadowing, coloring or just how she draws the structure of the characters, but whatever it’s that she is doing; that is what I’m enjoying a lot with Titans. She is, so far, the only artist that has pulled it off and this is by no mean a slam on some of the amazing artists that Smallville has had since the start. Favorite panel of issue 2: the second panel on page 18 and if you are a big fan of Young Justice as well, then you will love it.

I’m was a big fan of the Young Justice animated series – that ended too early, sadly – and seeing what Miller is already doing with the characters of Superboy and Miss Martian; I got very nostalgic when I was reading the second chapter.

Something that Smallville didn’t have a lot of was a relationship between two young superheroes so it’s exciting to see that concept finally being brought to the digital series. Miller treats it well as you feel for this relationship and get invested in it.

As much as I enjoyed the issue, it’s also one of the reasons why it’s a bit disappointing that the parallel stories only have four chapters. There is so much that can and needs to be explored with several of these characters because there is always a chance that after it concludes, we may not see them pop up for a while.

While there is exposition for the readers, it just doesn’t feel enough because there are still so many questions that will probably be left unanswered by the end of Titans. But given Miller’s previous work on this series, I know that he won’t disappoint when it come to that issue.

Titans is overall going strong as we got a huge and unexpected cliffhanger that will be interesting to see how that gets resolved. 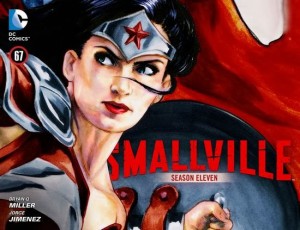 I know that I say this every time we get a new digital cover by Staggs but amazing work deserves the praise so this time is no exception. This final cover for this particular story, featuring Superman and Woman Woman – both in their superhero uniforms – battling against the threats in “Olympus”, is the winner out the ones that we have seen throughout the past couple of weeks.

Something that always makes a specific story-arc strong for any comic book series is when the writer (as well as the artist) can keep the tones that they have established consisted. The tones that we have explored with this story are mythological and magical which haven’t disappeared at all throughout this run.

Miller brought a certain element to this issue that in a way pays homage to one of the big events in the series finale of Smallville; an event that featured the rise of a true hero and that is happening again now as another hero is finally rising.

For some odd reason, I found the panels with Superman and Hades more amusing rather than thrilling and it had to do a lot with the dialogues. That’s something that felt a bit new for me as a reader who saw Clark Kent do saves for ten years on TV and it was rare to find a moment when any of his battles were amusing.

It’s not bad writing by Miller by any means but it’s definitely a new thing for Smallville’s Superman and for now, I’m fine with it. As we are seeing the mentioned tones getting bigger, we are getting to see more of Jimenez’s style of drawing mystic creatures.

It helps a lot that it is still taking place during the night because the way that the colors were used and the structures were made here: it definitely needed to be set during the night. My favorite panel of this issue is on page 12 which should be appreciated by Wonder Woman fans. Another aspect that has been kept consisted is whenever the pacing is changing, so is the environment and Jimenez is definitely keeping up with that.

The only issue that I had with this chapter was that it barely had Diana in it which in all honesty isn’t something that should happen when you are this close to wrapping up the story. This was also something that happened during “Detective” which didn’t bother me as much as it did here. Hopefully these final issues will feature more of Diana because after all, this is her introduction to the Smallville universe.

One thing that was a letdown was the cliffhanger and without spoiling it; it felt a bit predictable. It didn’t decrease the quality of issue #67 but it still had a bothering effect because so far, the way that Olympus has been written so far has featured a lot of twists.

We got two issues remaining of this exciting story-arc; it has definitely received a deserving spot on my top 3 for best story-arcs in Smallville Season 11. It’s going to be fascinating to see what these final chapters will have in store for us.