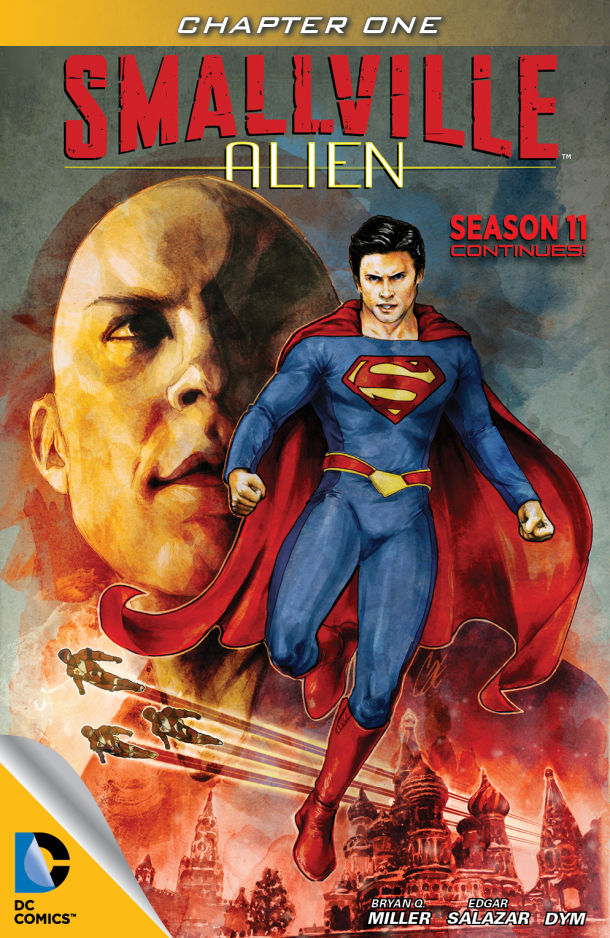 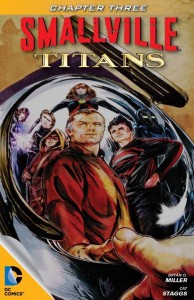 Titans has so far been one of the stronger parallel stories in the Smallville digital series because through this particular story, the readers get to experience more of the universe that Smallville has established. There is a lot of exposition that references other characters that haven’t been seen in a while or even since the TV series.

A theme that Titans has featured in each chapter has been “the unexpected”, as basically all the issues has ended with a bigger cliffhanger, issue after issue. It has been difficult to predict what will happen in the next chapter because Miller writes the story in a way that everyone is danger and there is no way of telling what he will do in the next one. That is actually something that hasn’t been featured as much in the writing for the main stories. Obviously, there have been several cliffhangers in a certain amount of issues in each episode, but never has it been cliffhangers that have followed each other.

There wasn’t really anything different with the way that the dialogues were written in issue 3, but it’s good to see that once again, Miller is giving everyone their own style. Some characters had more dialogues than others, especially the villain whose motives were explained and it made the character easier to understand. It was definitely a good choice by Miller to pick that particular character as the enemy for the younger heroes.

Because there are several characters with superpowers in the story, Cat Staggs gets to feature a lot of different colors and structures, and her style changes based on which character it is. That is one of the advantages of having several superheroes in one and the same story. Each panel that features a character using their powers has had its own tone of colors and even the setting for each character has been drawn differently. Because this chapter features a battle, there are a lot of impressive panels with different action. A personal favorite is the half panel on page 16 which was drawn really well. Another great half panel can be found on page 18 that basically makes the half into six mini panels so that the readers can see exactly how the characters move.

So far there hasn’t been much to complain about: Miller is really fleshing out these younger heroes and Staggs is once again getting to do the artwork for a whole story and not just the digital covers. There is only thing which has been brought up before which is the length of these side-stories: obviously because it’s a “side-story”, it’s supposed to be shorter than the main stories are so this comment may be unnecessary if you look at it as a whole. There is just so much that needs to be explained before the last issue comes out and because of what the antagonist of this story revealed about certain characters, the fate of some of the DC characters in the Smallville universe is now a big mystery. Issue 3 was overall another great chapter that is now entering its conclusion and it will be interesting to see how Miller will wrap it up. 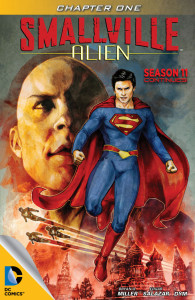 One of the elements that has been explored and discussed in the world of the comic book characters in several different incarnations has been the subject of aliens. With Superman being an alien from another planet, the comic books have always featured some focus on his background and how people look at him. Questions such as “Can he be trusted?” and “What if he decides to rule over this planet one day?” have been brought up in several incarnations of Superman whether it’s comic books, TV shows or movies. Smallville’s Superman has reached to that point now where people are asking those same of questions.

To begin with, Cat Staggs keeps knocking it out of the park with every digital cover she draws as the latest one features the Man of Steel and Lex Luthor in what feels like an iconic cover. There is a beautiful mixture of red and grey colors in the background, although it’s not certain who the flying people are. If you know who or what it is, feel free to leave an answer in the comment section.

Miller starts this issue in a very emotional way with an amazing flashback to Clark’s childhood which has been a while since fans of the show got to see something like that. Alien’s artist Edgar Salazar did an amazing work for the first issue and while on the subject of the flashback: it means a lot to see one of the show’s most beloved character being drawn to make it look exactly like the actor.

The way that Miller wrote the flashback that then lead into the present was not just one of the strongest panels (page 9) in the issue, but also one of the best presentations of Superman’s struggles. Seeing him in outer-space and listening to people, in different languages, asking about him was one of Miller’s best writing moves in the whole run, as Superman is supposed to have this universal aspect to him. Salazar definitely nailed the outer-space panels, especially the way he drew Superman’s face that shows a hero who is struggling when all he is trying to, is be someone people can trust in.

The pacing got a lot faster throughout the last couple of pages and that may be the only nitpick since it went from this peaceful and emotional start into this faster setting. The reason for feeling that was because this time it went too fast after having the calm setting that the issue started with. One of the most iconic rescues that you can have with Superman is trains and Salazar drew that whole sequence fantastically.

But it’s what follows that makes this story intriguing and that is the response that he gets from the people he saved. This is a new element to this version of Superman and it will be intriguing to see how Miller will write this story. The last panel was a mystery personally and if you know what/who that is, hit the comment sections. Whether it’s something from the DC Universe or something completely new remains to be seen, but it was definitely an interesting way to end the first issue.

Overall, Alien is off to a good start with an intriguing story, a great new artist as well as some mysteries that will most likely be explained sooner rather than later.