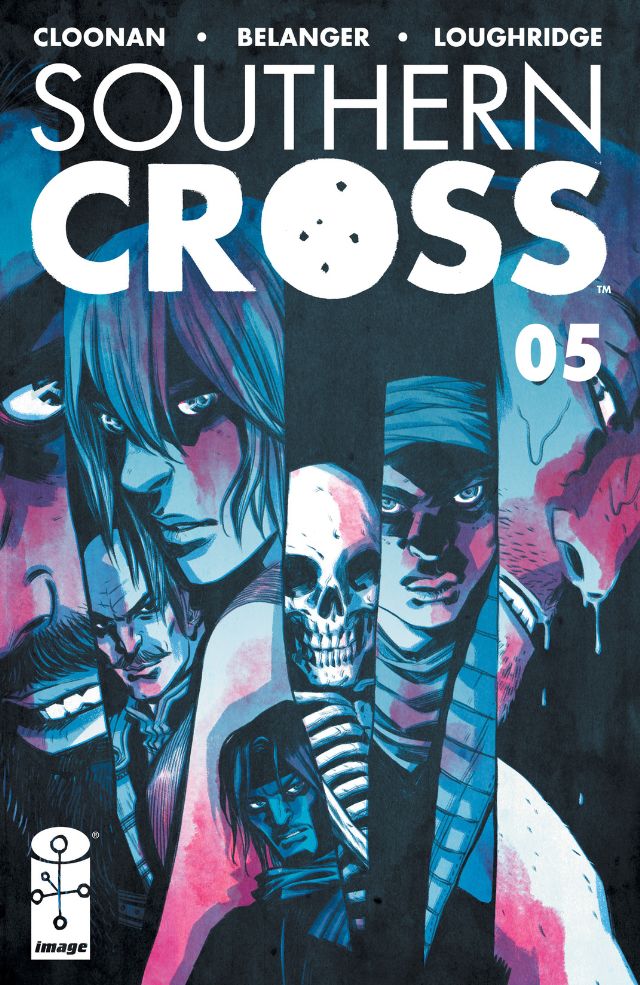 The tension that has built over the last 5 issues of Becky Cloonan’s sci-fi thriller is nearing its crescendo as the penultimate issue of Southern Cross proves to be the most anxiety inducing installment yet. Although heavy with exposition, Southern Cross #5 maintains its pace and atmosphere, and the tension that the team have worked so hard to create is evident in the clipped, aggressive tone of the dialogue and the wide eyed facial expressions of the characters.

Increasingly claustrophobic, it’s beginning to feel as though the Southern Cross becomes a little bit smaller and a little bit more alive with every passing issue. The ceilings seem lower, the walls closer, and the heartbeat stronger. It is this that really helps sell the tension that is so prevalent through the story. Andy Belanger’s artwork is incredibly effective at capturing this as he uses varying perspectives and panel shapes to emphasize how little space is to be had inside the ship. The pages that vertically track a characters journeys through corridors via flights of stairs and elevators are particularly interesting due to their structure and the way they guide the reader’s eye down the page.

By avoiding the use of colours you might experience in a setting that is flooded with natural light and instead opting for harsh, cold neons, Lee Loughridge has embraced the feeling of claustrophobia that is so evident in the art and translated it into something that is equally unsettling. The use of black gutters works in a similar way, closing off the edges and reminding you that outside of the Southern Cross there is nowhere to go. If Loughridge’s aim was to make readers feel uncomfortable, he has succeeded.

If you have yet to check out Southern Cross, issue 5 of a 6 part series may not be the best place to begin, however, should a wonderfully 80’s, sci fi, action thriller with a diverse cast and a rad female protagonist be the kind of thing that usually piques your interest – and let’s face it, why wouldn’t it be – I would highly recommend you taking a look.