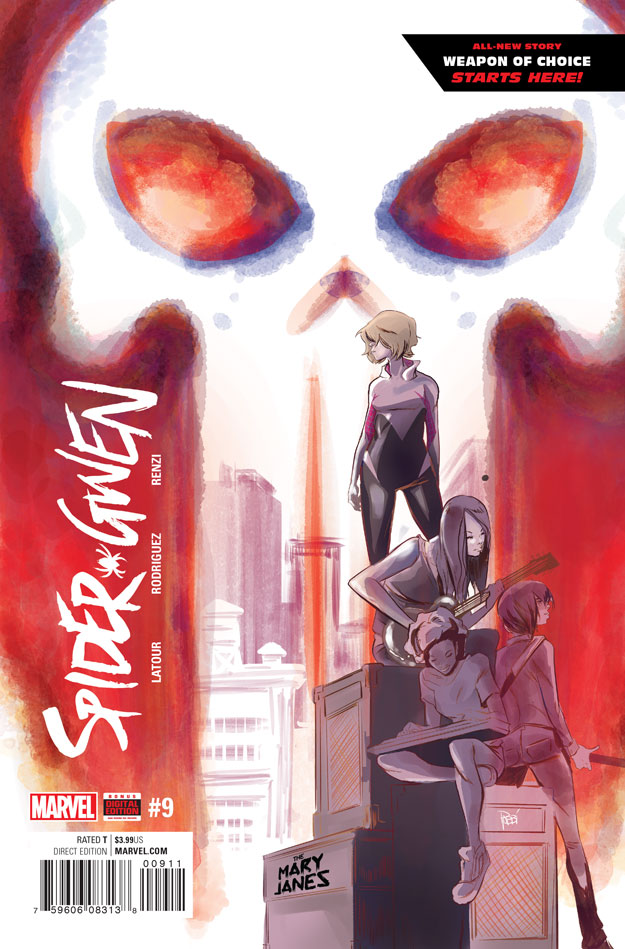 Spider-Gwen kicks off a new arc after the tumultuous events of the Spider-Women crossover. During the crossover, Gwen Stacy learned that her earth had its own Cindy Moon, but this Cindy was a villain who was capable of taking away Gwen’s powers. Now at the start of this issue, Gwen’s friend Glory is texting her, wanting her to go out to a concert, but Gwen isn’t feeling it.

She ends up going, though, and a few things happen. One is that Gwen wrestles with whether she wants to continue being Spider-Woman. Another is that Gwen and her friends move quickly through locations — a concert venue, an arcade room, a back alley, and finally a hipster hot dog joint — while meeting a few minor characters. It was in this progression from place to place that I felt like the story could have been tighter. What was the point of Maxwell’s inclusion in this issue? Why was the alley where Gwen met him necessary at all?

The scene in the arcade is only one page long, but it could have been expanded. Jason Latour injects some light humor with characters talking about matches on a Tinder-like dating app. This dialogue was good to humanize Glory and the rest of Gwen’s friends, but it felt disconnected from the subsequent conflict (both Gwen’s inner turmoil and her encounter with Frank Castle).

Despite the somewhat frenetic plotting, this issue has beautiful moments illustrated by Robbi Rodriguez and Rico Renzi. I absolutely love the first panel of the fifth page, when Gwen is sitting forlorn in her apartment, thinking about all the words she could tell Glory but can’t bear to. Renzi’s swirls of plum, purple, and inky black look as intense and raw as Gwen’s emotions.

The one artistic oddity is the layout and styling of speech bubbles. On the first page, it’s confusing whether the person pictured is speaking into a phone, or listening to his phone or computer screen, or recalling an earlier conversation. Later, when Gwen is on the crowded floor of the concert venue, it’s confusing at first before the reader realizes the speech bubbles aren’t drawn with typical arrow-like triangles pointed at the speaker, but just lines. What we see is more stylish, but potentially less clear to some readers.

Gwen Stacy’s new story arc has her in a reflective place: choosing whether she wants to continue as a superhero. Rodriguez and Renzi’s art hits you like a battering ram, with energy and rich color on every panel. Spider-Gwen is a hero who battles self-doubt as she fights to make a difference, and that’s why we love her.