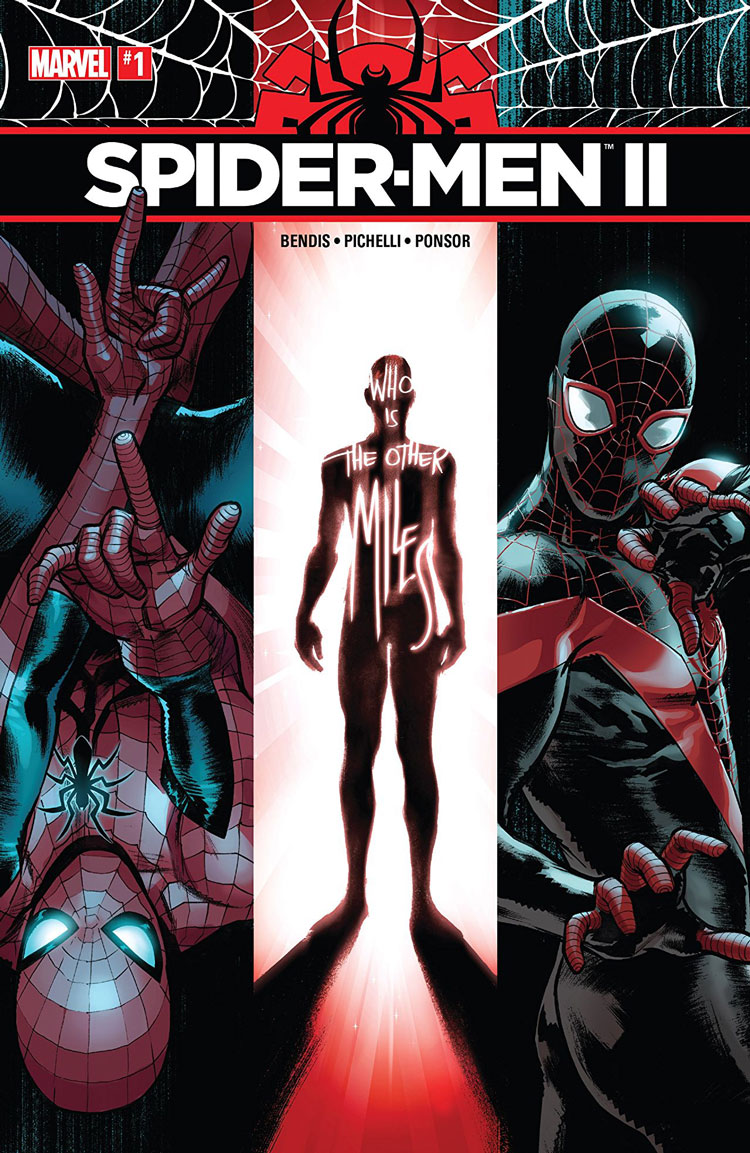 Five years ago, writer Brian Michael Bendis and artist Sara Pichelli put the wraps on Spider-Men, the first major event involving both the Marvel 616 and Marvel Ultimate Universes. They ended with a cliffhanger of the 616 Peter Parker typing “Miles Morales” into a browser and looking at the screen, saying, “Oh my God.”

In between, the Ultimate universe wound down, Secret Wars wound up, and both Spider-Men share the same universe and each sport (at least) one solo title of their own and a membership on a team book. That presents Spider-Men II with the challenge of feeling worthy of a crossover event without having the special feeling inherent in characters from parallel universes meeting to combat a shared menace.

Bendis opens with the Spider-Men in a perilous setting, showcasing their personalities and relationship, and then dials it all back to take readers through the events leading to where Spider-Men II #1 launches. To pad the tale a bit, Bendis leans on the charming inclusion of Armadillo, who seems to be growing into the spot of Bendis’ go-to garbage time/fill-in villain, to give Peter quality screen time without the risk of any of Spider-Man’s foes stealing the scene.

Otherwise, Bendis fills Spider-Men II with dialog and potential, pacing the story for a final page reveal of “our” Miles Morales, but not before squeezing in an appearance from Taskmaster. No fight, mind you, just an appearance and, yup, potential.

Pichelli does more than simply offer potential. She fills the pages with details and mood, making silent panels just as impactful as panels where Bendis challenges letterer Chris Eliopoulos to fit in a bunch of dialog without nicking any of Pichelli’s work. Pichelli displays nice creative choices with her panel layouts, bridging the comic’s spine and smartly overlapping panels to add motion, drama, and energy. With so much of Spider-Men II #1 devoted to conversations (which seem important to the melodrama of the issue), it’s critical that Pichelli provide a solid range of expressions and action from Peter, Miles, and friends.

Justin Ponsor’s colors are spot-on, from the purple energy vortex so familiar to Spider-Men readers to the tones used for the sky throughout the issue. The students at Brooklyn Visions Academy have a diverse range of skin tones and hair color to match the wide array of fashion choices Pichelli has selected for them, and the environs of said Academy are detailed through textural choices.

Spider-Men II #1 is a solid enough opening that revisits the concept of Spider-Men, addresses the current situations for the webheads, and sets up what is inevitably to come. It’s a bit airy though, indicative of a tale that is almost certainly going to be more impactful as a trade. All the same, this is a good enough start to pique my interest, even if it won’t elevate Spider-Men II #2 to the top of my reading pile the very day it comes out.