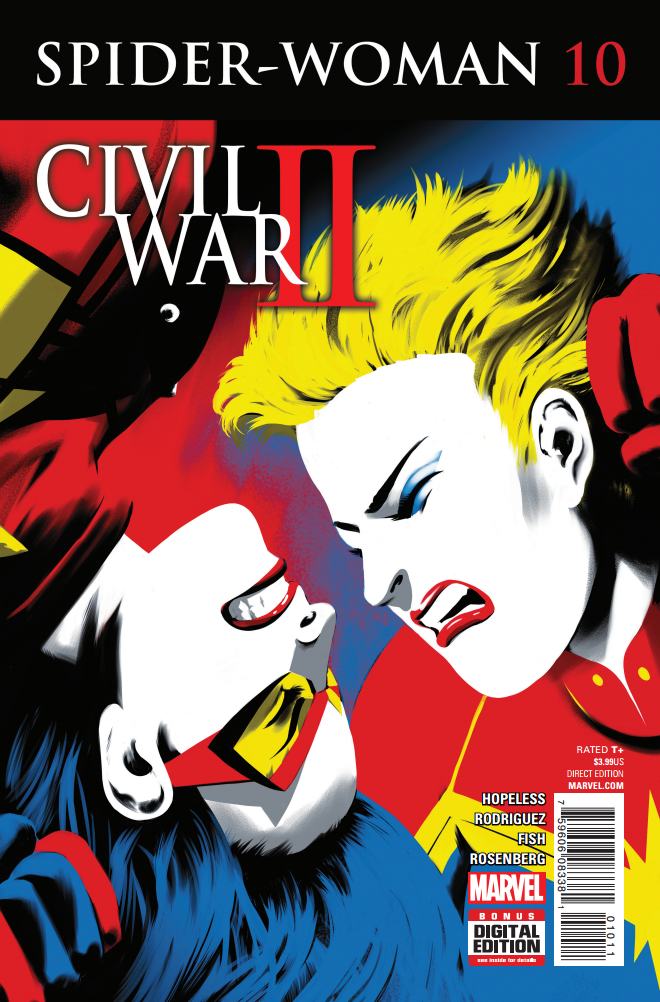 Jessica Drew has been pulled into the Civil War event that is currently dividing Marvel’s heroes. She didn’t want to take sides in this conflict, but Captain Marvel asked her to investigate the precognitive visions of Ulysses, an Inhuman at the center of the controversy. Captain Marvel wants to know how often Ulysses’ visions come true, and so far, all the ones Jessica has looked into have come to pass.

It’s fun to see Jessica do work she loves. This is a story where the emphasis isn’t on punching or fight scenes, but on Jess flexing her private investigator muscles and exploring situations that turn out to be humorous. Ben Urich, veteran journalist, accompanies Jess just like he did when Dennis Hopeless first launched this series. Ben — who wears a trench coat in the desert — and no-nonsense, motorcycle jacket-wearing Jess are concrete, perfectly defined characters.

I like this issue’s script and how it never feels crammed with extraneous dialogue. We get a peek at Jess’ loyalty to her best friend, Carol Danvers. We also get to know Jess’ personality and sense of humor really well.

Javier Rodriguez’s panels are very full, but not in an overwhelming way. There are lots of details in the backgrounds — see the taxi and awning across the street when Melter gets booted — and the entire issue feels like it puts Jess in real physical spaces. Rodriguez and Veronica Fish do a great job with characters’ outfits and sometimes otherworldly looks, like when Jess dons a space suit to meet a creature on the moon.

Rachelle Rosenberg’s colors are beautiful, with generous use of strong, vibrant solid colors on backgrounds and on costumes. Rosenberg’s gradients, such as the green behind Black Bolt, are simple and pleasing, and don’t distract from the action in the foreground. Rosenberg’s choices make all the difference, from Ben’s teal necktie to Jess’ green eyes and rosy cheeks.

The end of the issue connects the Civil War event to a major component of Jess’ life that hasn’t been brought up in any comics recently: her on-again, off-again relationship with Clint Barton. Crossover events can feel forced and overdramatic, but giving Jess more panel time with two of her closest friends — Carol and Clint — lends this event a more human, less commercial feel.

While many current superhero comics are driven by high-stakes drama and tragedy, Spider-Woman stands out for its perfect mix of humor, adventure, and realistic relationships. Spider-Woman is one of my top recommendations for new readers to pick up any issue and simply enjoy. This creative team crafts a winning story.