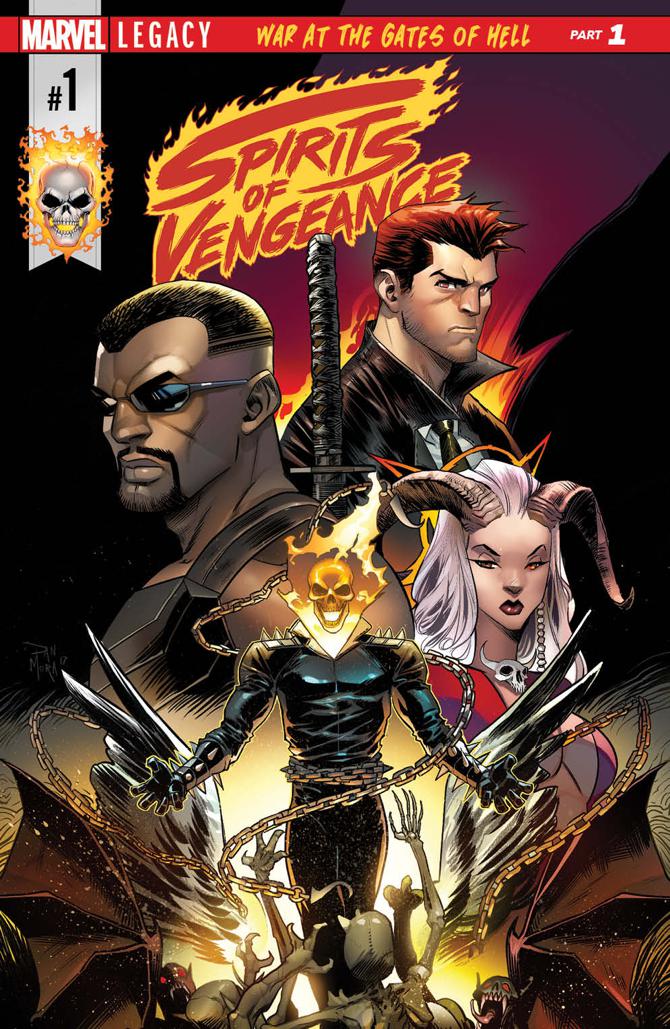 A threat is coming. The kind of threat that can only be handled with Hellfire.

Gischler, Baldeon, Mossa and Petit deliver a fun romp with this first issue, bringing together 3/4 of this hellish roster that is assembling to fight an unknown foe. I loved how Gischler doesn’t fight the campiness at all and straight up calls this what it is: a group of dark magic characters fighting to avert the destruction of the world. Sometimes calling things out for what they are is just fun, and Spirits of Vengeance is tons of fun.

Most of the issue is spent with Blaze and Hellstrom, and I like Gischler’s voice for both. Blaze appears to be down on his luck and maybe somewhat out of his element, while Hellstrom is a smooth operator. His words, and visuals from Baldeon, emanate power. He’s obviously the brains of this duo, and the worry that grows in the character about the upcoming threat gives the comic a lot of energy. Blaze feels like a man trying to escape to the shadows, and is a great contrast to the confident Hellstrom. It is obvious that some campy, fiery, horror-fun is coming and Gischler set a really great tone for the outset of this series.

The tone of the words is set ablaze by Baldeon and Mossa as the art battery literally brings the fire to this issue. Baldeon’s style suits this kind of story very well, giving these demons style and keeping the tone light even though we’re talking about the Ghost Rider and the Son of Satan. His work reminded me of Tradd Moore’s from a previous launch of Ghost Rider, and the visual aesthetic of this comic is fantastic. His pencil work is in complete sync with the tone of text and I was captured by the first panels of his work and he never let me go.

Mossa’s electric colour work impressed me throughout the issue, making the fire dynamic and powerful. When the Spirit of Vengeance unleashes it can be one of the most intense visuals in all of comics and Mossa went wild with the colour work. The action is where he shines and absolutely nailed the colour work in this first issue.

You’ve got my attention, Spirits of Vengeance. I’m a sucker for these Hellish characters and I love the tone of this first issue. It’s going to be a wild ride, but I have a feeling it’s going to be a lot of fun watching this group of kinda-sorta-maybe heroes save the world.