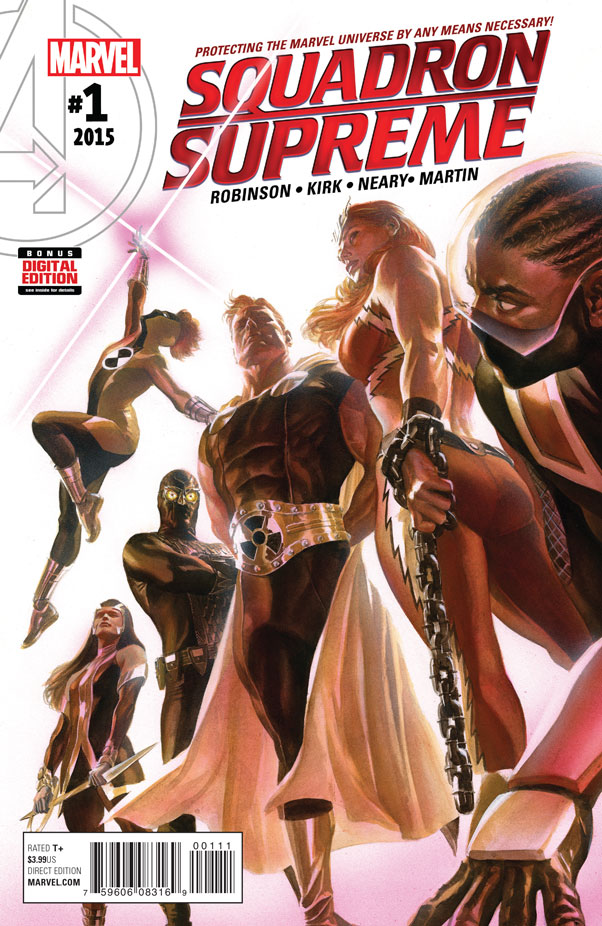 So….Robinson, Kirk and Martin are just going for it, eh? Squadron Supreme #1 hits like a hammer, and this team is going to be all kinds of dark fun.

This title has “X-Force” written all over it, as a team has come together to “deal” with threats to the world. We’re not talking small threats, we’re talking world killer threats and this is the sort of team that can deal with it. Robinson, Kirk and Martin do not hesitate to show exactly what this team is capable of, neutralizing a long time nuisance in the Marvel Universe and doing it in a hugely bombastic way. Not only was I surprised with what this team did, I was surprised that editorial let it ride, as the shockwaves coming from this story will impact the Marvel Universe for a long time to come. If this first issue is any indication, this is going to be a big, dark book with some rich characters doing the dirty deeds necessary to ensure the world exists tomorrow.

Robinson’s voices for these characters are great, as he makes it very obvious these are strong, powerful characters. We know little about them, as they have come from worlds lost to incursions, but they are a force to be reckoned with nonetheless. Much of the same spirit of Robinson’s brilliant time on Earth 2 can be found in these pages and this really feels like it is in his wheelhouse, perhaps more than any of his Marvel work I have read thus far. I both want to know more about these characters and kind of fear them, and that’s just fun. This is a very well paced first script and I have a feeling this is going to be a book of big moments.

Leonard Kirk and Frank Martin deliver on those big moments in this first issue, throwing down huge splash pages and double page spreads to show the gravity of what is occurring. They balance these huge images with rich, story filled pages nicely and overall, this is just some rock solid artwork. This team looks like a group of Avengers but Kirk ensures the dark side of this team is ever present and his Hyperion is a show stealer. There are some dark, shocking moments in this comic and Kirk handles them very nicely, doing Robinson’s script about this dark team of powerhouses justice. This is the kind of superhero artwork that is just easy on the eyes while also being dynamic and I hope this team has a good long run on this title.

Squadron Supreme #1 is a huge issue that will have a long lasting impact on the Marvel Universe. The creative team has come out of the gate with all barrels blazing and I’m excited to see where they take this story next. If this is going to be Marvel’s equivalent to Earth 2 then I am all in, if for no other reason than to see what havoc this team causes. Bring me more Squadron Supreme, stat!