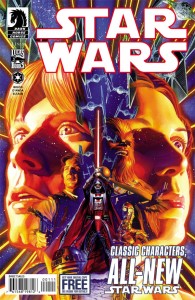 You’re going to hear a lot of noise over the next few days that the new Star Wars series from Dark Horse is the best Star Wars comic since Dark Empire. You might even hear someone say that it’s the best expanded universe title since Timothy Zahn’s Heir to the Empire novel trilogy. Don’t believe it. Neither of these things are true.

The truth is that Brian Wood and Carlos D’Anda’s new comic might be the best addition to the broader Star Wars mythology since The Empire Strikes Back.

Now that’s a big burden for a single 22-page comic to bear. There’s a lot of room for things to go right or wrong by issue #2, much less a year or two down the line. But all by itself, in just twenty-two pages, Star Wars #1 strips a bloated and strangely rigid continuity back to the hardscrabble wonder that must have been so thrilling back in 1977. Starting almost immediately after the destruction of the first Death Star, the Rebel Alliance is searching for a new base. Even though they’ve just won a major victory, the Empire doesn’t seem to be reeling as much as might have been hoped. In fact, it seems like the Imperial war machine hasn’t slowed down at all. As if to emphasize this fact, a Star Destroyer drops out of hyperspace right on top of a small group of X-Wings scouting for a new home in one of the most remote corners of the galaxy. One of the fighters goes down, and soon the pilot is fighting for survival on the surface of a strange world against the pilot of the TIE Interceptor that went down with her.

In what is perhaps the single most brilliant move in this compelling but not otherwise unpredictable story, that pilot fighting to survive is Princess Leia, who just a few minutes ago was playing the experienced officer offering reassurance to another member of the scout group, a talented but inexperienced new addition to the Rebel Alliance named Luke Skywalker.

One of the problems with the prequel trilogy (and the rigid continuity of the expanded universe) is the way that it can make characters, relationships, and events seem predetermined.1 For the first time in recent memory, I’m genuinely excited to find out what happens next. As a (sometimes) recovering Star Wars geek, I’m especially happy to report that this unpredictability comes from Wood and D’Anda reaching back to the unique and sometimes neglected particulars of the first film. It’s easy to forget that in 1977 Darth Vader wasn’t actually in charge, and that he was competing for authority not with needlessly exotic super-criminals, but with the established military command structure. Luke really was just a kid who grew up on a farm in the middle of nowhere. And one of the first things we saw Princess Leia do was to shoot a stormtrooper.

If all that doesn’t have you on board, think of it this way: By putting a capable, complex Leia at the center of the story, emphasizing the fragility (and maybe the moral ambiguity) of the rebellion, and refocusing attention on the supporting cast — a blink-and-you-miss-it mention of covert security and encryption codes programmed into C-3PO, a shift in Chewbacca’s casting from noble savage tied to Han by a life debt to a full and active partner in getting into trouble — this comic might be the closest we’ll ever get to a Joss Whedon Star Wars project.2

My only real concern is that with the Star Wars license shifting to Marvel comics in the foreseeable future, this might end up being a title cut off before its time. But really, that’s all the more reason to catch this series while you can. It’ll be worth every page and every penny.

And maybe, just maybe, “Leia shot first” will be the new “Han shot first.” I’d buy that t-shirt in a heartbeat.

1. Because, of course, they are. Since nothing can conflict with events that have already been established, there’s no real doubt that Padmé Amidala will give birth to twins and die, or that Obi-Wan will defeat but not kill his former apprentice Anakin, who will be rebuilt as Darth Vader. Even worse, these events too often unfold without any real spark of invention, which can make the reader feel a bit like Doctor Who would if he were forced to travel in a universe in which every single event, no matter how insignificant, was an unalterable fixed point in time. What could possibly be more dull?

2. Or, if you’d prefer, a spiritual sequel to Firefly. Set in the Star Wars universe.