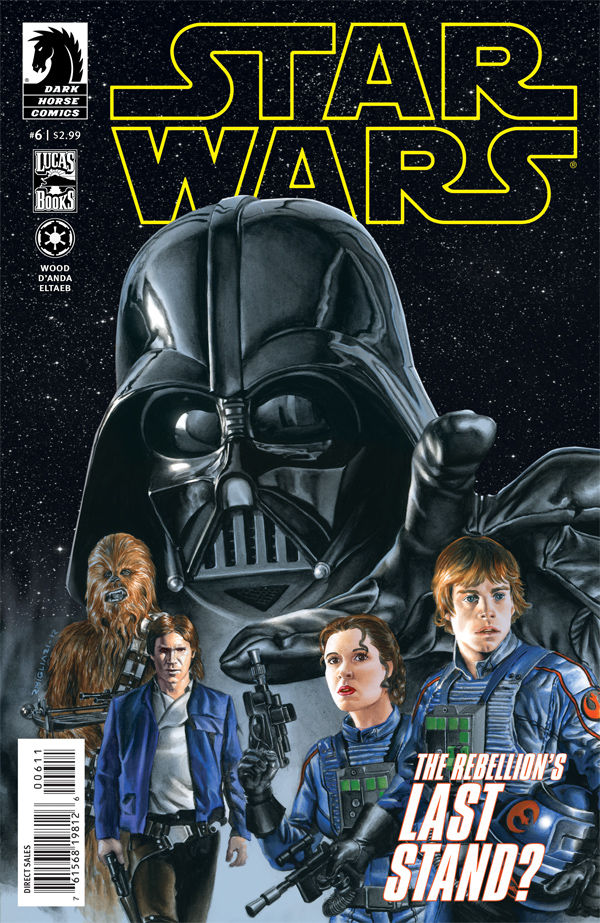 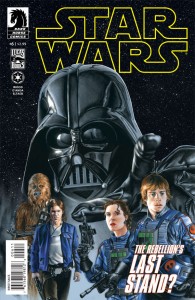 The first arc of Dark Horse Comics’ new Star Wars epic is now complete and — obtuse spoiler alert — it definitely goes out with a bang. Leia’s secret rebel fleet finds themselves stranded and only one jump ahead of Colonel Bircher’s Imperial Star Destroyer, while Luke and the mysterious pilot Prithi have been grounded for breaking protocol. Not the best timing or circumstances all around. How Brian Wood manages to pull the team back together and keep the rebels ahead of the Empire, however, is where we come in.

Wood has a sincere grasp on the atmosphere of the original films that I haven’t seen in any other expanded universe offering since the very first attempts of such. His Princess Leia, who remained the central figure of all of the first six issues, takes the best of the film version and builds upon that characterization magnificently, establishing her as an active combatant and in-the-field leader that we see at the beginning of Empire Strikes Back. This Luke Skywalker is a still green, rather impulsive character, not seasoned by the events of the second and third film still in his future, but his heart and loyalty to Leia and the rebellion shine through. I also have to give Wood props for mitigating the somewhat creepy texture of Luke and Leia’s interactions towards the end of A New Hope. He may not know she is his twin sister, but at least he doesn’t spend his time making googly eyes at the Princess. His commitment translates as loyal bond far more than romantic interest, thankfully. The introduction of two additional female fighter pilots, particularly the strange seer Prithi, helps enormously toward this cause, because honestly, when there’s only one woman in an entire universe, things are bound to get a bit weird for the boys around her.

The ultimate battle scene (if one can even call it that, one-sided as it is) is absolutely spectacular, both in breakdown and illustration. D’Anda has done a magnificent job of delivering characters that read close enough to the original actors to be recognizable, but of their own unique form — so much so that we almost forget his talent at choreographing these space scenes where the central figures are fighter jets and star destroyers, not individuals. His Star Destroyer, appearing in the vastness of space to fill the entire frame, feels as if its all you can see in one direction, and the juxtaposition of that against the rather miniscule feel of the rebel forces really drives the scope of the rebellion home. As a child, I went into Star Wars feeling like the Rebels and Empire were equals in strength battling as would good versus evil in a super-hero universe — opposing forces balancing each other. Here we get the real sense that this is a desperate, nearly losing battle, and the tension that delivers makes for a stronger story.

If you haven’t had a chance to sample this new effort at building out the Star Wars expanded universe, know that this is likely the best we’ve ever seen in those efforts. This series has slid right in comfortably to the post-Battle of Yavin period, reflecting the tone of the initial film so elegantly, but truly embarking on a new story that doesn’t feel irrelevant in the slightest. The characters you loved as a kid (or adult) are all here and actually rendered with a sophistication and comfortable familiarity that is difficult to achieve in any film adaptation/expansion, much less such a high profile, well-treaded one. Do yourself a favor. Hit the comic shops (or digital store) and pick up the first six issues. Or if you’re so inclined, pre-order the collection. Or both. This is one series worth spending the dollars on for the sheer enjoyment of it all.