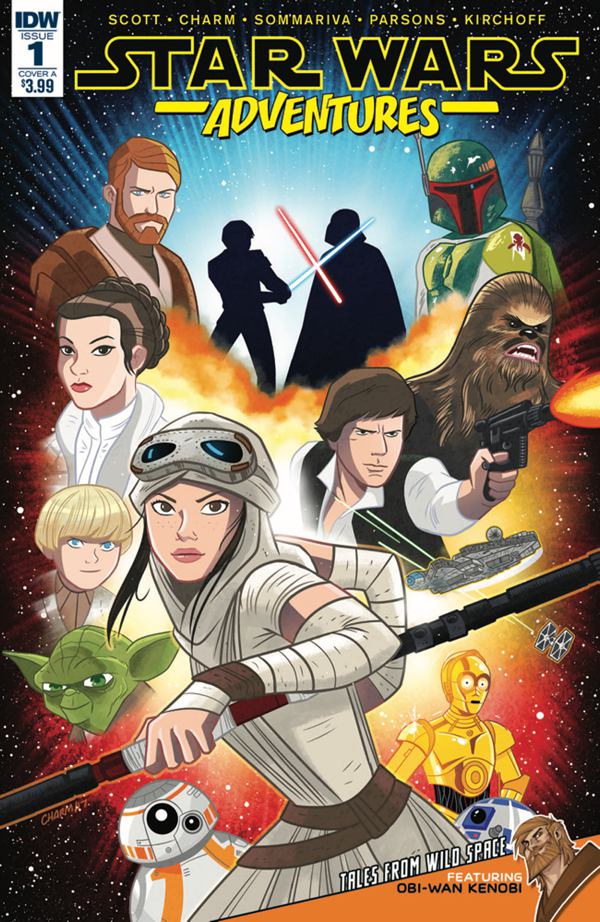 An all ages Star Wars comic seems like just the right thing the comic book industry needs. I could open a debate on why this makes sense coming from IDW as opposed to Marvel, but that’s neither a debate I’m prepared for nor do I want to participate in it. It doesn’t matter WHERE it’s coming from, it only matters that it exists.

That said, Star Wars Adventures #1 is less approachable than I expected it to be. Yes, Star Wars is arguably the most recognizable property in the world, and, yes, everyone should know who these characters are by now. That said, the story presumes you have a bit of familiarity with Rey and with Obi-Wan Kenobi.

No, that’s not a spoiler for Star Wars: The Last Jedi. Nor does it reveal a darn thing about Rey’s heritage. This comic simply has two stories: one with Rey. One with Obi-Wan.

Writer Cavan Scott is targeting readers who know that Obi-Wan is a Jedi and that Rey is the star of The Force Awakens. These are tales that are too small, too brief, or too finite for the silver screen. These are stories between stories.

Scott is clearly writing them for a collected version of some design, as the lead story in Star Wars Adventures #1 follows Rey as she tries to track down a vanished Unkar Plutt (a little more detail is provided on Plutt’s circumstance, but only because there was a lot left unsaid to this point) and the lead story of this issue ends in a cliffhanger.

The second tale in Star Wars Adventures #1 doesn’t leave readers hanging, but presented under the banner of “Tales from Wild Space,” readers can presume there will be more stories from Master Emil and his droid, Crater.

The art in both tales is playful and approachable, reminiscent of Bruce Timm’s Batman: The Animated Series style without being beholden to Timm’s work. The details of Rey’s appearance are nondescript enough to be comfortably familiar as Rey, but not locked into a Daisy Ridley. Derek Charm gives his animated characters plenty of personality and diversity in movement and expression, springboarding from the character designs that are so familiar to any readers who have seen The Force Awakens.

Jon Sommariva’s work is more angular and his pages are more dense with panels. There is plenty of familiarity present in the characters in the “Tales from Wild Space” segment, which includes Clone Wars-era Obi-Wan, Dexter Jettster, and a Pa’lowick (think Sy Snootles from Return of the Jedi). The story breezes by in six pages, as Emil tells Crater about the adventures therein while the art immerses the reader in Emil’s story. I’m not sure what the plan is for this segment, but Scott and Sommariva provide an interesting take on this time frame. Dex is a perfect character for the tale and the style, and I would welcome getting to know this character a bit more.

Star Wars Adventures #1 is a nice opportunity to put Star Wars comics in front of a new audience. It’s not flashy or glamorous, but it has enough character and heart to win readers over. The cover to the issue sports a large swath of fan favorites while the adventures within span the timeline of the movies. I’ll be back for more, and I look forward to seeing where else in that galaxy far, far away we go to.