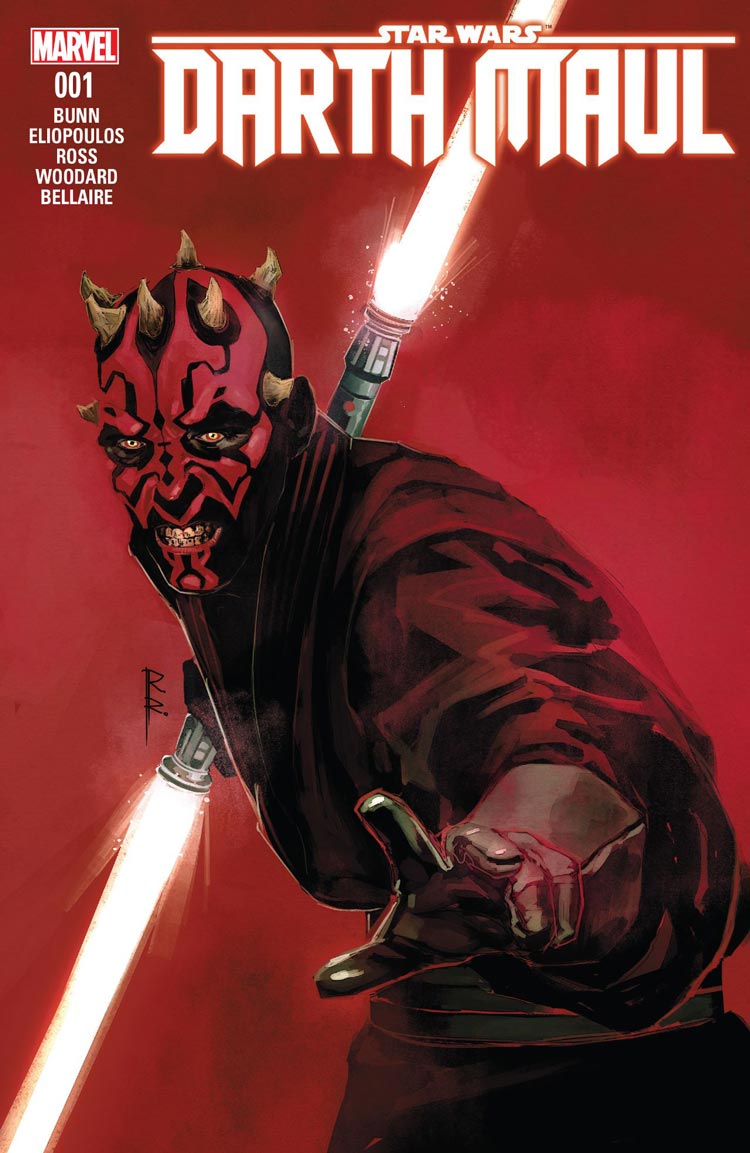 Both the master and the student have their own secrets.

Darth Maul is a hunter, searching for suitable prey. Intergalactic monsters are no substitute for Jedi, though, and he finds himself at odds with his lord and his bloodlust. Pursuing a mission, he takes matters into his own hands, embarking on a quest to find freedom while keeping his master in the dark.

We know Darth Maul is not one for words, and to seeing so much of the story in the context of his introspection is suited to his brooding presence. He has relatively few lines of dialogue compared to other characters, and what he does say is a defense of his actions. The fact that his inner monologue drives the story helps to convey his desires with minimal words. Moving from his battle with the rathtars, to his clandestine confrontation on Kellux, we see the dark motivations which drive him, similar to that of any Sith apprentice. This quiet, shadowy story takes us straight to the heart of the dark side and all the emotions which accompany it.

Cullen Bunn masterfully uses Maul’s perspective to set the foundation for the story. I like that Maul has the fewest words of anyone and that his thoughts are relatively simplistic even as they point to his complicated feelings about belonging to the Sith. The set up is excellent, putting him at odds with his duty and his orders, while staying within the tradition of the Sith betraying each other and eventually surpassing their masters. Larger mythos aside, I think there could be some excellent stories to tell based on this first issue, and it’s a great introduction to a character whose intrapersonal workings have largely been mysterious since his first appearance.

Luke Ross takes us on a visual trip through the galaxy, catching the weirdness of a planet full of life as well as the technology that spans the light of a city. Nolan Woodard has similar skills when adding color to wild worlds and the vastness of space. These two work together to illustrate the diversity of settings within Darth Maul, from spaceships to myriad aliens. I like that, despite the fact that there are plenty of bright colors and a variety of settings, all of it is still touched by Maul’s own feelings, the darkness that drives him and his passion.

Chris Eliopoulos and Jordie Bellaire’s short story is an endearing touch next to the tale of a Sith apprentice. With very few words and dialogue, this duo crafts the heartwarming bond between two droids. I always find it so amazing to see these machines form bonds in the way they do. Eliopoulos expresses their sentience through their feelings of loneliness and longing, made all the more touching as one droid decides to stay on Tatooine. Bellaire uses soft displays of machinery to add life and energy into these metallic beings.

Darth Maul #1 explores the inner world of the Sith warrior, giving context to his cruelty toward others. He endeavors to face a real challenge, and will plunge himself into the depth of danger to find one, whether that be monster, Jedi, or his own master. The story is a nice addition to the Star Wars comic line, and it’s a great read whether you like the character or the lore itself.