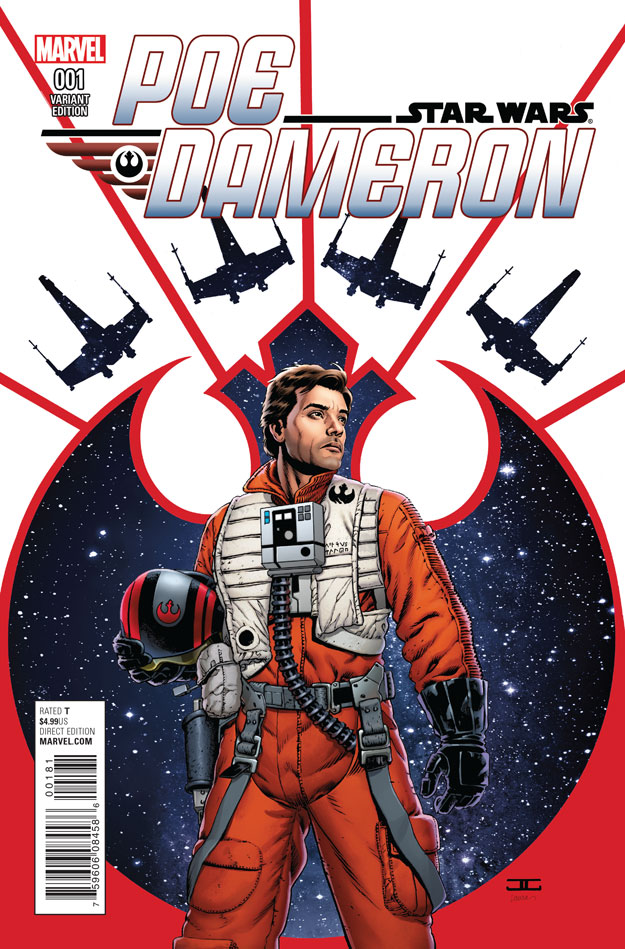 In Poe Dameron #1, General Leia Organa authorizes Poe Dameron to assemble a squad for a mission that leads directly into the path Poe is on at the opening of Star Wars: The Force Awakens.

The team Poe brings together also bridges the gap between the recent movie and the Greg Rucka-penned Journey to Star Wars: The Force Awakens – Shattered Empire comic series by bringing in the Duros pilot L’ulo. Writer Charles Soule adds in passing conversation and warm welcomes between Black Squadron teammates to provide details about the thirty years between Return of the Jedi and The Force Awakens.

The story itself is a straightforward retrieval mission, but Soule provides enough range to the tale, from the Resistance base on D’Qar to the vast unknown as explored by Black Squadron, to balance Poe Dameron #1 between adventure tale and world-building exposition. At no point, however, does this comic tread far away from the titular star, keeping Poe Dameron in the spotlight and expanding on the personality hinted at in The Force Awakens.

From the opening panel zoomed in tightly on Poe as he pilots his X-wing fighter into readers hand, Phil Noto’s art captures the essence of Oscar Isaac, committing the actor to the comic book character and making the transition for readers quite easy. Noto’s art is gorgeous more often that not, but, as happens to easily with adaptations, some of the visuals in Poe Dameron #1 are prone to fits of rigidity.

Those occasions aren’t as noticeable in the quieter moments, but when a stiff figure pops into an action sequence, it acts like a rock breaking the flow of the artistic waters around it. That happens infrequently in Poe Dameron #1, and I’m certain more often than not, it is a direct result of Noto finding his groove. Noto’s color choices are controlled and sensible, apropos for the Star Wars galaxy. The gradients and shades Noto employs add texture, depth, and emphasis to the story, amplifying emotion and helping layer the visuals throughout the panels.

Noto’s interpretation of BB-8 is spot on, and letterer Joe Caramagna makes BB-8’s dialog unlike anything else in comics. Poe and BB-8 have plenty of interaction to interpret the droid’s peeps and squeaks for readers. Caramagna letters the rest of the issue smartly, as Soule keeps the dialog lean to keep Noto’s art clean and the story clipping along.

Despite not moving along at breakneck speed, there’s plenty of drama in Poe Dameron #1. Soule, Noto, and Caramagna are meticulous in the portions of Dameron’s orbit they choose to reveal. Poe Dameron #1 fills in space between stories, butting up against the restrictive parameters installed by the films surrounding the time period, but the galaxy at this point remains largely fresh for readers.

This issue also has a backup story from Chris Eliopoulos that gives BB-8 a chance to take the spotlight. Eliopoulos’ art is reminiscent of Bill Watterson’s Calvin & Hobbes work, and the story’s tone fits the look. Adding this behind the lead story of Poe Dameron #1 gives readers a nice sample of the limitless possibilities of the Star Wars universe in the pages of Marvel Comics. And it underscores just how solid the entire Star Wars line is.