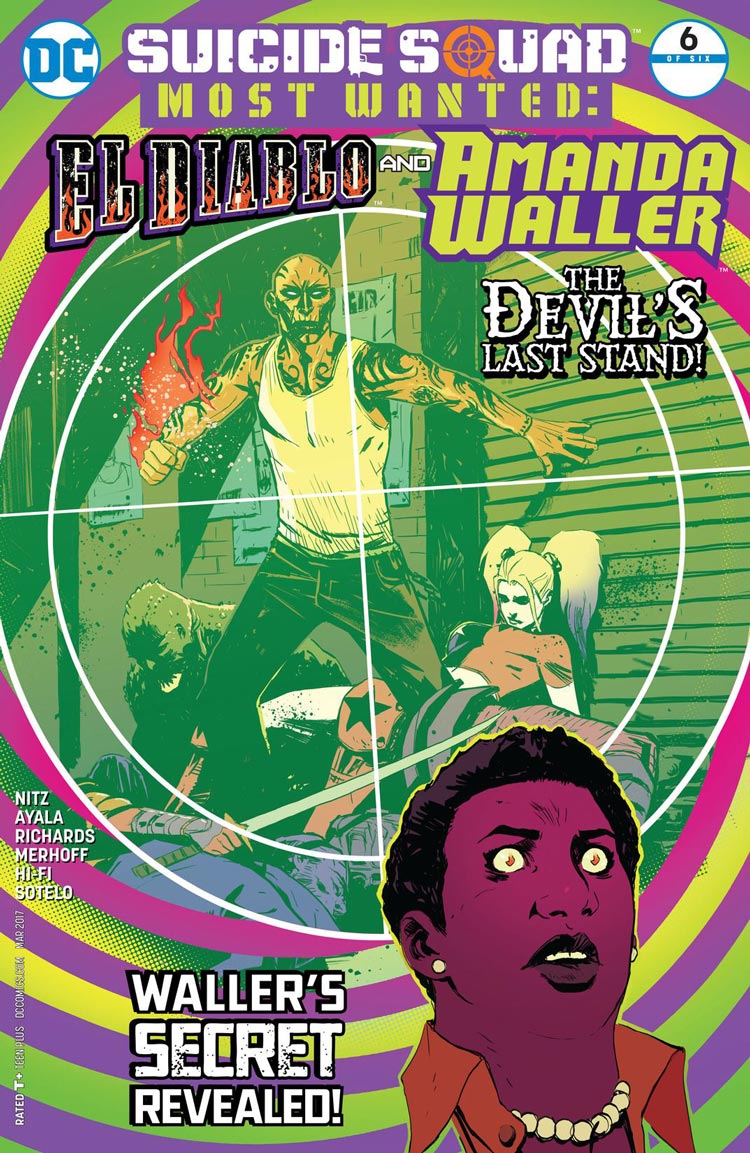 Something came up at the office.

Diablo, aka Chato Santana, fights a battle against an enemy who seeks to combine many forces to become a formidable foe, while Amanda Waller faces her own ghosts in the struggle to wake up. With a climactic finish, both see victory in different ways, opening doors to new and revitalizing futures.

Chato’s story comes to a finish in a way that’s true to his name. Assuming the powers of the demon Chutriel, he defeats Dalesko and gives promise to not only his future but to others’. I like this half of the story because it shows that, even as a member of the Squad, Chato is much more than a villain at the mercy of a larger power. He demonstrates care and love toward Azucar and fights his hardest to make sure that there is no more loss than there needs to be.

I like that Jai Nitz takes on the narrative use of the demon to tell a story of heroism and that in doing so it showcases Chato’s compassion for others. The Suicide Squad could be an easy villains-doing-the-right-thing kind of story, but this final issue shows that such a narrative can be emotionally and morally complex. Chato may see the raw end of a deal with the devil, but it at least worked out in saving others’ lives.

In the second story, we traverse through Amanda’s mind while she is at the whims of the Dark Mirror. We know who she is as the handler of the Suicide Squad, and as a woman who is not afraid to sacrifice a life to save others, we see her own pain and grief laid bare.

What I love about this story is that she does not buckle; at every turn, she challenges her hallucinations and does not give in to their machinations of grief and pain. Instead, she bucks. This short tale captures the entire reason I think Amanda Waller works, and it is a quick and dirty journey into the adversities she faced before and during her tenure as a supervillain wrangler.

Vita Ayala definitely did the necessary homework in creating this story and it shows. Even Amanda’s vulnerabilities are carefully crafted in a way that shows her guile rather than weaknesses in her defense.

Cliff Richards and Hi-Fi use earthen tones and dark images to tell Chato’s story. These techniques match not only the scenery, but the dark and firey elements within Chato’s victory. Brown, orange, and red mark the story with the evocation of fire, while the shadow helps to convey the reality that Chato may not fully be redeemed, casting shadows over his good work. Some of the images feel awkward, such as Chato standing over his body and the characters’ expressions, but overall the illustrations are helpful as parallels to the narration.

For Amanda, Beth Sotelo’s colorwork is awe-inspiring, moving between haunting psychedelics and dismal tones, firmly enmeshed in Matt Merhoff’s strikingl idyllic art. There is a very thin line between fantasy and reality, which I feel makes the story that much more surprising.

As Amanda faces her own demons, the distinction is clear between the effects of the Dark Mirror and her reality, though Matt Merhoff uses tricky skills to blur the walls between these two kinds of images. The end of the issue still doesn’t feel fully separated from Amanda’s ‘dream,’ a disturbing honesty emanating through the last bittersweet panels.

This last issues of Suicide Squad Most Wanted shows the intricacies of the team and each of the members. They are smart, they are cunning, and they are deeply flawed, all elements which are important to this kind of comic. I like how things play out and I like the subtle hints as to the dynamic feelings of the major characters. Things may be more complicated from this point, and the creative team gives awesome clues as to why that matters.