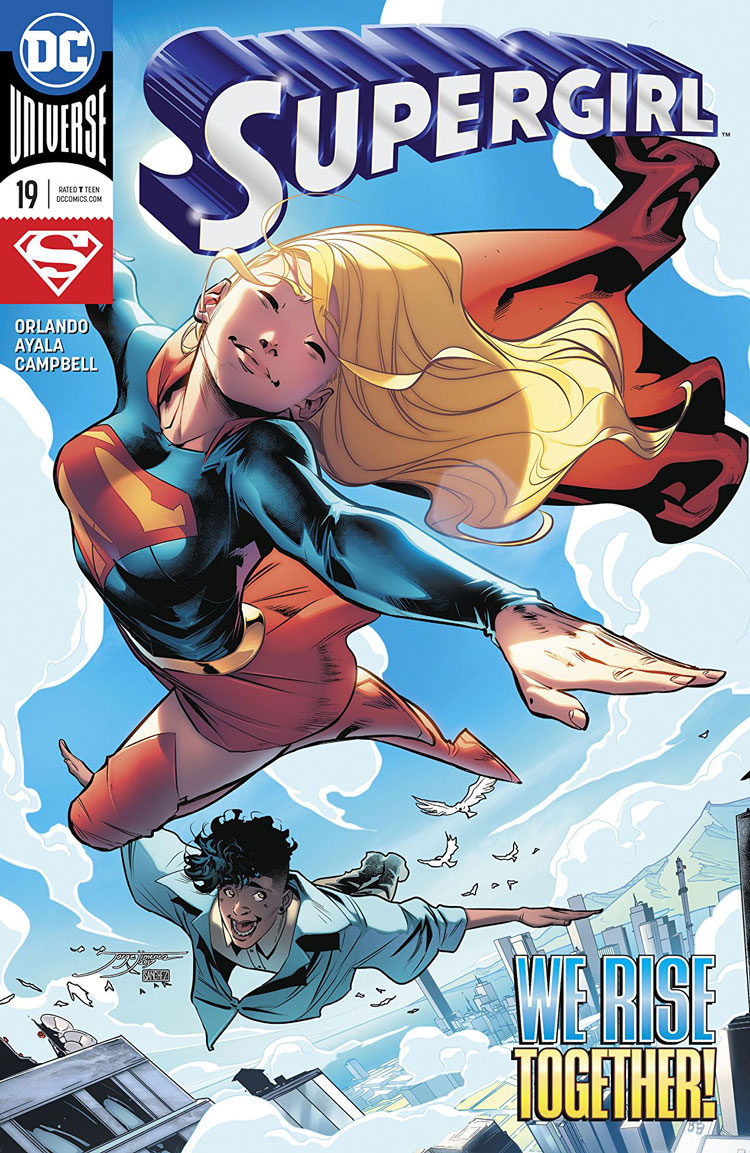 Before we start, I need to let you know some things.

First, I don’t really know anything about Supergirl. I’m vaguely aware of her origins and that there’s a TV show that people seem to like, but beyond that I’m sort of a blank slate.

Second, for the purpose of this specific review, I’m not sure any of that matters because I’m not reading this book for Supergirl. Don’t get me wrong, I’m sure she’s great, but I’m here for Lee — and the first non-binary character/coming out story I have ever encountered in mainstream comics.

As a non-binary person myself, you can imagine it’s sort of a big deal for me. And luckily it’s coming from writers — one of whom is also non-binary — that I trust to not heck this up.

Third, spoilers. BIG OL’ SPOILERS, all the way down.

So, now that we’re all square, let’s get going.

Written by Steve Orlando and Vita Ayala, Supergirl #19 moves away from the main narrative of Supergirl to focus new character Lee Serrano. Lee tells us how and when they met Supergirl and about the connection they have formed following their subsequent interactions. It’s a connection wrought from the knowledge that they are both more than they seem, that they both have secrets, and that they both feel alone.

It’s touching, and the ways in which Orlando and Ayala balance the internal and external factors that dictate Lee’s actions and decisions as a teenager, potential runaway, victim of bullying — a person who wants to fit in and not disappoint their parents — in handled with honesty and sensitivity. Supergirl is open and sympathetic, acting as both a friend and an ally. She listens, not just when Lee wants to talk but also when Lee chooses to act, stepping back to allow for Lee to take center stage (but still making her presence and in turn her support known).

To Lee, Supergirl is a tangible symbol of hope, ‘side by side.’

Jamal Campbell’s artwork is equally sensitive to the issue, with the body language and facial expressions in particular showing the depth of emotion felt by Lee as they navigate, school, coming out, and their friendship with Supergirl. Sticking to a fairly neutral tones palette, Campbell has allowed for Supergirl to stand out, doubling down on her presence as a visible as well as tangible foundation for hope as her red cape cuts through the page.

Visually, Lee Serrano presents as androgynous and up until their coming out to Supergirl, neither their actions nor the way others treat them points to them being either of the binary genders. This changes when we see them try to enter a ladies bathroom at school. They are pulled away and confronted by male classmates who accuse them of trying to ‘snap pictures in there’.

It’s unclear if they understand the way in which Lee is different or if they just detect otherness in that way teens are so apt at doing. What’s particularly interesting in this scene is that the girls who are entering the bathroom at the same time show no distress at Lee’s entry. It is the boys who express a misguided need to ‘protect’ the girls from Lee. And when I say interesting, I of course mean gross and timely.

The book has two coming out scenes. One between Lee and Supergirl, the other between Lee and their parents. While both are handled differently, they both show the difficulty that is coming out and highlight the fact that it is never a once and done scenario. Coming out is as endless chore where you can never be sure of the response or reaction of those you are coming out to.

This is clear in both iterations, as Lee is shown with eyes down and shoulders hunched. It is not a conversation I have had with my parents, I don’t know if I ever will, but Lee’s parents response is essentially an ideal situation. They don’t understand — fair, they don’t want life to be anymore difficult for their child than it needs to be — understandable, but they will try and they will learn because they love Lee.

It’s sobering, and its heartfelt, and paired with Lee’s explanation of how it feels to be non-binary I think it will give people the knowledge they are not alone and the courage to speak out and find a community.

Overall the book is a triumph. It’s a step forward and it’s something the creative team should be proud of. It’s a book that’s going to be talked about and start discussions and maybe help some people work through some things. I don’t know that my words have done it justice but I would urge you check it out, if only as an example of something done right, and with nuance from the creative team down to the execution.