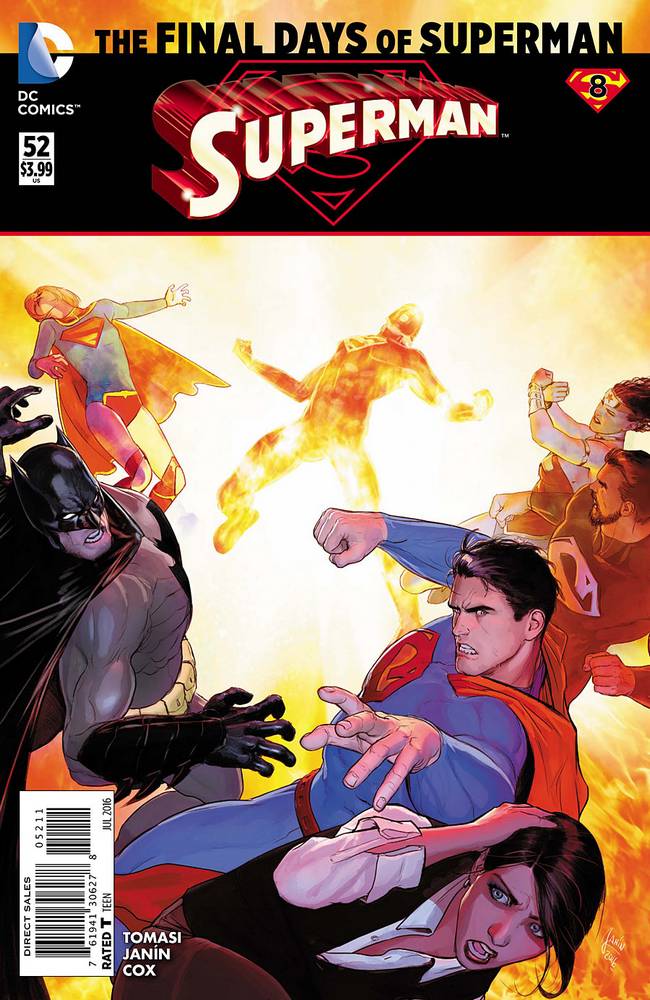 “Do or Die” closes out “The Final Days of Superman” story, dovetailing the adventures of the Last Son of Krypton into the developments of Rebirth. It’s poised as an emotional finale to be certain, but it’s simply isn’t as rich in emotional resonance as the conclusion of Superman’s life should be.

Maybe part of the reason is, as one Superman dies another one is standing right next to him. Maybe it’s because Rebirth came out the same day as this issue and there is a full line of Superman titles launching soon. Whatever the case, while Superman #52 is solid and entertaining, it just isn’t gripping. Of the comics coming out this same week, I’m certain Superman #52 won’t be the one that readers recommend to their friends.

Through bombastic bright orange flames and explosions courtesy of colorist Jeromy Cox, writer Peter J. Tomasi and artist Mikel Janin (with an assist from Miguel Sepulveda) tell the story in widescreen action and explosions. Superman and his allies (Batman, Wonder Woman, and Supergirl) stay in the fight against Denny Swan, the would-be Superman. Having taken on powers and memories from a bolt of sentient energy, Swan believes himself to be Superman. He has memories and powers matching the Man of Steel. He also looks a bit like the Fantastic Four’s Human Torch wearing a Superman jumpsuit.

The story has a grand scale during the fight scene, which thankfully avoids metropolitan areas and civilian collateral damage. Tomasi’s decision to set the battle in the countryside and in space certainly gives Janin and Sepulveda plenty of opportunity to focus on the fight and the combatants, and the story looks great.

This is the eighth and final chapter of “The Final Days of Superman,” but it is every bit as approachable as the first. Tomasi provides plenty of explanation of the situation and characters, captions boxes and dialog. He even gives Superman a chance to say his goodbyes. And then, Tomasi cracks open a whole new beginning. Readers know Rebirth is happening, but the shift from what should have been somber and heartfelt to what is yet to come lets the emotions out of the story.

Janin and Sepulveda, with Cox’s colors, give readers a clean, sharp story with dynamic characters. Their story unfolds through strong storytelling as Cox unleashes magnificently saturated colors to augment the action, embellish the inherent absurdity, and emphasize the fantastic elements in this story.

Taken as a single slice of the adventures of Superman, Superman #52 gives readers a lot to digest. Set in the context of an eight-part story, it becomes a not-quite-so-satisfying conclusion. Read as the bridge between what was in the New 52 and what could be in the Rebirth era, Superman #52 is a sharp transition that gives readers plenty to look forward to.

This story didn’t deliver on the Super League premise it was originally solicited with, at least not in the context of this eight-part adventure, but on the second to last page of this issue, Tomasi, Janin, and Sepulveda give readers a knowing nod that maybe, just maybe, it actually did deliver. We’ll just have to keep reading to find out how. One thing is for certain: the S-shield is still flying through the skies of the DC Universe, and, for the first time in five years, that symbol has me thinking that it (maybe, just maybe) means “hope.”