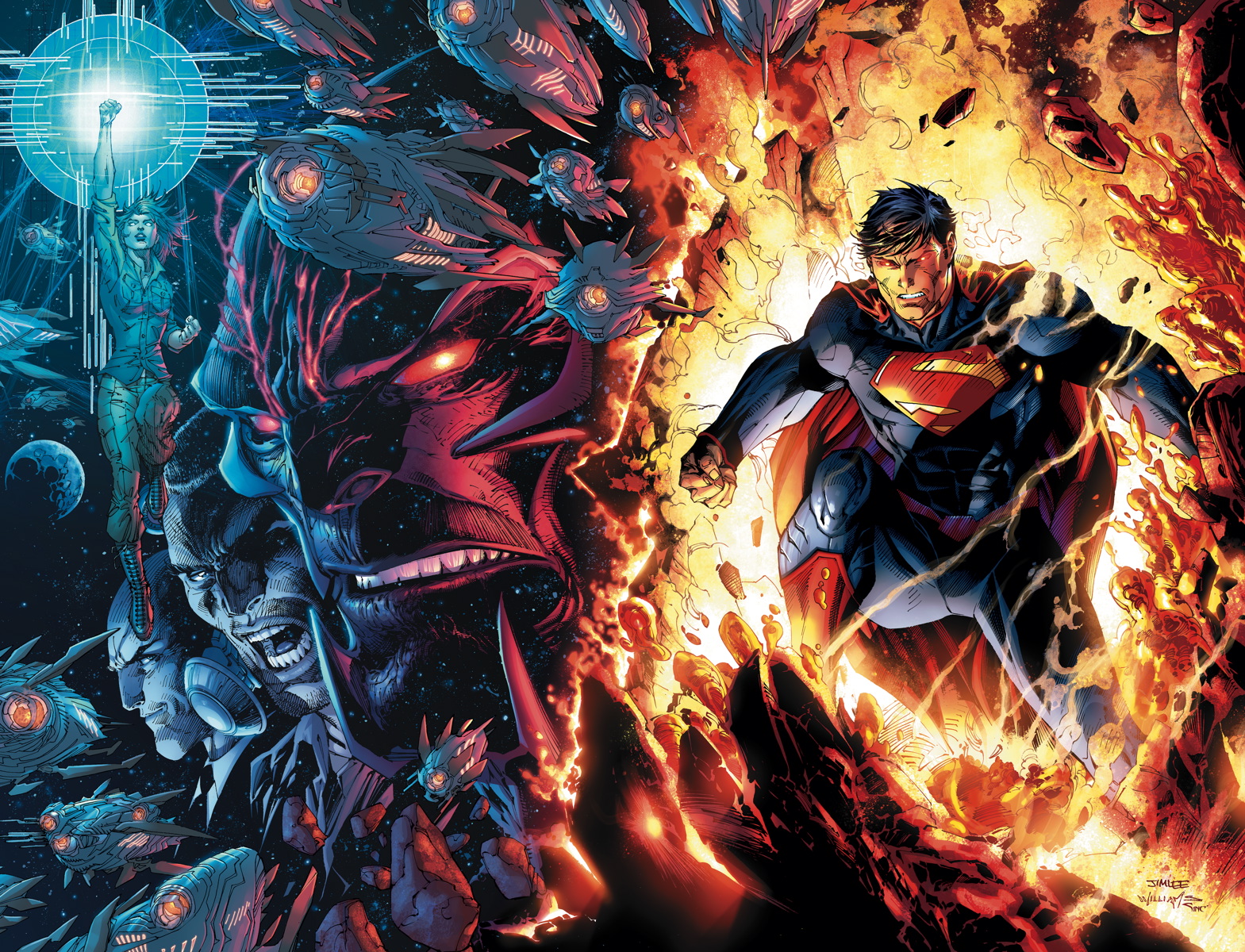 The secret behind Wraith’s existence comes out in the open and the key to saving mankind is… the death of Superman? As Lex Luthor offers Superman the means to sacrifice himself for the good of humanity, we get one last insight into how the Man of Steel developed into the hero we know him to be.

The conclusion to Superman Unchained has been a long time in the making, with the first issue arriving in stores the week Man of Steel hit theaters (oh, a lifetime ago). What we have in its completion is a strong comment from Scott Snyder on the kind of man Superman tries to be, wrapped in an exceptionally beautiful — and consistent — wrapper of Jim Lee art. It’s the kind of story I suspect we’re going to underappreciate for some time, and then rediscover as fans on our own as time goes on.

That fact strikes me particularly because Unchained, and its conclusion with issue #9, tells a much more subtle and complex narrative about Superman’s thought process and experience than we’re used to. Snyder’s Kal-El is no less stoic than the traditional Man of Steel, but his rationales for action and experience in learning to get to where he is now are so much less staid and concrete than we’re traditionally handed. Superman is the product not simply of a highly progressive alien race, or parents with Midwestern values in the heart of America. He’s the product of his own trial and error.

And that’s perhaps what makes him the most human — even fallible — of all the characters in DC’s pantheon.

This fallibility is often railed against by diehard Superman fans. Heck, some have even been known to shout about it in crowded theaters. But put up against the near godliness of his best friend, the Dark Knight, and the actual godliness of his lover, the Amazon Princess, Superman’s humanity and appreciation for genuine shades of grey — not simply what we like to call shades of grey, but really is an emptiness of morality — is so compelling.

Lex Luthor’s motivation here is less complicated, perhaps intentionally so to contrast Superman’s purity of motive paired with willingness to fail for the greater good. His megalomania extends far enough for him to be sipping wine in a remote location on the cusp of global destruction. But the shining star among the cast remains Lois Lane, who has taken a prime role in the entire storyline, but once again reinforces herself as a role model for Superman himself, as much a complete 180 from the Silver Age trope of their relationship as Clark’s fallibility is.

Lee’s art, uncharacteristically, finds its brightest moments in the interactions between Clark/Superman and Lois outside of the battlefield. Their moment of goodbye is so beautifully rendered, with everything from body language (Lois’s tiptoes) to panel pacing (the cascade effect is so wonderful) adding up to the most powerful visual scene in the issue. You get everything you need to know about the friendship between Superman and Lois here, and likewise, the same between Clark and Lois upon their phone call at the issue’s close. Even without dialogue, you’d just know what they mean to each other — usual bluster aside.

Dustin Nguyen once again steps up to contribute pages, here the conclusion of a flashback scene that will knock your socks off. Unlike the earlier epilogues, these scenes have felt completely natural to the flow of the story, and add the kind of visual difference that solidifies the kind of trauma that led Clark to the be the type of complex decision-maker he is today.

With the conclusion finally in your hands, Superman Unchained #9 represents the closing of a stylish narrative loop that demands a bit of thought and a lot of compassion from the reader. Snyder and Lee have done Clark proud. May they be appreciated for it by all who hold this Kryptonian near and dear to their hearts.