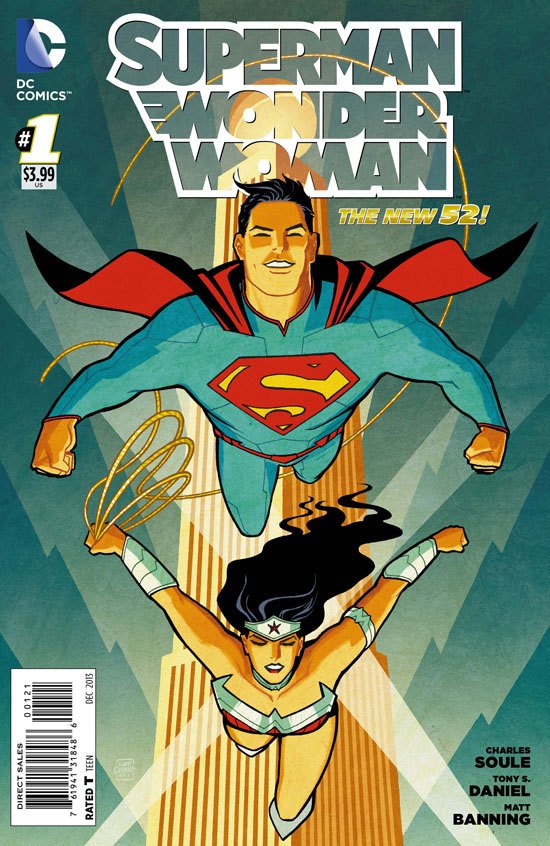 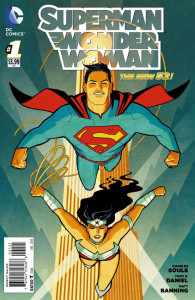 Ready or not… here they come.

In a first chapter appropriately titled “Power Couple,” we get a real commitment from DC Comics on (at least) the near future of the relationship status of DC’s top two super-heroes. So, after all the handwringing and shouts toward the sky, mostly over what this relationship specifically does to Wonder Woman, how does Superman/Wonder Woman #1 treat the world’s foremost heroine?

Pretty darn well, it turns out. Charles Soule, of course, continues the tone of the relationship begun over in Justice League, but infuses a real sense of difference between the two characters that we haven’t had a chance to delve into as yet. It’s not exactly “Men are from Krypton, Women are from Themyscira,” but the reader is treated to some of the first real insight into how these characters feel not just about each other, but about the relationship itself. Diana’s inability to relate to Clark’s sheltered upbringing, and confiding such in her sister Hessia (oh, how happy I am to see a living Amazon introduced into the supporting cast), sets the story up with a sort of emotional honesty that accomplishes what this book needs most to succeed. It is imperative that Wonder Woman not be portrayed as intellectual second fiddle to Superman, that she remain emotional vulnerable without devolving to a naïve school girl trope, and that she kicks as much ass as is godly possible. Soule delivers on all three fronts. His Diana is strong, determined, may bring more to the table in this relationship than Superman, and knows it too. As the first writer to bring Wonder Woman to a second eponymous ongoing title in over 60 years, Soule does Diana proud.

This is not to say his Superman is lesser by comparison, in fact. Soule brings the sense of alienation that has been bandied about by writers for the last two years, since the launch of the New 52, and fully realizes it in the most genuine way possible. This is no Martian in disguise, but a man who has lived his entire life in a closet of sorts, having to monitor his emotional connections carefully, keep secrets for fear of exposure, and hold back from experiencing the best of what life could offer him. Clark is isolated, but not coldly alien, and while that has seemed a tricky balance for so many writers already, Soule knocks his characterization out of the park immediately.

Daniel’s art on this first issue is exemplary, really showing off the best of what he can do when given a measure of talking heads, mixed with a strong helping of all-out action. Particularly on Diana, the artist delivers a nice subtlety to her expressions, but doesn’t hesitate to plunge her into outright fury once she enters battle. There’s no sense of cheesecake to his depiction of the Amazon Princess, but her beauty and strength come through in every scene. Superman is a little less well-defined, with features often bordering on stoic or minimal, but one could make the argument that fits with Soule’s interpretation of Clark’s overall demeanor. Overall, Daniel delivers an issue that features several full to two-page spreads without losing any sense of complex storytelling or feeling like you’ve just flipped through a poster book. The detail is in there.

For those worried that Superman/Wonder Woman was code for a 1960s-inspired “Superman’s Girlfriend, Wonder Woman,” you can rest easy. Soule and Daniel have proven that it is possible, with the right care and smart characterization, to bring these two icons together without diminishing either one. Will this pairing last forever? Most certainly not, I’m sure. But in the meantime, I’m duly impressed with this bright start. It’s certainly the best I’ve seen Diana handled in a relationship to date, and gives us a whole new dynamic to consider for both characters. If you’ve doubted this pairing could work, or were frankly outright against it, I’d encourage you to give it a shot. The respect and thought put into these pages by the creators will win you over.