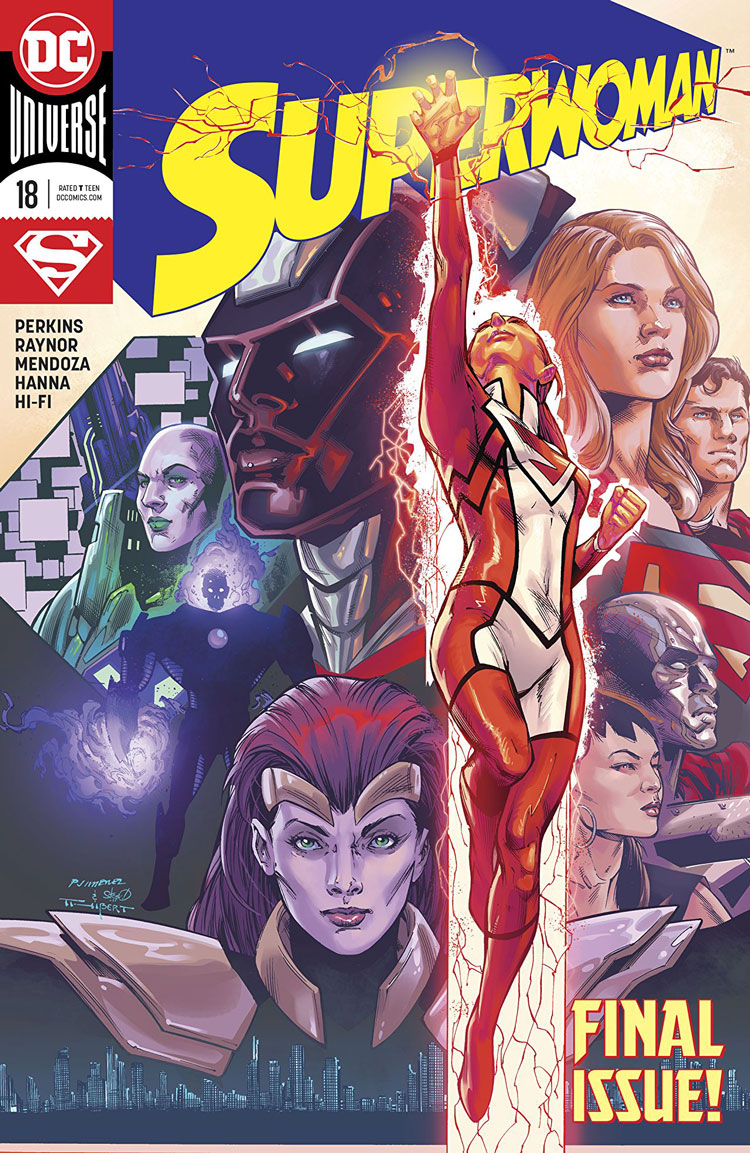 As DC apparently begins to wrap up its “Rebirth” story line titles, Superwoman is the first to end with issue #18. The story is a nice closure to the series without leaving things, as is the trend in comics, too closed-ended. Fans of the series will be pleased with this finale.

Perkins wraps the Superwoman series nicely with a story that focuses on the core qualities of a true hero. For all of the myriad super powers that heroes can possess, the most important one is love. The story is simple, but by no means unimportant. In many ways, the simplicity of the story echoes the importance of the core characteristic of Lana and the heart of Superwoman.

Though great power opens the door to many possibilities, it takes a simple heart to temper the desires of corruption. In doing so, it provides a model to even the darkest of souls on how to be good. The story also takes Lana around to her friends and lets her say goodbye to them in a way that really isn’t saying farewell. It’s not truly an end but step into the next chapter of Lana’s life.

The end of course is not necessarily “the end” as it isn’t explicitly stated what the outcome is. However, it can inferred what has happened. The overarching message, though, is hope for the future. From endings, there are always beginnings and possibilities.

Max Raynor’s artwork for this final issue ends on a high note. There are a number of panels that portray the epicness that comes along with the shield worn on Superwoman’s chest. There is clear power and heroism displayed in Raynor’s illustrations.

Still, though, there is a wholesomeness that is captured in Lana by his art and it is contrasted by the way the other women are portrayed. Midnight is portrayed coldly, though there is some trace of emotion found in her eyes towards the end. Maxima, Lois, and even Natasha all have a grown-up look to them that is very different from the innocence that radiates from Lana.

Hi-Fi injects colors that are deep and bright which gives plenty of energy to the story. As the story progresses we find lighter tones that end in the final panel with very normal color tones which matches the mood perfectly. The bright colors also alludes to the message of hope that the story ends on. Although there are some darker tones present in some of the panels that occur inside Lana’s mind the color choices still remain very vibrant and happy.

Jaime Mendoza and Scott Hana’s inks are nicely done and the stark thick black makes the colors stand out even more. Carlos M. Mangual provides clear lettering for this issue that gives voices to the characters.

In the end it may be the right time to end this run. With the rest of the DC universe taking off in a new direction with the aftereffects of the Metal story line Superwoman is a casualty of too many titles. Though Superwoman started and ran a little convoluted in the beginning and middle, it still has in the end developed into strong run both in art and story. This last issue quietly wraps up the run with enough tension to leave the reader wondering until the end. It ends on a hopeful high note and retains Lana Lang as the sweet girl from back home.