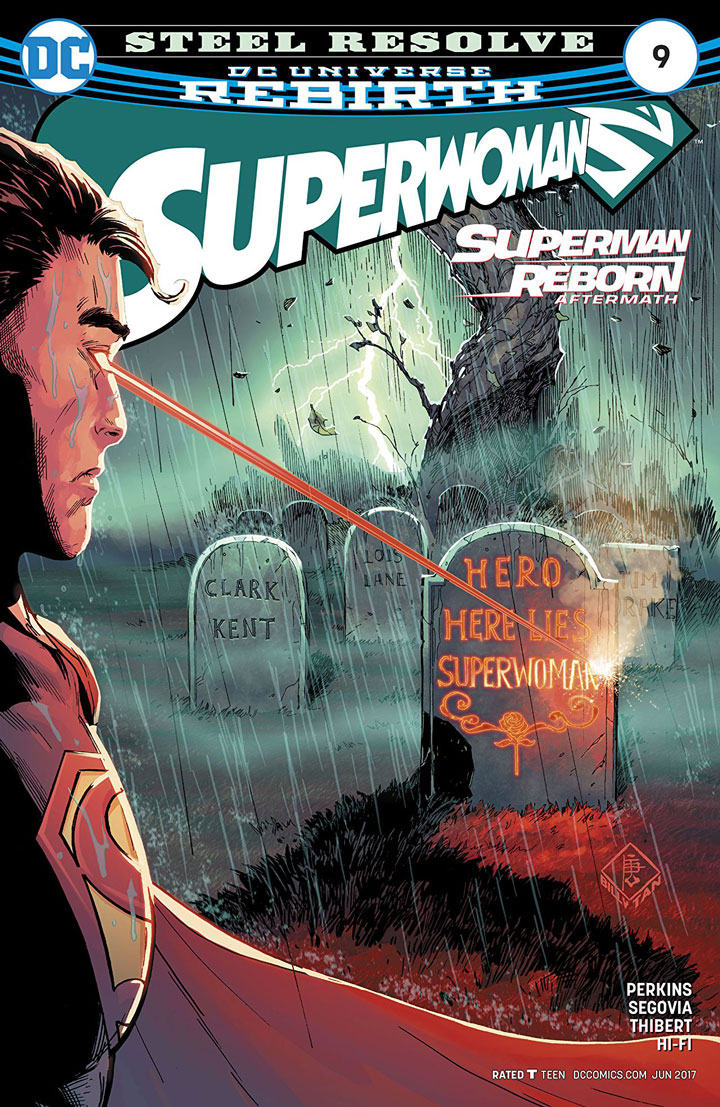 Lana Lang wrestles with the possibility of being a superhero without powers in Perkins’s first issue on Superwoman.

The issue starts off with Lana waking up inside the Kryptonian armor, surrounded by Lois, John Henry, and Clark. Kelex informs them that Lana is probably powerless after her last red flare, and she’s visibly shaken by this news.

Lana returns to the Lang farm in Kansas, happy to be human again but also deeply affected by the loss of her powers. John Henry tries to comfort her, but she doesn’t respond well to his attempts, thinking that he cannot truly understand what she’s going through.

Superman pays Lana a visit while she’s sitting on the roof, and Lana discusses her worries with him. She doesn’t know whether she wants to be Superwoman if she doesn’t have her powers, but she also feels guilty about returning to a normal life after having been Superwoman. Clark flies her over Metropolis, showing her the impact that Superwoman has had on the people there, including giant displays with her image on them and two young girls playing as Superwoman. Is he pushing her into accepting the role of Superwoman before she’s ready?

I really appreciated Perkins focusing on the friendship between Lana and Clark in this issue. It’s clear that he wants to be supportive, but he also wants to push her to be Superwoman again because he knows that that’s a role that she’s capable of filling. The internal conflict Lana has between living a normal life or being Superwoman is also thoroughly explored, until she comes to the conclusion that she’d feel guilty living a normal life after having had the experience of being Superwoman. Her actions make her a hero, not the powers or the costume.

The issue is very much a continuation of the previous arc, following the events with Atomic Skull and Maggie Sawyer and connecting them back to Lana’s story. But this issue was also a shift in direction, as Lana is now powerless and unable to be Superwoman in the same way she was before.

This is an emotional issue for Lana and that’s clearly shown through Segovia’s pencils. Her face is extremely expressive, highlighting her anger, confusion, or panic, and it’s clear in every panel exactly how she’s feeling. This complements the story extremely well and really adds to the emotion Perkins is providing with her words.

The page where Lana and Clark are flying over Metropolis is stunning: the shadows, the conflicting emotions on Lana’s face, and the signs with her image on them that really highlights her impact on Metropolis.

The colors are also impressive, and Lana’s hair really makes her stand out. It’s such a vibrant red, allowing the reader to easily pick her out, even when she’s not at the center of a panel. I really liked the different color palettes in Kansas and Metropolis at night. Kansas has bright stars in the sky that are easily seen behind Lana and Clark, while Metropolis is really focused on the bright lights of the city and the billboards, with barely a star to be seen. It really emphasizes the different places Lana and Clark have been, and it’s interesting that they can feel a sense of belonging to two completely different places.

Overall, I really enjoyed this issue! It continued the storyline from the previous arc, while really expanding on Lana’s internal conflict over being a hero or living a normal life. This was a great first issue for Perkins and I’m excited to see where she takes Lana next.