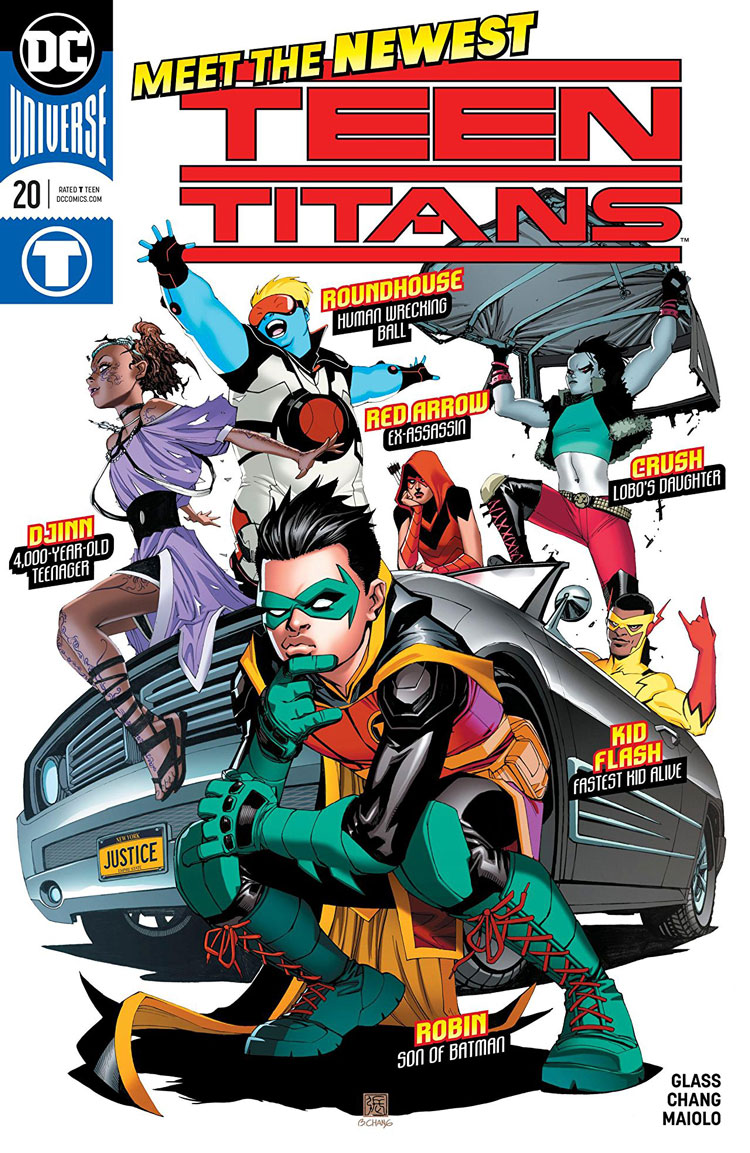 Damian and his new crew of Titans are out fighting crime in this latest installment of the Teen Titans!

I like the interactions between Wally and Emiko. Their personalities are nice foils for one another, creating some good banter. I also like that Emiko did decide to join after all. Her and Damian have very similar upbringings and problems, so I’m intrigued as to how deep their journeys will mirror one another or if one of them will go dark, showing a sharp contrast with the other.

Speaking of Robin, I like how Damian creates his team this time around. No more antisocial kidnappings for the boy wonder. With his character development in both the previous issues of the Teen Titans and his time with Jon in Super Sons, Damian should have more social skills and this minimal amount of tact. I’m glad Damian is shown legitimately asking people to join him and his campaign to reshape the crime fighting landscape for a new generation.

I like the changes in art between the present and flashbacks. The popart coloring of the flashbacks really distinguishes the two in an interesting.

I love the design for Crush. I like that she has the same punk sensibilities of her father as well as his thirst for chaos. Lobo was always a fun character, so I’m excited to see what his daughter will bring to the table.

Roundhouse is definitely a new character to me. I like some of his Beast Boy vibes and having a human wrecking ball isn’t bad to have in a situation either. His character design isn’t bad either. The character design for heroes is always slim and sleek or muscular, so it’s nice to see a change up with Roundhouse.

I love Djinn as a character. I love her mystical feel and the purples in her character design. I love how she has the same innate love of animals as Damian and they both sort of bond over that. I like how weirdly gentlemanly Damian is to her in the flashback and how chill they seem to be with one another.

Mercy Hall is probably the coolest Titans base I’ve seen in a while. I love the symbolism of the name, how within its grungy exterior lies a fantastic head quarters.

There’s something sincere about how Robin collected his group of misfits this time around. These aren’t the DC hand selected, always popular row of Teen Titans that everyone always loves. There are some new characters in the mix, and some that aren’t well known as being part of the team.

I think what I love most is that this is a team that Damian could probably relate to immensely more compared to the previous line up. These are kids with problems, who people wouldn’t expect to become heroes, who morals that wane at times, who need a team for redemption. These are Damian’s people.

If you haven’t been reading Teen Titans, you’re in luck because this is a great issue to jump into. There are very little ties to the last 19 issues. The big reveal is pretty fantastic too. What Damian does in this issue is both logical and one of the craziest things in the Teen Titans books I’ve read. I can’t wait to see what the repercussions are.