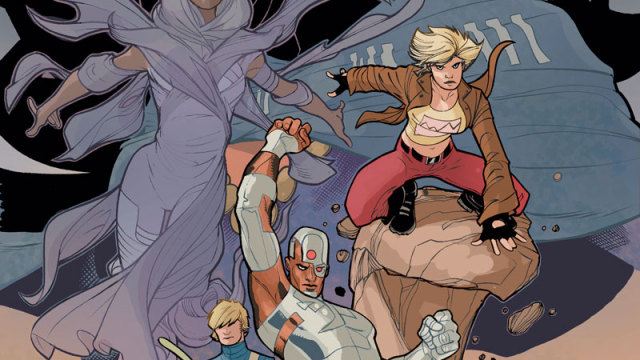 Four suburban high school kids suddenly develop super-powers. A Native American girl keeps seeing them in visions. And they all hear the call of an alien girl they’ve never met before. Something big and bad is happening to these teens, and when they discover the truth behind their connection, no one is going to be happy — especially their parents.

These are the new Teen Titans. This is Earth One. And the heroes within are some of the best versions of these characters written since the Wolfman/Perez originals.

The history of the Teen Titans stretches back 50 years this month, so it’s fitting that they are the third DC Comics concept to be explored in this brave new world of the Earth One graphic novels. Divorced from the concept of kid sidekicks, the Teen Titans here are all iterations of the classic line-up from the early 1980s, with the notable exclusion of the original Fab Five. Cyborg, Changeling, Raven, Starfire, Terra, and Jericho pepper these pages (along with notable appearances from another famous Silver Age super-team) to create a book that honors the heart of the original concept while creating something fresh and different.

In that sense, Teen Titans: Earth One exceeds efforts made by Superman’s and Batman’s Earth One iterations, because while those books made some dramatic shifts in details, they didn’t do much to reinvent the wheel of these characters. This is the clear advantage of writing for heroes that have a much less worldwide presence, and Lemire isn’t one to let that opportunity pass him by. In fact, the writer has done here what no other writer has done in the last 30 years: take the New Teen Titans and reengage the players in such a way as to reinvigorate — not retread — what makes them so great.

The clear stand-out among the cast is Raven, whose origin has been deftly recrafted to start and stop in Navajo legend and community. It’s a fresh take on the heroine, who has been through so many torturous iterations since the classic 1984 relaunch of the title, and one that just feels right on so many levels. Here, Raven is still the one with visions of her future friends, but rather than being the cause of their sorrow and the one in great need, she’s the potential savior that will bring them together. It breaks from the constant torture we see to varying degree in Raven’s history, and gives her an implied maturity that’s most welcome.

Of the remaining crew, Changeling is by far the most endearing and energetic, still imagined to be one of the youngest — but also now smartest — members of the team. Getting to see his initial transition from young, carefree (now Latino) son of adoptive gay parents — a fact that got me far more choked up than I would have expected — to classic green animal changing hero is one of the more delightful moments in the book. This is not to say there aren’t serious moments throughout, but there’s much less darkness in this volume overall than in any of the three chapters in the Earth One saga, so we’re left with an adventure book that is not the least bit silly or gory. It can easily be read by pre-teen all the way up to adult, making it the perfect bookstore sell in the modern YA targeted market. 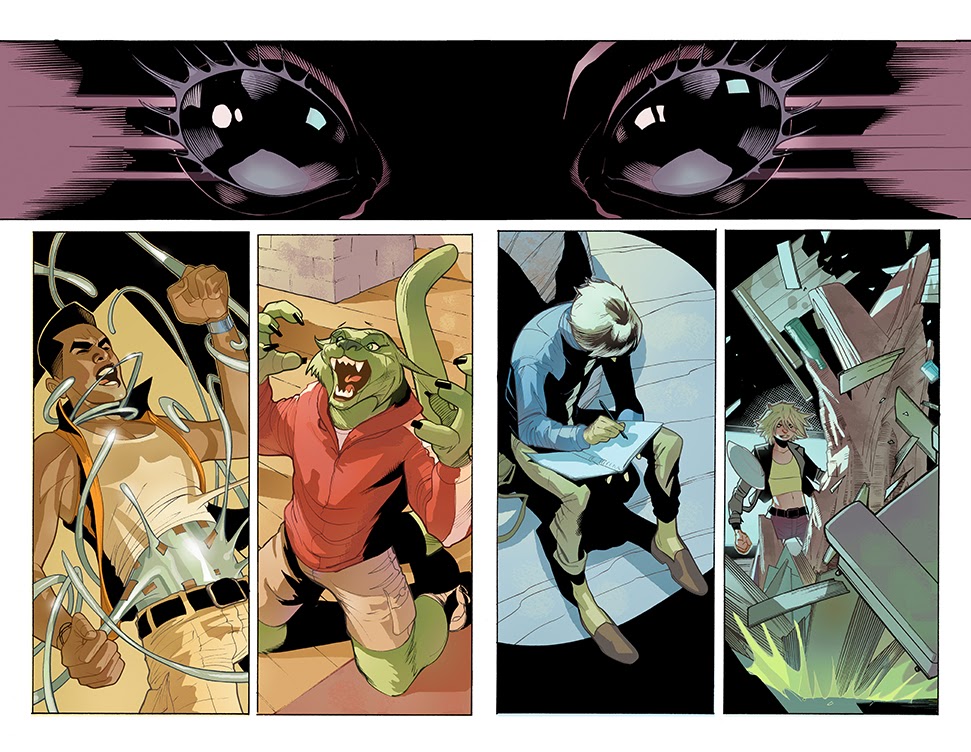 The art by Terry Dodson diverges quite nicely from some of the artist’s more bodacious and static work of the past. There’s a clear energy to his line work that reinforces so much of what it means to be a teenager, particularly one just discovering his or her powers. Raven’s redesign is absolutely gorgeous, and as the only character to appear in full costume in these pages, her pages are some of the most developed in the volume. Dodson deftly captures everything about the characters we would expect to find: Cyborg’s fear, Terra’s anger, Raven’s modesty, and Changeling’s humor — all with strong focus on facial expression and posture.

Everything about how the kids are drawn reinforces the drama of the age bracket and the exuberance (wanted or not) behind discovering you have powers. Even in Cyborg’s transformation, the most worrisome of the group, we see a dynamism of movement that keeps the reader turning the page in delight. The only fault in the process, it feels, is the use of two different inkers over the course of some 80 odd pages. It makes for a slightly negative comparison between cleaner finishes and a more sketched, fluid style, whereas one or the other would have felt far more exemplary on their own.

A re-envisioning of the teen hero that far exceeds any attempts at the Teen Titans over the past 20 years, Teen Titans: Earth One is the reboot I’ve been waiting for — one that respects my favorite incarnation without being a slave to its mythology. Lemire has built the beginning of a fantastic new story here. Volume 2 can’t come soon enough.