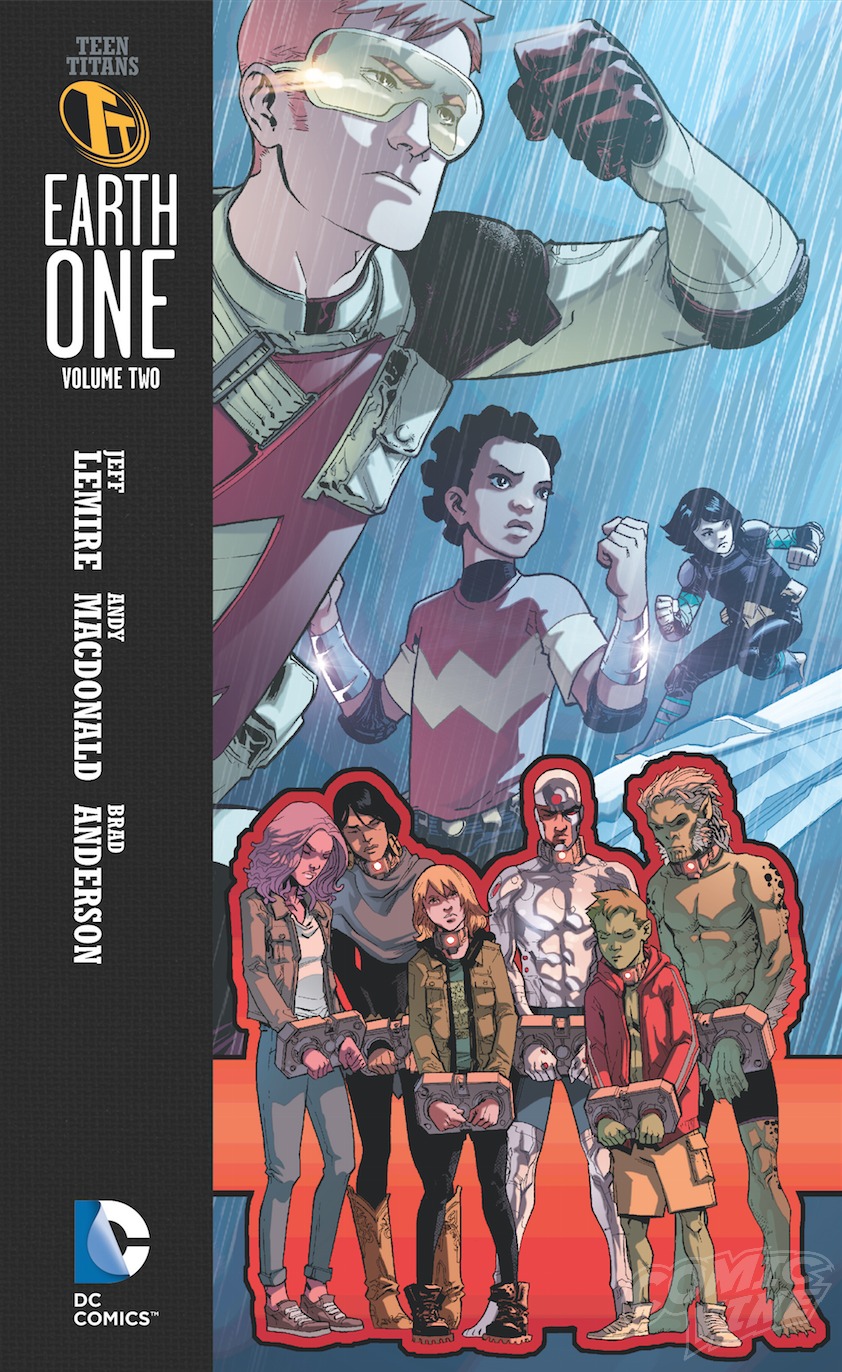 After escaping from their parents’ clutches, the Teen Titans — Cyborg, Terra, Changeling, and Tempest — are in disarray. Hungry, homeless, and in Cyborg’s case, suffering from his powers taking complete control of his body, the teens are going to be at a disadvantage when Slade Wilson shows up. And that’s not even accounting for an entirely separate group of Teen Titans — Wonder Girl, Impulse, and Kole — working for the big daddy of them all, the man behind the experiments, Niles Caulder.

Earth One is definitely a tricky-wicket. A few months ago, we saw what was probably the strongest homage to the origins of a character in Wonder Woman: Earth One that we’ve seen in the seven-book line so far. Whether the execution was to your taste or perceptions can certainly be debated, but Morrison and Paquette isolated something strong about early Wonder Woman and fractalized it out into a cohesive world you could deep dive into.

Teen Titans: Earth One doesn’t exactly have the same result, although I think it’s fair to say a lot of the theory behind the character choices and delivery come from the same process. Lemire and new artist Andy MacDonald (replacing Terry Dodson, who pencilled the first volume) definitely take the classic Wolfman-Perez Teen Titans — particularly the original creations of that run — and put them through a creative salad spinner. But what comes out isn’t exactly a distillation of their cores. It’s more fragments of their potential.

Lemire writes Earth One as if the Teen Titans are wholly original to the graphic novel, hanging only onto the idea that they are in counter-cultural opposition to the adult authority in their lives. And it’s no trouble that the characters aren’t sidekicks to the big names of the Earth One universe. That aspect of the team was immediately dismissed under Wolfman’s pen over 30 years ago.

But what the book is missing is any sense of who these individuals are. I don’t get Victor Stone from the ailing Cyborg. I don’t get the root of Gar Logan or Koriand’r from Changeling and Starfire. Their origins and motivations are so far flung from the now-classic heroes who stand aside Superman, Batman, and Wonder Woman, so as to be nearly unrecognizable.

The only improvement, in this case, is Raven, whose freshness in personality and motivation, with a lens of a Native American heritage living on reservation land with her grandfather, is such a delight. Her heroism — and subsequent inference of a romance with one of her teammates — just makes the character shine far above all the others. She nearly feels like the only one with a viable personality.

Overall, the volume feels a bit haphazard, a bit too reliant on external plot and not enough on what typically drives the alpha root of Teen Titans: personal drama. And to some extent, Andy MacDonald is at a serious disadvantage for it. While his pencils shine in the rare moments of close facial expressions and emotional interaction, they feel a bit unremarkable in action scenes or transition scenarios.

And interestingly enough, for a book with relatively little emotional development, there are also few big bombastic moments, and at the least, MacDonald might have benefitted from a few more. Seeing Impulse, Wonder Girl, and Kole jumping out of a helicopter right into the reader’s lap may not feel “Teen Titans” to me, but it definitely got my blood pumping and my admiration high. Sadly, there’s not much else that stands up to that in pomp and circumstance.

There’s no question MacDonald produced a clean, almost anime-style drawing style throughout most of the book, but the moments where the detail doesn’t match up hurt the OGN as a whole. And not getting to the root of the core concept in Lemire’s writing didn’t help either.

This may have been a well-executed teenage adventure story, but it’s not a Teen Titans story, really. And that’s a difficult path to take by comparison to the other three properties in the Earth One line. In this case, it’s just not paying off.