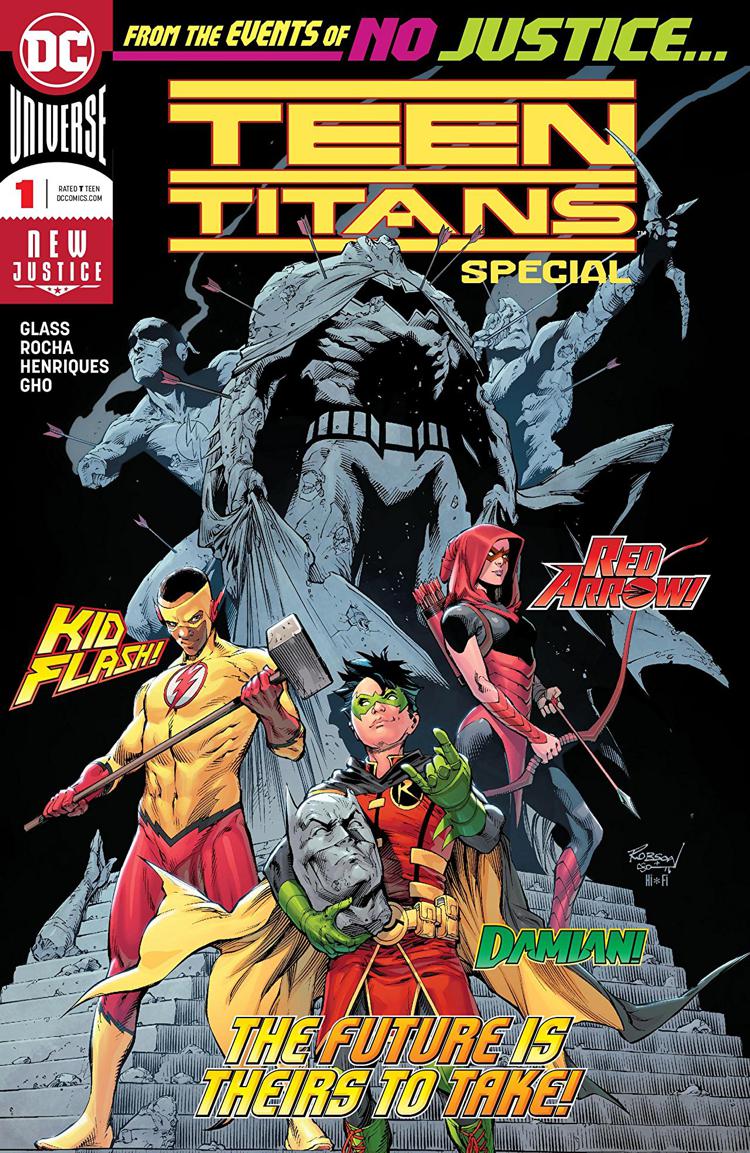 As young adults look to their elders for guidance, some see only a hindrance when the rules come crashing down on them. Peek into the lives of three rebellious teens in this issue of Teen Titans Special #1!

I find the way Glass sets up this issue to be intriguing. It’s a series of short stories about Damian Wayne, Emiko Queen, and Wally West, concluding with an epilogue giving a small glimpse into what’s to come in Teen Titans #20. I think the break down of the issue is smart, especially with the Damian bookends.

I find the overarching theme of how teen heroes with problematic pasts and heritages who struggle to find a way to do good becoming disillusioned with the ways they were taught to be better people by previous generations of heroes to be interesting and provides the perfect segue into a team with looser morals. I like how it’s about a younger generation questioning the precedence placed on them by an overarching society of adults who seem to constantly let them down and make them feel lesser.

The art is beautiful. There are particular panels that keep my attention. The brief moment of peace Damian has as he eats oxblood soup in a Lebanese restaurant, almost relaxed, a woman placing the bowl down warmly as he awaits the dish with nostalgic anticipation. The small smile Emiko has as she looks down at her black dress, placing it over her robe as if envisioning herself in it before wearing it. The moment the older Wally comes onto the crime scene to help the younger Wally, his hair sweeping valiantly from his speed, his grand demeanor enveloping the crowd as they see hope in him. These moments would not have stuck with me if not for the work of both Rocha and Henriques.

Gho’s coloring makes this issue stand out. These are dark characters with violent pasts and morals easily molded towards more sinister notions. This could have become a mush of grays and browns. However, Gho brings vibrancy to the page. Gho brings fantastical hues that lighten the scenes, even if heavy topics are discussed. Even in the night scenes, they don’t feel unneededly edgy. Gho brings much needed levity to the pages.

Leigh’s lettering is fantastic in this issue. I love the specific color palettes for each person’s thought bubbles. I like that you can just tell instantly who’s thinking, whether it be Robin, Kid Flash, or Red Arrow. I also like the fact that they all have and overarching color palette of yellow, orange, and red that compliments one another’s thought bubbles. It connects the three, making them feel like they would work well on a team together.

If you like Damian, Emiko, Wally, or just want to see a small glimpse of what’s to come in the Teen Titans, I’d recommend this special. It’s a fascinating glimpse into the lives of villain-like teen superheroes and an intriguing thesis statement for what’s to come.