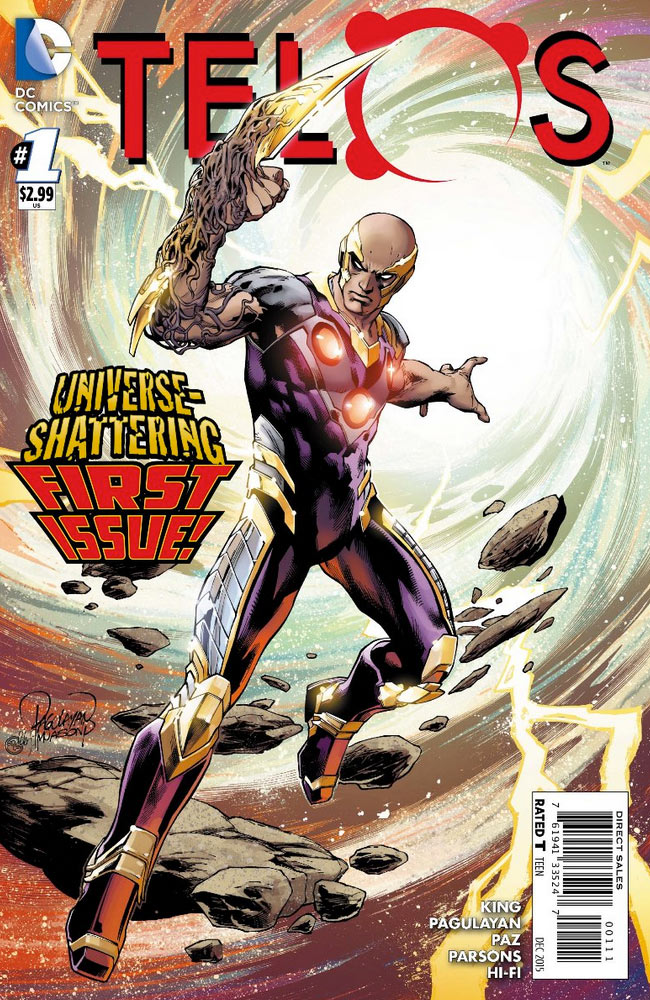 Telos is a man adrift. Brainiac has stolen his family away from him and hidden the memory of their location in an AI back-up at the center of the planet Colu. Only problem? Telos needs to go through the tyrant Computo to get to it.

Here’s the thing, guys. I didn’t really read Convergence past issue #0. Yes, I read all of the two issue mini-series and loved far more of them than I thought I would. But the main series? It just didn’t grab me and I let it go after issue #1. So, all I pretty much know is that Telos was the villain, maybe a pawn of Brainiac. Maybe he’s really a good guy? I don’t know. And this issue doesn’t really tell me.

It’s a problem, because King doesn’t explain much of anything here, seemingly relying on any readers coming in with that eight-issue mini-series from six months ago under their belt. There’s a lot of cues here to the history of the DC Universe that may or may not hold. Computo from the Legion of Super-Heroes, maybe created here by Brainiac instead of Brainiac 5. Validus is standing around. We see lots of versions of Brainiac. And not much of it really makes sense.

Telos himself is not particularly sympathetic, and not because he’s villainous or otherwise terrible, but because I really have no sense of what he’s lost. He mentions his family, but we never see them in flashback. We have no sense of his history. No clear understanding of how he came to this moment and only a brief allusion to a wild goose chase Brainiac sent him on. His powers don’t seem that clearly defined, although over the course of 20 pages we see electrical discharge, matter transformation, and brute strength.

What does work really well in this issue is the pencil art from Carlos Pagulayan, who presents a frenetic, but engaging battle between Telos and Brainiac. Every panel has a striking amount of detail to it, giving us a real sense of the characters’ mass and texture, especially in somewhat nebulous outer spaces. Bodies are well constructed and dynamic, avoiding any stiffness that can come with a sense of mass. Telos, in fact, feels classically super-heroic in stature, if not in outward behavior or dialogue.

Panels flow across the page to keep the pacing of the issue moving, and the visual storytelling here is some of Pagulayan’s best to date. Paz and Parsons both ink the work quite finely, capturing all the detail without overrendering any particular scene. It’s quite a beautifully done book, but I can’t make heads or tails of the story.

For a new title launch at issue #1, Telos unfortunately fails in its most basic mission: capture the reader’s interest with a solid foundation and get them off on the right foot to want to learn more. King clearly is relying on a readership that already has an investment in Telos’ journey, and time will tell whether that readership actually exists or not. Either way, this is a pretty gorgeous piece of work from Paguyalan and company. The question is, is great art enough to keep me coming back?