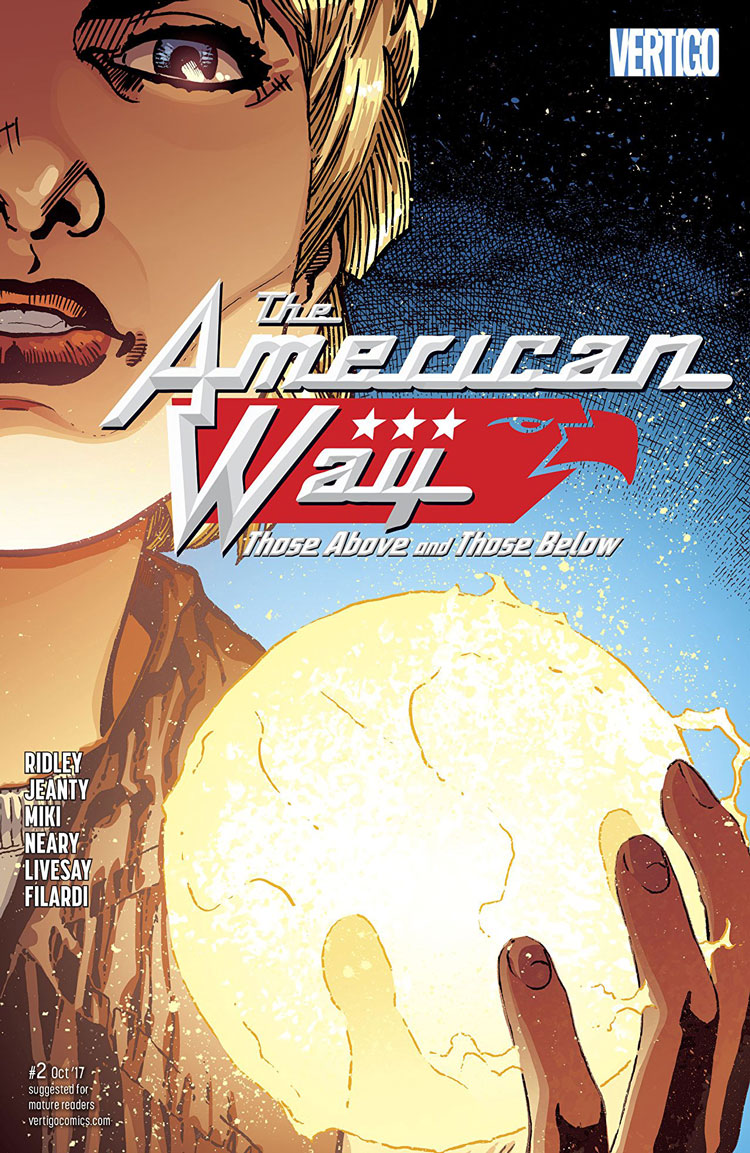 Our home is burning.

Jason is acquitted. Amber faces gut wrenching truth. Missy handles death and her sense of control. America still faces turmoil from coast to coast, and these former heroes still have to manage the personal and the political. As each of their stories inch forward, we become privy to their motivations amidst a country both literally and figuratively on fire.

The American Way: Those Above and Those Below continues to have emotional resonance between its politics and many events occurring today. Within the second issue, there are ties to events in America within the past few days that make this comic nearly prophetic, though it is set in the 1970s. However, this feeling also comes from the realization that the issues in this series never really left, they just got a new face.

From its first page, the second issue of Those Above and Those Below confronts us with the reality of what happens within power systems and structures as Jason is acquitted of his charges. This dilemma is apparent for him even through his steeled presence in court, recognizing that he has been used as a tool of the system and hedged against the desires and freedom of his community. His story is made more complex by the reality of who he saved and who he didn’t, as well as the respectability politics that put him at odds with the black people around him.

Through Amber, we find out that she and her group of radicals are not endeavoring to hurt others, but to damage the power structure that looms over them and disenfranchises others. As they take on the struggle of forceful change, we also find that those Amber loves have been subject to the whims others, even after risking their lives to save their country. Her substance use is revealed to come from the accumulation of pain throughout her life, a hauntingly similar image to the reason that many people deal with addiction in our world.

Missy’s place in the story deals with facing mortality and grasping power through defying odds. The jarring part of her narrative, however, comes from her decision to run for governor. She does this because she is forced to look death in the face, but also because she wants to save the world from “radicals” and “race riots.”

Running under a banner of ‘Heritage, Not Hate,’ Missy makes her declaration to the world. She is not so much like the overt racists introduced in the preceding issue. Her reasoning is calm, even if firmly enmeshed within white supremacy. She does not strike the chord of hundreds of white men saying they won’t be subjugated, but the white women who support them, including the 53% who saw fit to vote for a man who vocally campaigned on these ideas.

John Ridley continues to fashion an emotionally visceral story that looks at the complicated nature of humanity and social politics. As the story builds, there are some aspects of the narrative which are concerning. Jason’s presence as the state’s black man puts him in opposition to nearly every other black person present in the story, which sets up a structure where he could more easily be seen as the force of good as the ‘hero,’ though I also do not think he can be easily painted as the absolute morally right or just character either.

His feelings about Baltimore in flames are both justified and identical to what many white people have deemed ‘bad protest’ in the wake of Ferguson. It is no small matter to reconcile how Jason represents the reality of state sanctioned violence against black bodies and has a dedication to his home that almost puts uneasy order against justice.

With the addition of Missy, though, Jason’s politics are put into a different context. Amber almost serves as a bridge between these stories while still espousing important standpoints. Ridley’s use of these three characters gives context and complexity to the comic, as they each expose another layer of political meaning and how they intersect and exist independently.

Georges Jeanty embeds chaos into every panel through crowds, gunshots, and ending with fire and explosions. Such artistic elements are excellent parallels to the writing and I love how they move from the metaphor of flames to the literal representation of them. Missy’s segment of the story does not have the same physical presence of fire and violence, but it stands as an ironic and disheartening reflection of her platform’s representation of violence under the guise of legitimate politics. Jeanty creates a visual story that combines many different elements of political storytelling, whether this comes through symbols or specific events.

John Livesay, Danny Miki, and Paul Neary as inkers address the complex feelings through the story. There is no death of feelings to portray on any level, and the inkers for this story make sure that we experience exactly what we need to.

Nick Filardi steeps each page, already fashioned with flames of emotion, in realistic hues that bring the events of the comic closer to where we are. Muted ranges of colors embrace what we see in old photographs and give a temporal context to the events that unfold within each issue.

To have a comic like Those Above and Those Below is to be confronted with a reality that many people with rather deny. While the story of the comic takes place decades before now, it is remarkably close to events that we see on the news every day. This stomach punching story puts a lot of feelings and experiences on the table, helping us remember that we are all a part of a larger context and have a responsibility to do better for ourselves and those around us.