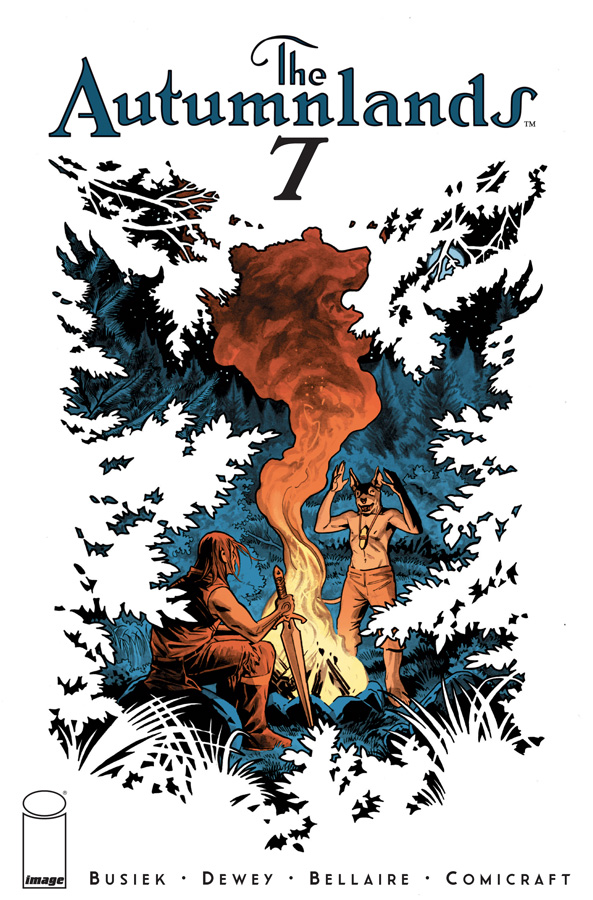 The Autumnlands has returned after a brief break and I’m happy to say it’s as strong as ever.

The story picks up very shortly after the epic conclusion of the first arc, with Dusty and the Champion’s fate unknown after the explosion. Thankfully, readers don’t have to wait long for their first interaction with one of the most entertaining duos in comics and the interactions between Dusty and the Champion in this issue are great. Busiek’s innocent Dusty is the perfect, lovable foil for the caustic, sarcastic Champion and the way he speaks in comparison to every other character in this series continues to entertain and delight me. He’s a heathen compared to these well mannered anthropomorphic magi, but he’s also the only one who can keep them alive which is one of the most entertaining parts of The Autumnlands. A new development in this issue certainly provides some intrigue going forward and the political side of this comic is just as entertaining as the interactions of these characters.

One of my favourite parts of this series has been the pacing, as Busiek and Dewey never feel like they are rushing things. The story unfolds at the pace it should, not sacrificing detail because of a page count or issue break. Pieces like the narrative “story book” style pages continue to make this comic feel unique and I’m glad they haven’t been sacrificed thus far. This is grand, epic fantasy and you can only get that by giving the characters, events and world room to breathe and Busiek and Dewey are doing a great job of that. Some may consider this issue to be on the “slow” side, but I would argue that isn’t the case at all and what we are really getting as readers is a wonderful lesson in fantasy storytelling from a gifted duo.

Speaking of gifted duos, another creative pairing on The Autumnlands is a force to be reckoned with and that is the team of Benjamin Dewey and Jordie Bellaire. Fantasy lives and dies by how well the world is built and how grand it feels and Dewey and Bellaire’s work excels at both. Dewey’s detailed pencils are fantastic whether they are focusing on a landscape or two characters in a discussion and the emotion he evokes from Dusty, in particular, is very impressive. Dewey is a skilled storyteller and his visuals are gripping. Bellaire’s colour work gives this world a richness and depth that elevates the artwork to a whole other level.

The Autumnlands #7 is a great start to the next arc of the series and these talented storytellers have me hooked on this world. As we learn more about this grand world I find myself more drawn in than ever. Busiek, Dewey and Bellaire are crafting something special here and The Autumnlands is a must read for fantasy fans, comic fans and anyone who enjoys a grand tale.