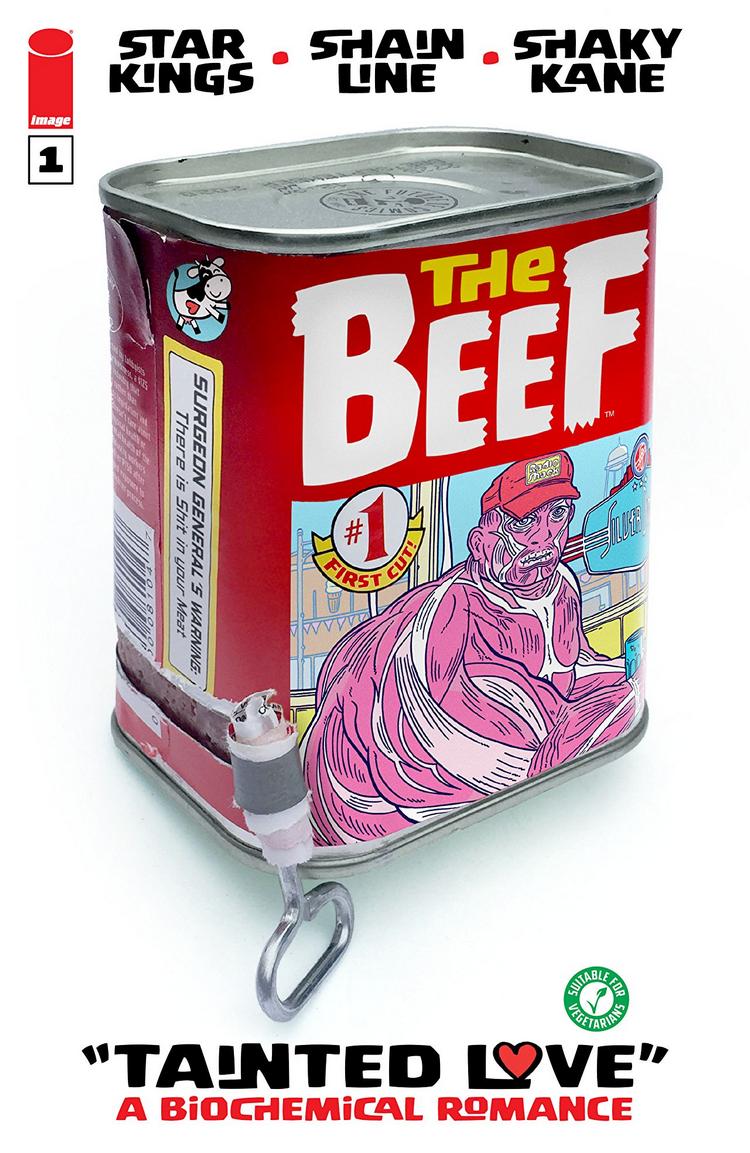 Calling Shaky Kane an artist feels reductive in ways it doesn’t with other comic book figures. The man is perhaps more accurately an aesthetic black hole, his style so powerful it warps everything around it, no matter who he’s collaborating with. In Bulletproof Coffin, Kane’s seminal work with David Hine, the backmatter of one issue offers a fictional quote about Kane and Hine’s process that glibly riffs on the relationship between Jack Kirby and Stan Lee but feels accurate to Kane’s collaborations: “I draw the comics, I told him. The kids buy comics for the pictures. You fill up the word balloons. This ain’t literature. Just make sure you spell the words right.”

The surly declaration that comics ain’t literature might ruffle the feathers of folks who exert incredible amounts of energy trying to get the attention of the literati— the types of people who lose their shit about Art Spiegelman not being in the MET— but Kane is right, comics aren’t literature, they’re their own distinct medium. Kane’s work has a number of consistent traits but this anti-literati stance is one of the most recognizable and admirable. And Kane’s recently released “biochemical romance” The Beef is as far from literature as you can get.

Nonetheless, The Beef credits not one but two writers. The first is Elephantmen creator Richard Starkings while the other is Tyler Shainline, previously best known as Image’s print manager. Discerning what the separation of duties is on a comic is always difficult but with Kane titles it’s nearly impossible because his style bleeds over into the structure, tone and narrative. Tim Goodyear even brought this up in an interview with Kane in 2016 at The Comics Journal, asking about the “Shakyverse” and how it “transcends comics,” prompting Kane to agree, stating “There’s a certain familiarity to everything I produce. It’s sort of populated or for want of a better word, furnished by the same stylistic tropes.”

The Beef takes one of Kane’s favorite visuals— burgers— and stretches them into an entire concept. The story centers on Chuck (get it?), a blonde-haired, blue-eyed, all-American male who lives, breathes and kills beef. Chuck works at a meat processing plant in the aptly named Mudsville, firing bolts into the skull of cattle and then slaughtering them. When he’s not doing that he’s hanging out at a fast food spot called The Beef, where the burgers come coated in “delicious excitotoxins” and amino acids that are “known to cause severe central nervous system distress and brain damage” when consumed in large enough quantities.

For Chuck, The Beef is a place of peace, except when “K-Bob” and “G-Row,” the bullies who tormented him as a teen and happen to be the grandsons of his boss, intrude. But Kane, Starkings and Shainline give plenty of indication that The Beef, and Chuck’s job, are about to be the root of a whole new world of horror for him, one that’s set in to motion by the heinous behavior of the bullies.

You might suspect there’s not really a lot going on with this story and you would be correct. Starkins and Shainline do spell the words in the balloons right but the words in those balloons are all kinds of ugly and not in the usual Shakyverse kind of way. Chuck’s enemies are all thoroughly repellent, eager to engage in homophobic antagonism and vile misogyny. Chuck and his friends, be they the childhood friends or the Hispanic woman he admires from afar, are basically good people but they’re such thin characters they may as well be scenery. The plot is similarly shallow, it exists merely to allow Kane to establish this weird little cow town before it and Chuck face the true strangeness to come.

And yet the simple truth is that Kane is an artist who enlivens even the most boring narratives simply by being himself. Kane’s aesthetic is a Troma melodrama, intensely visceral and bizarre yet quaint, nostalgic and just realistic enough to feel somehow true to life. And Mudsville is the perfect vehicle for that contradictory aesthetic, strange not in the Lynchian sense but like a fusion of the hollowed out industrial towns John Waters and Todd Solondz so often obsess over. The blocky bodies Kane loves to give his heroes and villains alike make perfect sense in a town where beefiness is next to godliness, as do the American furnishings and hot rod candy color palette Kane fills most of his work with.

Still, Starkings and Shainline don’t quite gel with Kane the way Hine does. In particular, Starkings and Shainline’s attempts to juxtapose the small town purity of Mudsville’s regular townsfolk with the sheer nastiness of their richest citizens come across as juvenile at best, something Hine managed to avoid in Bulletproof Coffin despite man-child nostalgia being one of its dominant themes. The primary difference between the two is that Bulletproof Coffin firmly established the perspective of its lead character, making it easier to understand and gauge his reactions to any given situation. Chuck is more or less raw meat, unseasoned and lacking personality, only coming to life in reactions, devoid of motive and character.

The Beef’s debut issue also makes the mistake of letting exposition and writerly flourishes— like the repetition of certain lines between shifts in time— get in the way of moving the plot forward so Shaky Kane can do his thing, stretching out conflict with the bullies far longer than necessary in order to delay the freaky pay off of the ending. That does at least indicate that the next issue will be the real vehicle for Kane’s talents as well as a better window into who or what Chuck even is. But for now, The Beef is undercooked.