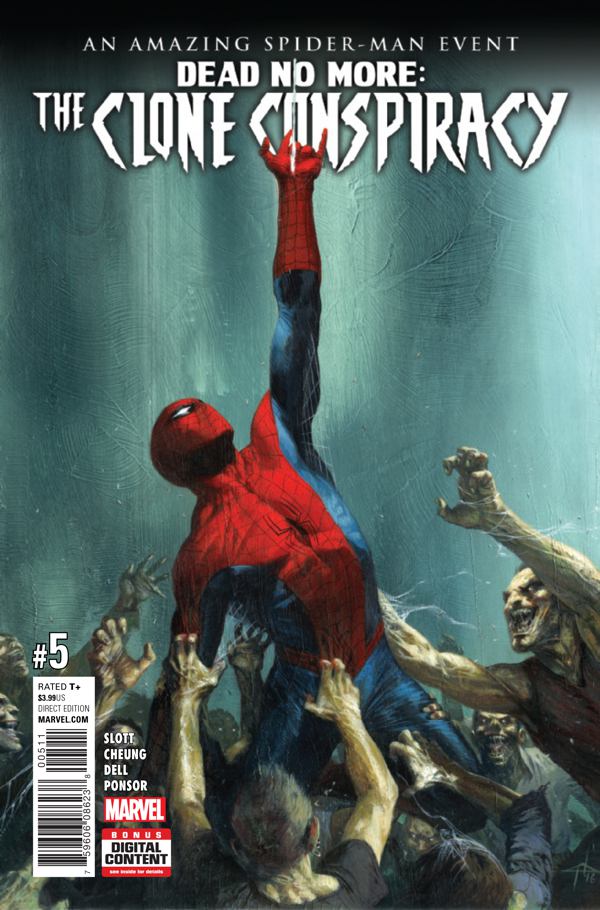 SPOILER WARNING: There be spoilers ahead, turn back now if you are allergic to spoilers.

Wrapping up the tale of the Jackal and his army of clones, The Clone Conspiracy #5 closes up the main plotline, teases out a few threads, and leaves a whole lot open-ended for Slott or other writers to revisit in the near future. The Jackal, sensing his endeavors were nearing an end activated an audio signal that jumpstarted the decay process for the clones.

In the thrall of a spreading Carrion virus, Jackal’s New U company is reaching out to threaten the world. Spider-Man and his amazing friends, including at least two Gwen Stacys and a couple other Spider-folk and allies, try to shut it all done, counteract the signal’s destructive tone, and contain the multitude of regenerated foes. Which is quite an awful lot for Dan Slott to try and fit into the twenty pages of story in The Clone Conspiracy #5.

Slott does fit in some emotional moments, but he simply doesn’t have the real estate available to make those moments anything more powerful than just moments. Entire issues could be devoted to the Lizard’s quest to save his family, the battle between Doctor Octopus and the Jackal, or the hasty departure made by Spidey’s foes. Sure, those will most likely play out over the next few months (or possibly even years) in Amazing Spider-Man, but the lack of closure fails to provide a substantial payoff for The Clone Conspiracy #5.

At the very least, this book looks pretty. Jim Cheung draws a nice, compact summary of Spider-Man’s existence in these twenty pages, from the Rhino to the Prowler, Gwen and Captain Stacy, Spider-Gwen and Silk. Many of the panels are horizontal, giving The Clone Conspiracy #5 a bigscreen feel throughout. The trio of inkers (Cheung included with John Dell and Jay Leisten) provides consistent finishes to Cheung’s art, and Justin Ponsor helps seal the deal by coloring the issue. Ponsor gets a couple shortcuts, as red emergency lights overpower all of the other coloring in scenes within the Jackal’s facility. Otherwise, Ponsor hits the notes as prescribed, with Spider-Man vibrantly leaping through Cheung’s drawings and his mask’s lenses glowing out of the shadows.

Joe Caramagna’s lettering is everything an event comic need: bold and dynamic, descriptive and conversational. There are shouts of agony, betrayal, and confrontation, all of which telegraph the tone of the scenes to the readers quite nicely. Cheung packs a lot of detail into his panels, but Caramagna works well with the art, never obscuring, and frequently enhancing.

While there is an upbeat moment to finish of The Clone Conspiracy #5, there really isn’t a satisfying conclusion. This doesn’t feel like an event that needed its own series, save for the fact that Jim Cheung is not always available for a monthly assignment. I expected more than I got out of this entire series, and this final issue provides a strong example of what that means, with so much that could have happened being pushed out to later dates and future stories. I don’t think The Clone Conspiracy should have been any longer, but I do think it could have been more complete.