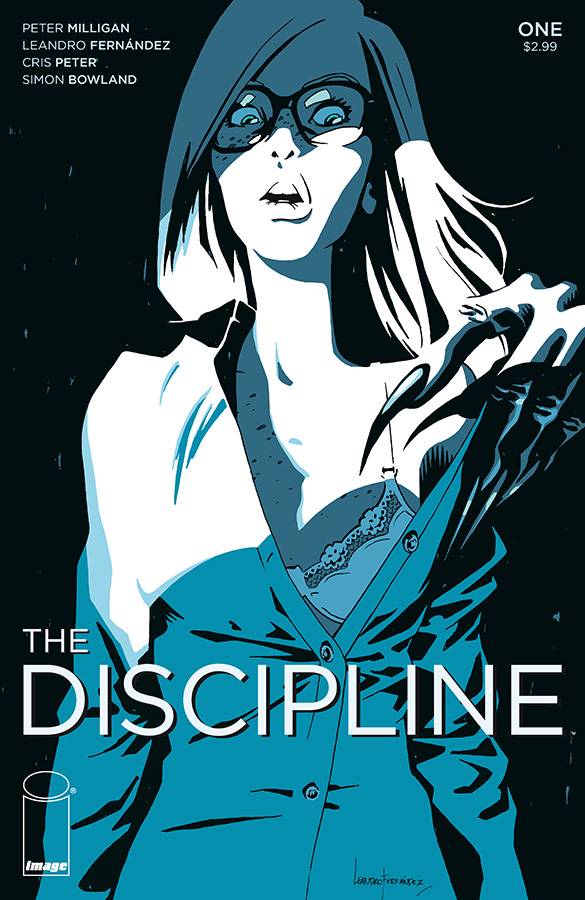 Melissa is a 23 year-old woman dealing with trying to support her impoverished family and facing a marriage that is far less thrilling than what she desires. After she meets Orlando, whose motives are unknown, her world begins to spiral into the contemplation of an affair amidst her unfulfilling life. Melissa decides to follow through as things take a turn and a monstrous visage sends her life down a spiral she didn’t expect.

The Discipline #1 opens with a monstrously and sexually charged couple of pages that frame the rest of the issue. The first few panels were jarring in that they were unexpected, but I appreciated the presence of sexuality. While I feel it is important to discuss or convey sexuality openly, my point of contention is how these scenes play out.

Through the issue there are a few pages that felt uncomfortable. There are coercive and unsettling sexual images throughout The Discipline #1. At every point, Orlando seems to control the sexual narrative, initiated by nonconsensual sexual contact. When Melissa attempts to have sex with him, he insists that they wait, and by the time they get closer to being sexual, Melissa is put in a situation where she is captive. What bothers me is that his behavior is seen as assaultive. Instead, Orlando is portrayed as intriguing and enticing. The idea of sex as a means to an end and the framing of the sexuality in this issue are not a good mix, and I feel they could have been handled differently. Orlando even has some creepy lines that make the situation feel much more manipulative and sinister.

Melissa as a protagonist feels rather idealistic and unbelievable, as she is young, 23, married to a millionaire husband and formerly had a high paying job. In the context of my previous concerns, Melissa’s lack of fulfillment in her marriage feels odd, and reminds me of the trope of the successful but empty woman in romantic comedies, cured by sex from the free spirited and unencumbered man, except with monsters.

Peter Milligan manages to set up some interesting story and plot elements for our main character, as she seems to have come from an impoverished background. I like these themes because they can provide an interesting framework for how protagonists handle various circumstances. Through the issue, Milligan builds an intrigue that leaves me somewhat curious, as there is obviously a lore behind all of the events of the story thus far. I’d like to see what all entails this backstory, what the Discipline is, and to what extent monsters and horror play a role.

This inaugural issue of The Discipline feels murky and dark, clouded by the shadows of a metropolis. Leandro Fernandez and Cris Peter make such an ominous and rather grim atmosphere that propels the story. There are some excellent uses of shadow throughout the issue, and the fully illuminated scenes still convey a rather boggy sensation. Muted colors amp up the eerie and rather dismal feel of the story. Given the nature of the story, these visuals are a needed touch that shroud each page in mystery.

Without future issues or a more complete story, it’s hard to fully gauge The Discipline #1, but regardless I would exercise caution with the issue’s framing. Through the art we catch glimpses of the horror and occult themes, but in execution the story comes off as creepy and exploitative. I hope that the series departs from this tone, as it makes reading uncomfortable and reminds me of changes that the comic industry has needed to make for decades regarding the relationship to women, sex, and assault.