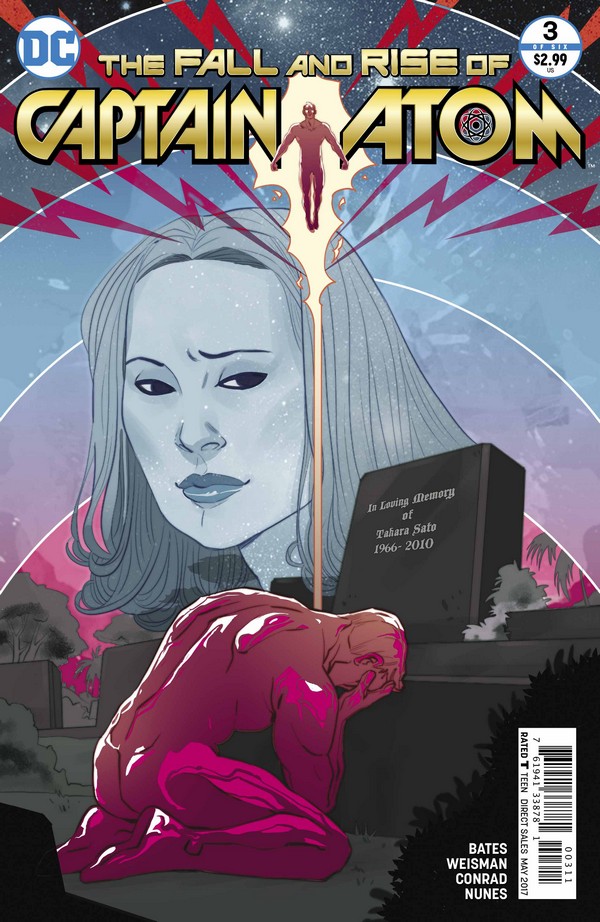 Back in the present, Captain Atom tries to put together the pieces of his twice-shattered life. But General Eiling has other plans and attempts to draft him into Operation Resurgence!

This issue continues the saga of Captain Atom, who was zapped into the past from 2012 in the first issue, lived for five years in the Nineties in the second issue, and now finds himself transported to the present, 2017. He’s discovered by Doctor Megala, who fills him in on what’s been going on, and General Eiling, who schemes to manipulate Nate to put him under his thumb once again.

For me, the experience of reconstructing the premise of the first issue of the 1987 Captain Atom series hasn’t been as rewarding as I’d hoped. Three issues in and we’re now at roughly the place the 1987 series was at the end of the first issue. In the meantime, this issue has a lot of backstory, a lot of tech talk, a lot of explanation, and not a lot of things happening. We don’t get much insight into Nate’s inner life, but we do get a lot of Doctor Megala explaining the comic book science of how Nate went backwards-then-forwards in time.

On the other hand, the voices of the characters feel spot on. Eiling is somewhat more subtle than he’s typically been portrayed lately, attempting to coax and connive before going for the jugular. Adam feels more human and grounded, and Megala more sympathetic. This issue is entertaining enough to read, even as it feels like a retread of a twenty-year-old comic.

That said, this comic makes up for its slower-than-necessary plot with gorgeous art. The particular attention paid to Captain Atom’s shiny musculature is well-appreciated, and the cosmic explosions and rough painted backgrounds are a perfect marriage of Will Conrad’s art to Ivan Nunes’s colors. There’s a particular panel of Captain Atom being blown up by an array of missiles that has a certain ethereal beauty to it.

All in all, The Fall and Rise of Captain Atom #3 is a beautiful comic to look at in which not enough happens. Hopefully future issues will pick up the pace, or at least give us a better exploration of Captain Atom as a character.