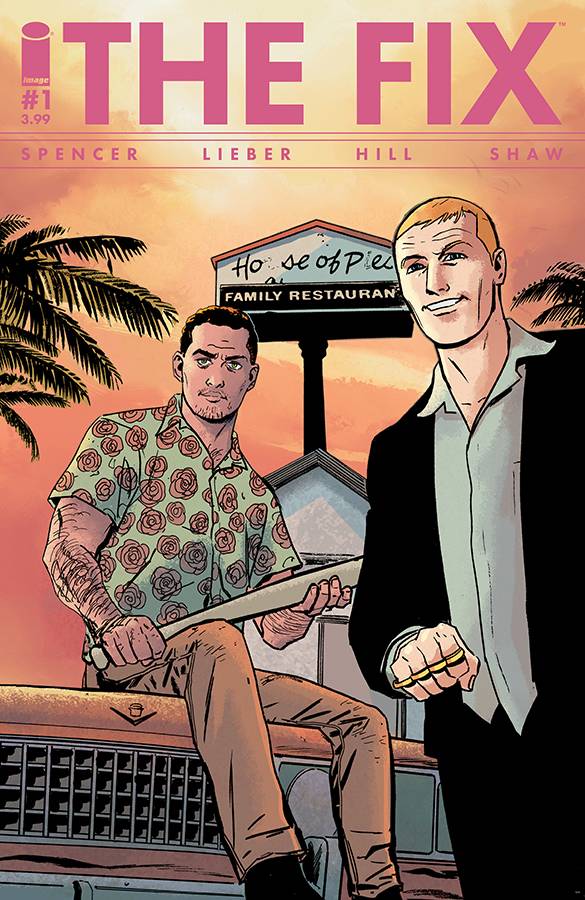 The Fix #1, a highly anticipated Image comic from the creators that brought us the wonderful Superior Foes of Spider-Man, Nick Spencer and Steve Lieber dropped this week and the world shook. THIS is the books to put all buddy cop books to shame. And buddy criminal books. Maybe just buddy books in general.

So, cryptic praise and all aside, here’s the stitch with The Fix. This first issue follows two cops (and that’s using the word lightly), Rory and Mac, as they stampede all over the criminal underworld, but being, well, criminals themselves. From front to back, this is a books that goes from bad to worse, all while getting better and better in terms of story-telling. The debauchery that landed itself on these pages unfolds to reveal a massive web of corrupt police inside a massively messed up society, and by book’s end, Rory and Mac have dug themselves a grave halfway to hell.

Truth is, I’m conflicted about this. On one hand, I feel like this story takes the notion of corrupt and brutal cops to an unforgivable level. The cruel behavior by the leading characters shows little regard for human life and an idolatry of some serious depravity. The way that this book is written, it almost takes the subject matter a little too lightly. However, this is when I try to give books the benefit of the doubt. Nick Spencer is a highly political writer, one that I would sincerely hope doesn’t actually take the subject of beat-down cops without regard for the difficult subject matter, especially considering the current climate regarding police/citizen relationships.  What this book does do, however, is take the usual funny-cop trope and paint the picture that the archetypal police officer can be more crooked than imaginable. This is one of the few times that my position on the quality of this story is based in the direction I think it’s taking. And that direction? That this opening was so sensationally scripted to pull readers in, to hopefully have a really, really heavy-handed punchline that takes a generally tropic story to places that impact readership positively.

The nature of the story aside, I really enjoyed the writing in this opening issue. It’s a bit text heavy, but I found myself engrossed in the story being told. The narration and dialogue had a smooth cadence to it. Though the humor was a little low-brow, and not quite as charming as I usually like, it certainly served it’s purpose to make you dislike the main characters for the purpose of progressing the story. You now the author has done his job when you’re silently rooting for the drug sniffing dog over everyone else in the story, even after spending 40 pages with them.

Steve Lieber has truly outdone himself on art. Every panel is a visual feast, providing the reader with some of the best body language-riddled illustrations a consumer could ask for. Everything is fine tuned in this issue, from facial expressions, to wonderfully captured action shots. The backgrounds are gorgeous and the entire feel of this book is on point in every frame. Lieber’s tone keeps the mood light so that you know not to take any one thing too seriously, and it’s clear why Spencer collaborates with him so well. Lieber also works with the other artists on this book wonderfully, with Ryan Hill’s colors making this book dazzle. The color palette is just the right shade to keep the tone up, while also showing off the slightly darker world being created here. Finally, Nic J. Shaw cannot go without commendation for his lettering. This book is a massive undertaking, as the story is heavy on dialogue and narration. Yet, he managed to fit every word onto the page in a way that seamlessly integrated the omniscient voice with the story, something that could not have been easy to accomplish.

While, even after writing these thoughts down, I’m still conflicted about the general narrative of the story, I trust in these creators to bring it around to a meaningful point that doesn’t miss the mark.