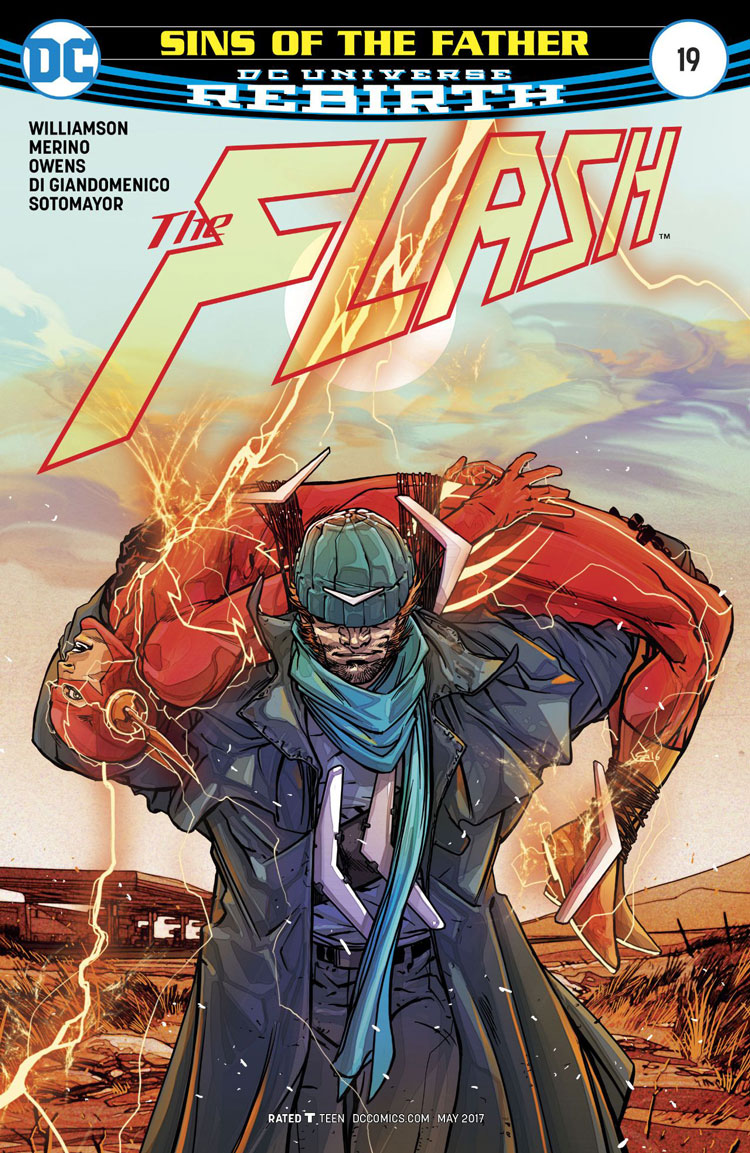 Flash and Kid Flash are forced to work with Boomerang to escape their villainous captors, and Kid Flash is still trying to find information about his father’s whereabouts.

The issue opens with Flash, Kid Flash, and Captain Boomerang in a bind, as they’re literally tied to poles and cannot escape. Digger provides an interesting idea for the villains, setting Barry free to run while they have the opportunity to shoot at him. And they agree, tying Digger to Barry and setting them running, threatening Wally’s life if they don’t.

Wally, however, doesn’t like being used as blackmail, and is able to escape by using his inability to phase through objects to his advantage. Kid Flash is extremely resourceful, and even though he’s not able to solve problems in the way that Barry might, he’s able to think of a creative solution to free himself, rather than wait on his mentor to rescue him. Then, he swipes Digger’s boomerang from the baddie who’d stolen it, and uses it to take out all of their weapons. Again, while this might not be a tactic that Barry would use or teach, Wally shows that he’s capable of solving problems both with and without his speed and is a more than capable hero in his own right.

With the bad guys defeated, Digger is picked up by Waller’s people to be returned to the Suicide Squad’s home base. But before he goes, he finally brings Wally closure and tells him what happened to his father, Daniel West. On a mission for the Squad, he went to retrieve a bomb that would have killed many children, but died in the process, dying a hero.

Wally, understandably upset, races off and Barry follows him. Kid Flash feels like Flash can’t understand how he’s feeling, only for Flash to finally reveal his identity as Barry Allen and talk to Wally about his own mother’s death. The moment is elevated by the pencils, the emphasis on Barry and Wally in the desolate scene around them, emotionally and physically far from everyone else. The colors also add to the scene, with the vibrant reds and yellows of the lightning crackling around them as they talk, adding a dynamic energy that feels like it could jump off the page.

The moment ends with Wally asking if Barry had told Iris about his identity. Understandably, Wally doesn’t think that keeping secrets from a loved one is remotely useful, having been kept in the dark about his father’s identity for most of his life. He also fights back against the secret identity trope, telling Barry that if he really cared for Iris, he wouldn’t be hiding such an important part of his life.

The issue ends with the return of a very prominent Flash villain that sets up for the Batman/Flash crossover, and teases very interesting events to come.

Merino and Di Giandomenico’s pencils create an energy around Barry and Wally, especially when they’re running, creating a real sense of motion and speed. Digger’s facial expressions, in particular, really stand out as well, as he goes from smarmy to panicked to apologetic. Sotomayor’s colors emphasize the bleakness of the desert, and how removed the events of this issue are from civilization. The bright yellows and reds of Flash and Kid Flash cause them to really pop from the bleak desert setting and differentiates them from the equally bland colors of the villains and their henchman.

The Flash #19 delivers on the emotional identity reveal that’s been a long time coming, and finally gives Wally some closure about what happened to his father. The issue balances between solving the villain issue and the emotional payoff, showing how close Barry and Wally have become in such a short time, and the respect Digger, one of his villains, has for him.