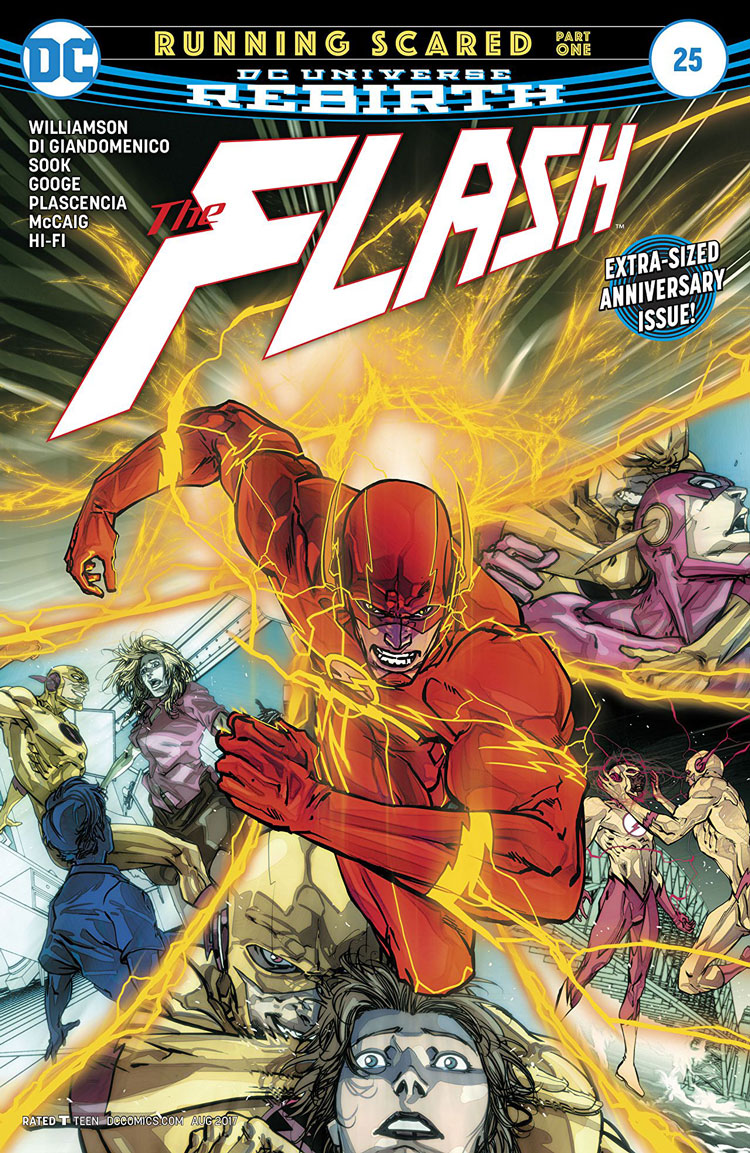 The Reverse Flash epic you didn’t know you wanted is here. The two issue prelude that was The Flash #23 and #24 — and by that measure, parts of “The Button” crossover — have prepared us for the this special (and it is!) anniversary issue that jump starts this epic Flash story that doesn’t let go until the final page.

All of Barry Allen’s life has come down to some constant points: The death of his mother and being struck by lightning in his lab. Eobard Thawne from the 25th Century killed Barry’s mother when he was a boy and that’s haunted him since.

Now in what seems to be a final battle of sorts brewing between positive and negative forces, Barry races to the 25th Century to confront Eobard but before that, we’re introduced or reintroduced to “The Dastardly Origin of Eobard Thawne” and the inclusion of different artists and colorists is needed for Williamson’s almost Shakespearean first chapter.

Williamson takes us back to the early days of Barry’s career when he first arrives to the 25th Century and it’s a turning point for Barry and Eobard and as the saying goes, “Never meet your heroes”. Googe opens up the flashback with a bright eyed and warm introduction of the two future rivals that quickly turns sour.

Williamson doesn’t waste time or panels when it comes to setting up the two central players in their extensive history, leaving some key events of their battles into window sized panels, not being a slave to setting up why you hate or feel sorry for Eobard… because that comes later.

The main art comes from DiGiandomenico who’s been making magic on The Flash since Rebirth started and he continues his work here. His entrance to the 25th Century an opposite parallel to Googe’s sunnier and optimistic rendition of a once happier 25th Century.

Plasencia and DiGiandomenico colors and art crackle with energy as Barry is surrounded with yellow Speed Force lightning and shines in the dreary dark future. The trail of speed zooming through panels continue the visual style that makes The Flash special as a comic itself.

The Flash Museum that serves as the battleground has two purposes… we’re treated to easter eggs and cameos throughout the Flash’s history and as a special anniversary issue we see how far Barry has come, we even see panels from two issues ago hung up! Eobard shows himself at last and in true villain nature, monologues his piece of mind to Barry and Sook gives us the best looking art on Flash I’ve ever laid eyes on.

Sook is the third artist and watching a good man turn bad has never looked better, it feels like a classic origin made new under his art. Reverse Flash was a fan turned misguided figure turned bitter because of his perception of what the Flash himself is. He wanted to feel special, to feel like the hard work he put in was for him and him alone.

The birth of Reverse Flash was born out of hate, jealously, and misconceptions of what Heroes mean once we really get to know them. Williamson writes the ex-friend Eobard with the right amount of snark and sinister as time progresses and conversations runs short between the two.

DiGiandomenico and Plasencia make their pages erupt with dynamic panels and color wherever they go and this is no different. Barry and Eobard on the same page radiate yellow and red energy and it’s anyone’s guess what the last page means for the future of both The Flash and Barry Allen.

The Flash #25 is a triumph for the character and his history. The various artists, colorists, and letterers exceeded their work and created a three part anniversary issue that does justice to both Hero and Villain with no signs of the finish line.

If you’re reading The Flash for the CW Show, because you love Speedsters, or you’ve been following the adventures of Barry Allen for a long time now… you need to have this issue in your possession because it’s a victory for everyone involved and it has one of the most hard boiling rivalries in comics you can’t help but keep up with.