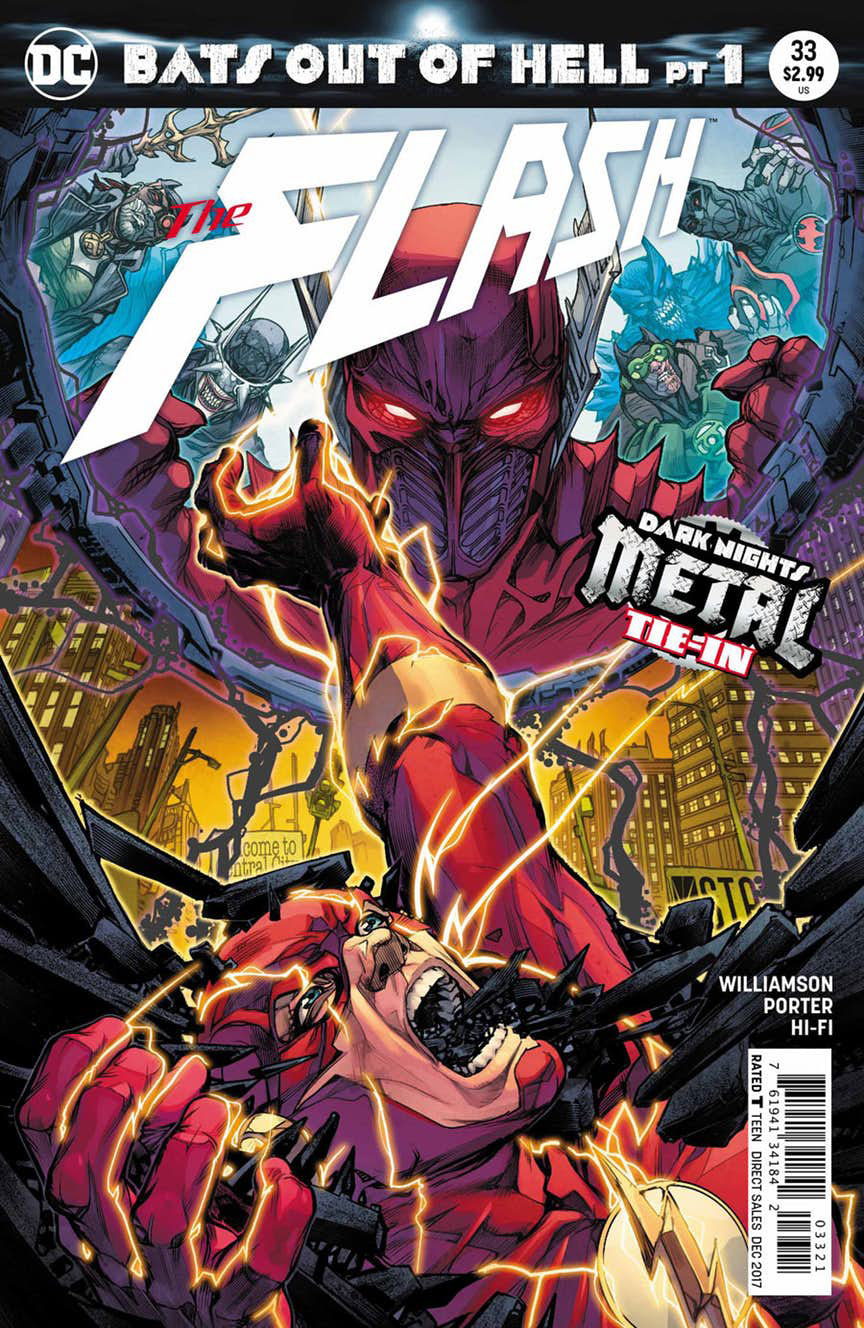 The Flash #33 kicks off the “Bats Out of Hell” crossover-within-a-crossover and brings Barry Allen even farther into the Dark Nights: Metal madness. Written by Joshua Williamson, drawn by Howard Porter, colored by Hi-Fi and lettered by Steve Wands, The Flash #33 reads more like a Justice League story told from Flash’s point of view than as a Flash story.

And that’s not a bad thing whatsoever.

Williamson seeds this story with enough goings-on from the regular run of The Flash that regular readers need not feel shortchanged, but it isn’t mired in the minutiae of the current events. This is a Metal tie-in, loud and clear. As the launching point for the “Bats Out of Hell” story, it falls on Williamson to succinctly present the tale to this point, emphasize the characters’ roles, and, since this is The Flash #33, center it all on Barry Allen. He hits those notes, and gives readers reason to stick with the story, the event, and this title.

Characters zip through this comic almost as quickly as the Flash himself, with over a dozen characters and a handful of locations packed into a twenty-page comic. Among those inclusions are intriguing vignettes to other action, splitting them all off from the main action of Flash’s efforts to study the cosmic tuning tower.

All of that plays into Howard Porter’s strengths. Inking himself, Porter doesn’t draw a page filled with panels; he draws spreads filled with moments. Every choice he makes times beautifully from the previous and into the next, and each spread is critically crafted to be balanced and organic, with ample access for Hi-Fi’s colors and acrobatic page assembly to accommodate Steve Wands’ letters.

The visual aspect of The Flash #33 is impressive to say the least, and more than once I had to double-check to ensure this was a standard length comic.

Beyond that, every panel is PACKED with detail, whether it’s the demolished Big Belly Burger and C. C. Jitters mixed in with mangled signs for Manapul, Booth, and Kolins when Barry arrives in Central City or the meticulous rendering of every scale on Aquaman’s uniform, Porter spares no detail.

The energy in each panel is as much drawn into and around what the Flash is doing as it is Porter’s enthusiasm taking shape. He’s clearly having fun doing this, and it shows in his work, which is among the best in his career here in The Flash #33.

Love it or not, buying all the tie-ins or skipping them, there’s simply no denying the impact Dark Nights: Metal is having on the DC Universe and the inspired jumpstart it has delivered to the creators working on DC Comics right now. Williamson, Porter, Hi-Fi, and Wands all submit strong in individual efforts that meld nicely into a stunning team accomplishment.

This is easily one of the strongest event tie-ins I’ve read in quite awhile, able to stand on its own (for readers who avoid or trade wait), run alongside the main event, or coalesce nicely into the flow of this regular series. I’m hoping we get a little more Metal from Porter and pals.