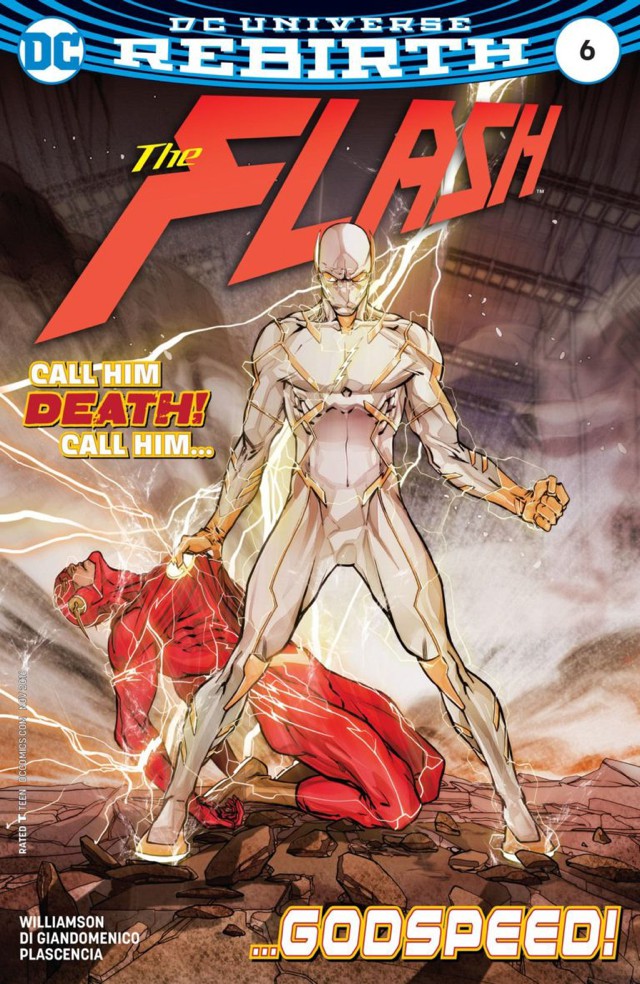 Part 6 of this stunning opening arc of The Flash answers the big question of just who Godspeed is and it changes the course of the series — and adds further wrinkles to what we thought we knew about the Speed Force Storm and those effected by it.

After a cold opener with the villain Godspeed himself, which also serves as our first time with the serial killer Speedster, we reflect with a less than successful “day off” for Barry. He’s reeling from the aftermath of Godspeed’s latest attack and this assault has left him without his fellow Speed Partner/Girlfriend Meena.

The STAR Labs Team recuperates and  no one is taking it harder than Barry. His skills as a new age leader are thrown into question and the self doubt is all but apparent amidst the electrifying sparks from the cast. The personal losses are mounting for him and everything payoffs in this issue that feels like the emergence of the worst case scenario for Barry Allen and company.

The issue can be split into three parts: The aftermath, the realization, and the conclusion. Williamson and Di Giandomenico work hand and hand perfectly as they build up and continue to progress this new twist and turn to Barry’s life. On one hand,  Williamson is giving Barry a new found focus and goal in the form of making sure his Speed Group at STAR Labs remain safe and with proper training, on the other hand…we see a tired and true plot-line of there being a mystery killer on the loose.

It’s a great tit for tat because it all works in favor of the expanded cast in this title. Inner dialogue provided Barry keeps us engaged with his motives and actions, combined with Di Giandomenico and his expressive art perfectly suited for this comic, you have a title making you want to run to the explosive finish biweekly. This issue in particular with it’s three moving parts all flowing seamlessly together is rather foreboding. The previous issues problems and subplots come to a head for an emotional crux to tie past and present together. An emotional Wally reacts to the news and Di Giandomenico and Plascencia give us a stunning birth(?) behind the sadness and rage.

Another key factor that’s been a part of his world is the ability to pull and tug at as Barry Allen of the CPD and The Flash. This rings true as Barry seeks Iris’s help with the ongoing investigation to a point. Everyone has their part to play, no matter how big or small in Barry’s life and the creative team do everyone justice as always.

The final few pages collect all of the readers held breaths, tension, and worries and amplifies it as Barry confronts the revealed identity of Godspeed. The colors and panels all work with each other and you get the sense the pages crackling with the same energy that surround Barry and Godspeed. The use of yellow, red, white, and orange give a style to the visually flair the creative team have given to this title and the finale continues to hold the standard they’ve set. Everything about this sequence is a slamming to look at, the closeups on characters and costumes brimming with life and substance.

While the arc makes surprising reveals and twists to the ongoing story, the issue being a straightforward aftermath issue leading into the next phase is appreciated as it allows everyone to catch a breathe before the next huge moment of The Flash.