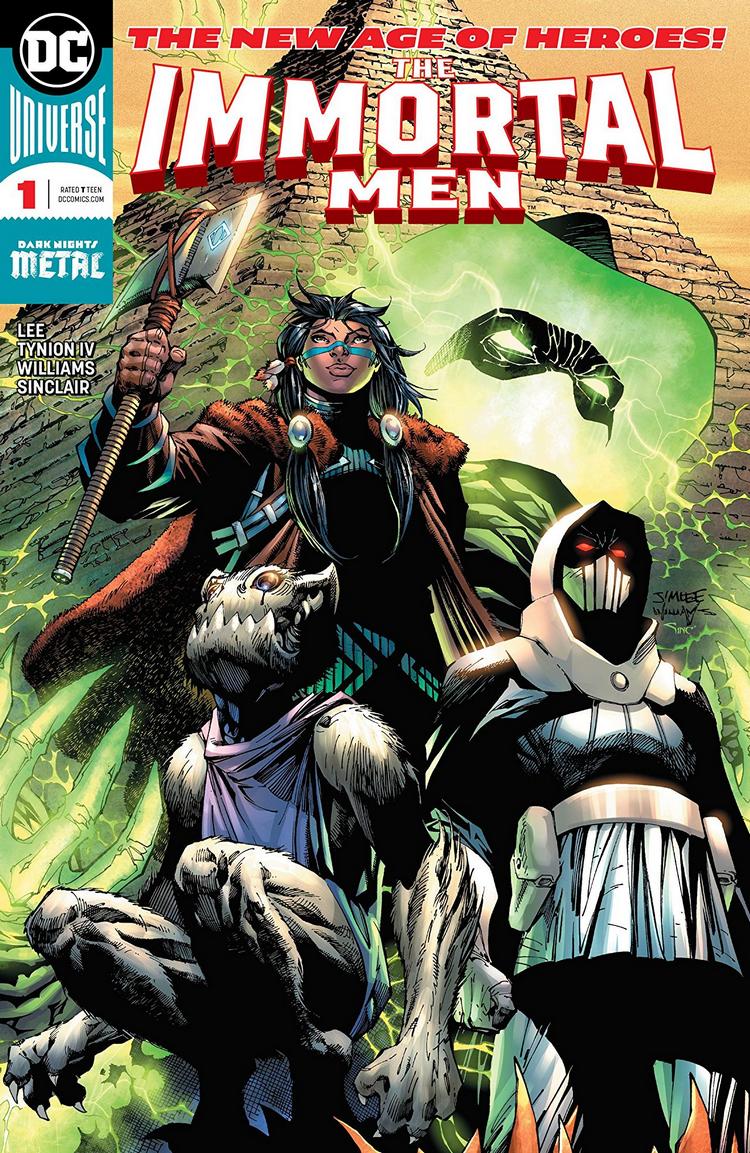 The secret history of the DC Universe unfolds as we are introduced to the Immortal Men and their centuries-long battle with the House of Conquest. A young metahuman named Caden Park in introduced to this battle… but which side will he choose?

The point-of-view character for the conflict, at least for this issue, is Caden Park, a seemingly ordinary New York City teen who, since adolescence, has had inexplicable dreams about a secret underground school that trains youths with extraordinary powers to prepare them for the secret war between the two houses. Now the visions have become more vivid, and by issue’s end he’s been drawn into that war.

This comic feels like a proloque to a much larger story. The hooks it offers are interesting enough, the big story it hints at is ceratinly intriguing and the characters introduced have a unique visual style. Nonetheless, this issue is more amuse-bouche than entree; it promises something interesting to come, but if you’re looking for a full meal you’ll leave unsatisfied.

If you want a sense of whether you’ll enjoy what Immortal Men has to offer, though, there’s a fairly easy point of comparison: The WildStorm universe of the mid-90s. The setup for Immortal Men bears a striking similarity to the Daemonite vs. Kherubim conflict that was the centerpiece of the metaplot that ran through titles like Stormfront, WildC.A.T.S., and Gen13 in the 90s. If you read and enjoyed any of those titles, and are interested in seeing the big ideas from that universe integrated into the DCU, then Immortal Men is an easy and whole-hearted recommendation. If you’re unfamiliar with 90s WildStorm, or already know that universe and aren’t a fan, Immortal Men at least provides a 2018 spin on WildStorm’s foundational ideas that may prove more palatable to you.

One welcome post-millenium feature of Immortal Men is the racial and sexual diversity on display even in this first issue. The lead is a Korean-American teen, who casually mentions his male friend Brandon’s boyfriend while in therapy. We only get a brief glimpse of the team he’ll presumably be joining, but it includes an American Indian woman with the codename Timber. The diversity feels casual and inclusive, though the authenticity of the representation remains a question for future issues.

Which leads to a larger issue: while this comic does a good job introducing the central conflict and hinting at deeper mythology, characterization is woefully minimal. We know that Caden Park is in therapy, that he has visions, that he wants to help people and make the world better, but we don’t really know much else about who he is as a person. And that’s a shame, because he gets more panel space than any other character. In particular, the members of the Immortal Men have almost no chance to establish character. Reload seems to be the leader, and Timber seems to be a headstrong fighter, while Ghost Fist doesn’t like New York City and Stray… is some kind of wolf-woman? Again, this will all presumably get fleshed out in future issues, but if this first issue inspires you to read more, it’ll be the larger plot and mythos that brings you back, not the characters.

The art is intensely detailed, in a realistic style that, at times, approaches the uncanny valley. Nonetheless, there are gorgeous scenes here, in particular the detailed views of the Campus before and after its destruction. The character designs are interesting, particularly for Timber and Ghost Fist, and the color work, while perhaps a bit dark, does a great job making both of those characters visually striking.

Immortal Men #1 is an interesting start to a series, but it’s very much only the beginning. Whether the story ultimately goes to new or exciting places or introduces us to engaging characters remains to be seen.